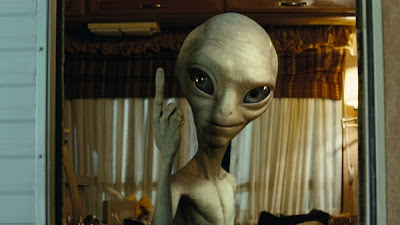 As a concept, “Paul” has more potential than any film to come around the bend in a long, long time. First and foremost the film stars Simon Pegg and Nick Frost, who also handled the scripting duties, and since Pegg is largely responsible for movies like “Shaun of the Dead” and “Hot Fuzz”, you can’t be blamed for expecting big things. Add Greg Mottola (“Superbad”, “Adventureland”) to this mix, and you seem like you’re well on your way to something wonderful.


Even the premise of “Paul” is almost perfect. Lifelong friends and super nerds Graeme Willy (Pegg) and The Author Clive Gollings (Frost) make a pilgrimage to America for that Mecca of geekiness, the San Diego Comicon. After wallowing in their own nerdgasmic crapulence, the pair sets off in a rented RV on a tour of iconic UFO hotspots in the Southwestern US. Along the way they meet colorful locals, run afoul of stereotypical rednecks (like SNL alum David Koechner), meet and fall in love with cycloptic-religious-nut-job Ruth (Kristin Wiig—who I can’t stand, but who wears a t-shirt with a cartoon of Jesus shooting Charles Darwin in the face), and, perhaps most importantly, meet a chain-smoking space alien named Paul (voiced by Seth Rogan), who escaped form a top-secret facility and is on the run from the government.

All of this should add up to one hell of a movie. Just thinking about this idea brightens my day, but, despite a few chuckles, “Paul” falls almost completely flat. Here’s a caveat, or qualification, or whatever you want to call it. It’s difficult to tell whether “Paul” is disappointing because it isn’t all that good, or if it’s because it’s disappointing because it isn’t great? Were there unreasonable expectations in play? I feel like I’m usually pretty good about keeping my hope in check, but I was, admittedly, excited to for this movie. Rationally, I feel like I went in with as open a mind as I could, ready for whatever the screen held in store for me. But can you ever fully clear your head of preconceptions, biases, and expectations?

It’s not that “Paul” is a bad movie, it is pleasant enough. But at the same time, it just isn’t particularly good. Like I said, the set up is good, and Pegg and Frost are a great comedy team. It is their charm and chemistry that carry the film as far as it can go. Without them, it wouldn’t even be worth watching. There are some fun nerd bits, like a redneck re-creation of the cantina scene from “Star Wars”, and a swarm of faux-Princess Leia’s. The best parts, the biggest, most sincere laughs, all stem from the clash of British culture with the American way of life, like when a small town sheriff questions Graeme and Clive about how cops in the UK are supposed to shoot anyone without guns?

For every high point, there are seemingly endless, and tiresome dick jokes, gay jokes, and Clive-has-a-child’s-bladder jokes. I’m a guy who loves a good dick joke, but the humor was so run-of-the-mill, so generic (you’ve seen it all many times before), that it doesn’t move you. There is an initial, ha, then you shrug it off and move on. A good point of comparison is how I felt about “MacGruber”. In the theater it was mildly entertaining, but walking out I knew I would never have to think about it again, and in fact, it was so bland and vanilla that it was actually difficult to remember anything about it. “Paul” is like mild salsa, it may taste okay, but really, what’s the point?

The script feels lazy, like Pegg and Frost weren’t even trying. “Paul” is nowhere near as clever as it thinks it is. Every time you can tell there is a gag locked, loaded, and coming down the chute, they make the most obvious joke, like Paul sticking his finger through the hole in a bagel while they talk about anal probing. The bad guys are tired clichés. Jason Bateman is an ultra-serious government agent saddled with a pair of slacker rookies (Bill Hader and Joe Lo Truglio) who would rather play hide-and-seek behind a giant cactus than man a roadblock.

For all of it’s pop culture references, including, but not limited to, “ET”, “Star Wars”, “Star Trek”, “Close Encounters of the Third Kind”, “Alien/s”, “Police Academy”, “Blues Brothers”, and tons more, “Paul” never becomes anything more than a mediocre road trip movie with a smart-alek alien who likes to smoke and drink beer. There is a world of potential, fun characters, and a great set up, but, like the parade of awesome cameos (including Jane Lynch, Jeffry Tambor, Jane Lynch, and Sigourney Weaver) that are completely wasted, it is squandered on ordinary jokes, and a series of toothless running gags that don’t even work the first time.

You can’t be blamed for expecting more from “Paul”, but you should also expect a let down. It feels like a movie aimed at a teenage audience. Who else would appreciate a CGI alien mooning his pals from the window of an RV? But the R rating, which primarily stems from Kristen Wiig stringing together random naughty words (another dead horse that is mercilessly flogged), will prevent all but the most industrious teens, and those with passable fake IDs, from seeing “Paul”. Last year “Scott Pilgrim” and “Let Me In” proved beyond a shadow of a doubt that movie nerds alone can’t open a movie. I’m normally the first to decry a movie for castrating itself in a quest for a lower rating, but in the case of “Paul”, already toothless and mild, that may have been a smart business idea, because even though every geek out there is going to see this, that won’t be enough.
Posted by Brent McKnight at 9:51 AM