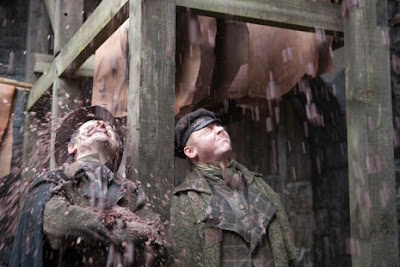 What’s not to like about a black comedy about grave robbers starring Simon Pegg and directed by John Landis? Nothing, that’s what. Throw in Jessica Hynes and you’ve got a miniature “Spaced” reunion. And what the hell, why not add Gollum himself, Andy Serkis, into the mix just to up the creepy factor? You get all of this and more from the new film “Burke and Hare”. While not earth shattering, this is Landis’ best feature film since “Beverly Hills Cop III”—though he did helm a couple of episodes of “Psych”, which I have to give him credit for.


It’s 1828, and apparently Scotland is a grim place to be. The citizens live in abject squalor, everyone is grubby and unemployed and broke, and the best way to get rid of your own poo is to dump it out of a window, which leads to some disgusting situations. In fact, the only thing the city of Edinburgh has going for it is a dueling pair of world renowned medical schools, one led by Dr. Monro (Tim Curry, creepy as ever), the other by Dr. Robert Knox (Tom Wilkinson). The best way to teach medicine to new students is by dissecting human cadavers, but when Monro’s school bogarts all the fresh corpses, a new growth industry springs up in the Scottish underground.

William Burke (Pegg) and William Hare (Serkis) are small time con men without much game to speak of. Their best scam to date is selling cheese mold as a magical cure-all. Hare is married to Lucky (Hynes), a saucy alcoholic who runs a seedy boarding house, and when one of the lodgers dies, the enterprising friends stumble upon a lucrative new business venture. But how many random dead bodies do you just happen upon in a given week? Not many, even in Edinburgh in 1828. Grave robbery is a dangerous, not to mention gross, endeavor, and before long they’re killing random folk in the streets. Their shady dealings lead them afoul of the law, and local a local crime boss who wants his cut. But those aren’t the only troubles. Burke, with his newfound wealth, takes a shine to Ginny Hawkins (Isla Fisher), an actress turned prostitute, who wants to stage an all female production of “Macbeth”. Smitten as all hell, Burke promises to fully fund the production, thus kicking his need to continue on with this unpleasant business into high gear. Talk about more money, more problems.

Based on a series of real life killings, there is a dark absurdity to “Burke and Hare”, one which makes you implicit in their crimes. Like watching an episode of “Dexter”, where you root for the serial killer to kill in order to get his mojo back, you actively cheer the protagonists on towards murder. As the stakes increase, so does the moral tension. Burke and Hare aren’t bad men, even though they kill people just to pawn the corpses. They don’t necessarily like what they do, but they’re driven forward by dire, desperate circumstances. Hare’s newfound go-getter attitude saves his marriage, while if not for their new trade, Burke would never be able to land the love of a nice looking lady like Ginny.

This duality is represented visually through a series of shots of mirrors and other reflective surfaces, but it is not the only double-sided coin in the film. The main subplot of “Burke and Hare” is about old versus new, about stasis versus progress. Monro’s medical school is firmly rooted in the medical tradition where doctors were little more than skilled butchers, hacking off limbs willy-nilly. On the other hand, Knox is at the forefront of medical advancement, pushing the boundaries in order to save hundreds, thousands, perhaps even millions of lives.

“Burke and Hare” is funny and dark, and full of the quick, clever humor that you’d expect from two alums of “Spaced”. Pegg is charming and personable as the love struck Burke, and Serkis runs through his scenes with a maniacal glee. Hynes is good, though totally underused here, but Fisher does her thing as the chipper, sexy, aloof thespian. Like I said earlier, you won’t be blown away, but “Burke and Hare” is definitely worth watching, and is far better than most comedies floating around out there these days. Hell, it’s better than “Paul”.
Posted by Brent McKnight at 3:17 PM