'The Tree of Life' Movie Review 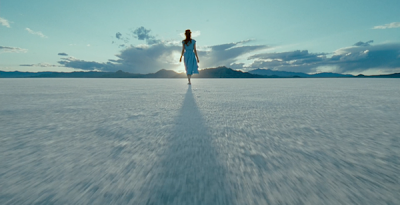 When you consider the career of a filmmaker like Terrence Malick you have to mention the fact that in his career, now spanning more than forty years, the guy has only directed five films. Sure he’s written a bunch of others, and produced a few more, so it’s not like he’s resting on his laurels, but no matter how you look at it, the man takes his time. So it’s understandable that each of his movies is a bit of an event, and his latest, “The Tree of Life”, is no exception. The whole thing has been shrouded in mystery from the get go. We knew Brad Pitt and Sean Penn were in the movie, but additional details have been sparse at best.

Having actually sat down and watched “The Tree of Life”, I’m left with the definite impression that Terrence Malick has now made his “2001: A Space Odyssey”. It is one of those surreal, dreamlike movies where everything frame is a metaphor, and it is absolutely exhausting to sit in a theater and pay attention to for more than two hours. Holy crap. Visually “Tree of Life” is one of the most beautiful films I’ve seen in years. Everything seems to be shot from a low angle, and you spend the entire movie looking up, a feeling that is only accentuated by craning your neck to gawk at the screen. There is a tight, almost claustrophobic feel to the framing, and you practically feel the actor’s wet hot breath on your cheek. At times it can be disorienting, mimicking the disorder and bewilderment of the characters. “The Tree of Life” is breathtaking to look at, it really is stunning, but it is really just 138 minutes of whispering about God.

The movie starts with the idyllic O’Brien family in the 1950s. Brad Pitt and Jessica Chastain play the parents to three young boys, though only one, Jack (Hunter McCracken, possibly the best name ever bestowed upon a mortal human), has a name. Tragedy strikes when one of the sons, it is unclear which, dies, and the O’Brien family is thrown into turmoil. Then you jump to the present, where the adult Jack (Sean Penn), now an anonymous sort of successful businessman, haltingly stumbles through his days, still trying to wrap his head around the enormity of his loss. None of this is as straightforward as it sounds. There is almost no dialogue other than a few stretched out, languished words, and everything is implied. Especially in the 50s scenes, you get the feeling that you are watching home movies, the view is that intimate.

Then you’re in space. What follows for the next little while is best described as a montage of the beginning of existence. There are planets and clouds, volcanoes and lava, bubbling pits of primordial ooze. Then you come to close up shots of cellular division leading into invertebrate life. The camera sweeps through barren, desolate landscapes that give way to lush, fertile greens. You pause for a minute to hang out with some dinosaurs. This comprises roughly the first forty minutes of “The Tree of Life”, and ultimately you wind up back in the 1950s, hanging out with the O’Brien family.

Here the movie settles down into a more traditional narrative structure, or at least as close as you’re going to get, for the bulk of the remainder. There is still a lot of whispering and long, yearning looks shown in close up, but there are actual scenes and dialogue and characters and such. Now “The Tree of Life” becomes a dreamy coming of age story. Pitt’s father may be slightly overbearing, which contrasts with Chastain’s playful, childlike wife, but initially everything appears happy and tranquil. But like the “golden age” of America, which we all know is largely an idealized lie, everything is not so great as it seems. Pitt reveals himself to be more and more of a tyrant, capable of jarring explosions of violence, and Jack is torn between his mother and father. Even as their distinct and contrasting personalities that battle and rage inside of him, the world around him grows increasingly sinister, and he has to come to terms with the loss of innocence.

Like “2001”, “The Tree of Life” is one of those movies that I neither love nor hate. It is interesting to be sure, and I can appreciate it from an artistic standpoint, but there are times when it plods and drags horribly. As a work of art it is so thematically dense that you can discuss it endlessly, approaching it from almost every conceivable angle. Like I said, it is phenomenal to look at, and in that regard is definitely worth watching, but as entertainment, as something you actually want to sit down and watch, which I’m well aware is not necessarily the point, I’m not so certain how I feel about it. Like most “art”, I find that while I may be intellectually drawn to it, I’m not always compelled to enjoy it.
Posted by Brent McKnight at 8:28 AM