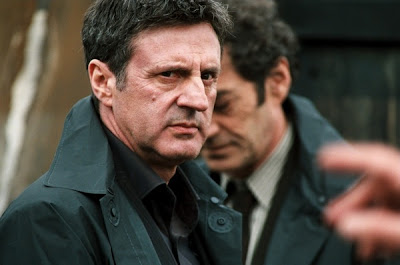 Originally released in 2004, French cop drama “36th Precinct” is hitting region 1 DVD and Blu-ray courtesy of Palisades Tartan. The film starts strong out of the gate, and the first half favorably compares to crime films like “Heat”. There is action, drama, flawed characters, cops who play by their own rules as they dispense their own brand of justice, and a general level of badassness. It is tense, packed with violence, and kicks some serious ass. That is until it falls completely apart halfway through.


Somewhere in the middle “36th Precinct” shifts from an admirable action yarn to a melodrama about the internal politics and power struggles of a police force. It’s like a soap opera about cops, or an episode of “Law & Order”. Either way, out of nowhere all the momentum stops and the pace comes to a total, grinding halt. You keep thinking it is going to pick up again as it nears the end, you keep hoping for some redemption, but, sadly, that is a waste of your time, as things never get back to where they were, and you’re left wondering what the hell happened.

A Parisian gang outlaws has pulled off seven armored car robberies in the last year, killing everyone, leaving no witnesses. Leo Vrinks (Daniel Auteuil) is the head of the “Mob Squad”, and Denis Klein (Gerard Depardeiu) is the head of the Bureau of Detectives. The two are bitter rivals, though they were once close friends, until a woman, Valeria Golina, came between them. Now, whichever one manages to bring in these criminals before they strike again will be promoted to the senior position in their precinct. Vrinks is an old school cop, one who is not above roughing up a couple of thugs who raped a prostitute, or helping cover up a stool pigeon’s crime in order to get information on an even bigger crime. Klein is career driven and power hungry, only in the game to benefit himself and gain control. He wants to climb to the top, and will do anything necessary to get there.

When “36th Precinct” deals with the pursuit of the robbers, it is awesome, and if it had continuted on like this, it would rank among the best crime films in recent memory. The grim, grizzled cops chase down leads, exploit their underworld contacts, and hunt down their quarry until they are nearly indistinguishable from the criminals they’re after. You hang on every scene, on every twist and turn. Auteil and Depardeau are perfect in their mutually antagonistic roles. Right in the middle there is a huge, epic shootout, and you’re stoked. Life is good. You’re excited that the choices you’ve made in your life led you to the moment where you put this disc in your DVD machine.

But then something goes horribly awry and all of the action comes to a screeching halt. It is such a letdown, such a crushing disappointment. There are betrayals and backstabbing and treachery, but it’s all done with such an overly theatric approach that it is groan inducing. Nothing happens. In the first portion of the film there are regular action scenes and badass moments, like the cops shooting a guy, but not killing him, and leaving him naked in a shallow grave in the middle of the woods just to teach him a lesson about fucking with them. But all of that stops, and instead all you are left with is tepid histrionics and false sentimentality that never amounts to anything.

The DVD/Blu-ray of “36th Precinct” comes stacked with a nice collection of bonus material. A 30-minute making-of featurette kicks things off with a look behind the scenes of filming. Topics run the gamut from the genesis of the script, to discussions of shooting, and watching director Olivier Marchal work with his actors. In another extra you get an in depth look at how the crew selected the ample supply of guns featured in the film. They take into account the character and actor, their size, style, attitude, and match the appropriate style of weapon to each personality. It is an interesting glimpse into the process, into a significant choice that most of us take for granted when we watch action films.

A recent 10-minute interview with Marchal is, in my opinion, the best of the bonus features. An ex-cop who spent time on the anti-terrorist squad, much of the script is based on his own experiences, or on stories he heard and things that happened when he was on the force. He used his history to try to lend the film an authenticity, which carried over into the way he filmed the action sequences, close up and over the shoulder in order to make them feel real. Rounding out the bonus features are a couple of trailers, and a compilation of footage from a wardrobe run through that is notable chiefly for documenting the back and forth banter between Marchal and his actors, which gives a good feel for the atmosphere on set.
Posted by Brent McKnight at 10:32 AM