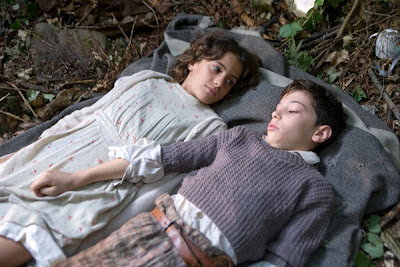 “Black Bread” starts of with a scene of such stunning violence—without giving too much away, it involves a sledgehammer and a horse, among a slew of other very nasty things—that it casts a shadow over the rest of the movie. Set in post-Spanish Civil War Catalonia, the film creates an atmosphere where the potential for death and hostility to erupt exists around every corner, in every situation. From the outset you learn that no place is safe; not the family hearth, government offices, and certainly not the multitude of caves, woods, and fields where the 11-year-old Andreu (Francesc Colomer) grows up.


Andreu witnesses the final moments of his best friend, and the dying child gurgles the name Pitorliua, the name of a ghost said to haunt their village. His father, Farriol (Roger Casamajor), is accused of the murder, and must go into hiding. Since the boy’s mother, Florencia (Nora Navas), works ridiculous shifts in a sweatshop yarn factory, she sends Andreu to live with his grandmother, aunts, and a collection of cousins, including Nuria (Marina Comas), who had one hand blown off by a bomb. The two wounded children form close bond, and are forced into the grown-up world of secrets, lies, jealousies, rumors, politics, and redemption. Ultimately Andreu is forced to make arduous, soul-rending choices about his dreams, family, and loyalties, decisions that are difficult—at best—for adults, let alone a child trying to come to terms with the world.

Andreu begins as a kind, wide-eyed innocent—sneaking bread to a consumptive, contagious inmate at a monastery, a young man who may or may not be an angel—and he believes the best in people, until little by little it is revealed to him that what his father tells him is true, that people are capable of extreme acts of evil. Andreu and his cousins still believe in magic and curses and hope and dreams, but when faced with the devastating press of reality, they can’t escape into fantasy for long, and are compelled to adapt and come to terms with the harsh world they inhabit. Nuria serves as a guide for Andreu through these treacherous waters. Most of the idealism she had disappeared with her hand, and what remnants lingered after that vanished when she discovered her father’s body hanging from the rafters, a suicide. She is pragmatic, and uses what she has to get through and better her situation—doling out sexual favors for benefits. She’ll show you hers, for a price. It speaks well of their talent that two such young actors can carry parts with this much depth and weight, roles that would crush most adult actors into flattened, mushy little pancakes. Colomer and Comas both deliver subtle, nuanced, and at times heartbreaking performances.

There are definitely supernatural elements at play in “Black Bread”, enough to earn it comparisons to other Spanish-language films like “The Devil’s Backbone” and “Pan’s Labyrinth”, but it is cut from a different cloth. Atmospherically and tonally it resembles those films, and definitely belongs in that discussion, but for all the talk of ghosts and monsters, and grandma’s fireside horror tales, the world of “Black Bread” is firmly rooted in the physical, corporeal realm. The characters are certainly haunted, all of them to some degree, but not by ghosts, by decisions and actions that they cannot take back, and pasts they cannot escape. And monsters and horrors abound, but not the kind of myth and legend, these are the much more human, much more frightening variety, the ones that can actually reach out, touch you, and do you harm.

As the film progresses Andreu slowly unravels the truth about his father, his mother, Nuria, Pitorliua, the twisted nature of their town and their story, and the part he is to play in everything. Anchored by skillfully executed cinematography that lends an air of urgency to each scene, “Black Bread” is a cynical, almost callously realistic, meditation on defeat—as the alcoholic school teacher says, “woe the vanquished”—and what it means to win or lose, and the lingering effects of ideals and politics in war, even after the war has supposedly come to a conclusion. Based on the acclaimed novel by Emili Teixidor, the film nearly swept the Goya Awards—think the Spanish Oscars—and is making the festival rounds, screening at the Seattle International Film Festival, and will hopefully find a distributor.
Posted by Brent McKnight at 4:39 PM