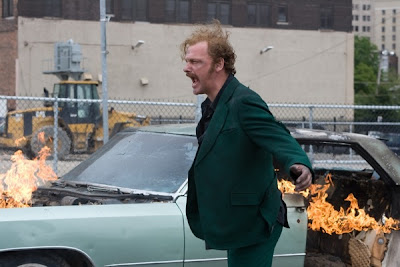 “Kill the Irishman” tells the true-life story of Danny Greene (Ray Stevenson), a legendary Cleveland gangster and folk hero. In the 1970s Greene and a rag tag group of modern day Celtic warriors waged war against the Italian mob in Northern Ohio. The most obvious comparison for “Irishman” is “Goodfellas”, another film that traces the rise of a figure in organized crime from childhood, through the early stages of his criminal career, into the glory days, and his ultimate downfall. Green was most notable for being the man the mob couldn’t kill. Seriously, the guy was like a freaking cat he had so many lives. At one point a house falls on him and he walks away unscathed. He survives bullets, stabbings, and car bombs. Bombs are the apparent weapon of choice in this particular region, and in one summer, no less than 36 go off. There is a pretty amazing montage of exploding automobiles.


Greene grew up in a troubled, predominantly Italian neighborhood. He’s a tough kid, who, despite a voracious appetite for books and learning, had little use for school. After a stint in the military, Greene works on the docks as a stevedore, but he has bigger ambitions, taking over the union, and using it to one, empower the largely Irish work force, and two, for his own financial benefit. When that takes an abrupt turn for the worse, he moves on, hooking up with various gangsters like local big shot John Nardi (Vincent D’Onofrio), and Shondor Birns (Christopher Walken), a notorious loan shark. With the help of childhood friends like Billy McComber (Marcus Thomas), and former boxer Keith Ritson (Vinnie Jones), Greene muscles his way into the lucrative garbage-hauling racket, and so on and so forth.

Greene has balls like nobody’s business, even going on the news, daring his enemies to come after him, telling them exactly where to find him. Stevenson channels this cockiness and charm, making it his own with a charisma and larger than life personality that made Greene local celebrity. While not afraid to strike back at anyone who came after him, Greene is also a Robin Hood type figure in Cleveland. He gives back to his community, helping out those in need, feeding the hungry, keeping the neighborhood safe for the civilians—he runs off a group of Hell’s Angels who cause a ruckus—and all that noise.

“Kill the Irishman” is executed well enough, and while it is middle of the road entertaining, it’s ultimately empty. It has all of the bells and whistles of an underworld biopic, but it never goes beyond the surface, and the whole film watches like a caricature of a gangster movie, where everything that happens, happens because that is what is supposed to come next. There’s no real struggle, conflict, causality, or motivation, and things simply happen too easily. Instead of showing why things happen, they just sort of happen. One prime example is with the Greene’s home life. There is supposed to be strife between Danny and his wife, Joan (Linda Cardellini), but you never see any of it, and when she leaves him in the middle of the movie, that’s just it, there is nothing more to it. There’s no build up to that moment, nor is there any fallout following it. The topic never comes up again, and doesn’t impact Greene, or the film, ever again.

“Kill the Irishman” is like a history book, where this and that and this other thing all happen at the appropriate moments, but there is little in the way of character development or emotional connection. You see Danny Greene do things and go through the motions, but you never know what he feels about any of it. It isn’t a bad movie, and there are admirable things about it, but at the end of the day, it isn’t anything special, and comes across as “Goodfellas” lite.

Out on DVD and Blu-ray today from Anchor Bay, “Kill the Irishman” only has one bonus feature, but it’s a doozy, an in depth, hour-long documentary about the real Danny Greene. There are interviews with his wife and daughter, retired figures from the Cleveland underworld, and assorted others who knew, or at least knew of Greene and his exploits.

Like the movie, the documentary traces Greene’s life from his humble beginnings, through his rise and fall. They explore his role as a Robin Hood, but never shy away from his darker, more violent side, which the film does. In fact, you get a much more rounded, complete picture of the man from this extra than from the actual movie, and they establish some of the depth that the fictional portrayal lacks. One thing you realize from watching the documentary is that, at least as far as the details are concerned, “Kill the Irishman” is factually quite accurate, something of a rarity among biographic films. At the same time, you can’t help but wonder, did this rigid adherence to the facts negatively impact the film from a narrative and character perspective? If they had played a little looser with the details, would it have been a better movie?
Posted by Brent McKnight at 4:27 PM