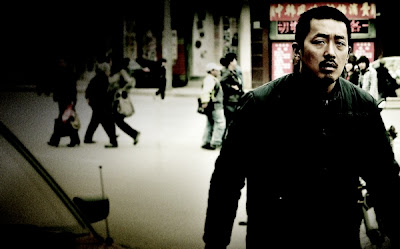 After his debut film, 2008’s “The Chaser”, Korean director Na Hong-jin was definitely on a lot of people’s radars, mine included, and many of us have eagerly been waiting for his newest crime thriller, “The Yellow Sea”. Fresh from Cannes, “The Yellow Sea” just made its North American premiere at the Seattle International Film Festival. Be warned, there is an absurd amount of hatchet fighting and stabbing, not to mention people getting beaten to death with a large bone. If that sounds like a good time to you, it certainly does to me, then this movie is right up your alley.


The region where the borders of North Korea, China, and Russia come together, forms a sort of modern day wild west, where more than half of the population relies on illegal activity in order to survive. In Yanbian, on the Chinese side of the border, Gu-nam (Ha Jung-woo) wiles away his days driving a cab, and spends his nights getting drunk and gambling, and losing horribly. In fact he’s so bad at mahjong that he has built up a sizeable debt to some small-scale hoods. His wife went to Seoul to work and send back money, but it’s been months since he has heard from her, and he’s tortured by visions of her wild, passionate, imagined affairs. So he’s broke and crazy and unraveling at the seams. When local crime lord Myun (Kim Yun-seok) offers to erase Gu-nam’s debt in exchange for a contract killing in Seoul, Gu-nam, at the end of his rope, reluctantly accepts.

Gu-nam is smuggled into South Korea by what is best described as the Korean equivalent of a coyote, in the claustrophobic, nightmarish belly of a creaky ship. While scoping out his target, he gets distracted by looking for his wife, who has mysteriously disappeared from her new life as well as her old. With time running down, and Gu-nam about to act, he finds himself in the middle of a series of unexpected events, and the situation spirals quickly out of his control. Before long Gu-nam is running from Korean gangsters, the Chinese mafia, and the local police, all the while looking for answers and side of stone cold revenge.

“The Yellow Sea” starts off with a deliberate, calculated pace that builds exponentially. Poor choices, lies, deceit, and deception pile on top of one another, and Gu-nam’s predicament escalates into a crazy, violent mess. Over time the tension, action, and savagery of the film gather speed, like a stone rolling down hill, bouncing and careening and crashing through everything. The plot twists and turns and circles back on itself; just when you think the story is going in one direction, Na, who also wrote “The Yellow Sea”, spins the action on its head, defying your expectations. You think one group is going to hunt down another, only to discover that the opposite is true; when it looks like Gu-nam is going left he breaks right. At first you think Myun and his crew are little more than rough-around-the-edges pseudo-rednecks who are going to be eaten alive by the big city gangsters, but Myun is a madman, and not afraid to take down a whole crew with a hatchet, wearing only his underwear. No matter which way you look at it, Gu-nam is totally fucked. He is on the run from everyone, he gets shot, beaten, kidnapped, tormented, and just generally besieged from all sides. As the story escalates, so does the level of hell he’s put through.

Despite the serious level of violence and ample action, including a handful of great chase scenes and insane car crashes, there are no guns in “The Yellow Sea”. The brutality is perpetrated almost exclusively with knives and axes. It is a much more personal and savage style of violence, the kind that results in a person being covered head to toe in blood spatter. The film is bleak and grim, but there is also way more humor than you expect, though it is definitely of the darker, gallows type. A good point of reference is “Reservoir Dogs”, which “The Yellow Sea” overtly references at one point. It has that sensibility where the violence and savagery is so heavy and brutal that all you can do is laugh at it.

“The Yellow Sea” is full of great performance, stunning, gore-soaked fight scenes, and frantic action pieces, like when Gu-nam takes out half of Seoul driving a delivery truck. It fits in with other Korean films, like “A Bittersweet Life” and “Oldboy”, where a lone, tragic figure goes up against staggering opposition, but Gu-nam is cut from a different cloth. He’s not an outlaw, a gangster, or any sort of real criminal at all; he’s just a desperate man in dire straights. The film is a nice, controlled burn, and you feel Na’s steady hand on the controls.

Released in Korea in December 2010, “The Yellow Sea” was an enormous box office smash. Now that it has been making the international festival rounds, I can’t imagine a distributor won’t pick this up for a domestic release, and hopefully you’ll all get a chance to see it.
Posted by Brent McKnight at 10:54 AM