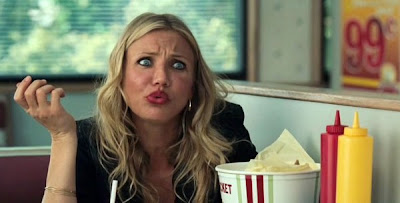 “Bad Teacher” is mediocre. I could stop there, and that sentence alone would more than likely be enough. But I’m not going to stop there, because that’s just the kind of dude I am. However, if you want to stop reading there, I doubt I’m going to say anything more insightful than “Bad Teacher” is mediocre, because that’s about all it is, a middle of the road comedy. There are highs, and there are lows, but for the most part, the movie hovers between these two extremes, not particularly great, but not particularly awful. To paraphrase Lisa Simpson, “Bad Teacher” is meh, M-E-H, meh.

Cameron Diaz, and that Muppet-looking head of hers (is it a coincidence that Jason Segel co-stars with Diaz in this film and also wrote the upcoming “Muppet” movie? I wonder), plays Elizabeth Halsey, the titular educator. A shallow, manipulative gold-digger, Elizabeth is dumped by her cash-cow fiancé, which forces her to keep teaching. See, she hates kids, and her teaching style involves showing movies like “Stand and Deliver”, “Lean on Me”, and “Scream”, while she nurses a hangover in the dark. When Scott Delacorte (Justin Timberlake), an earnest—not to mention ridiculously loaded—substitute teacher arrives on the scene, Elizabeth sees a new source of income. Unfortunately for her it will take a new set of boobs to gain his affection, so she starts up a collection for a fresh pair of surgically enhanced knockers.

When “Bad Teacher” works, it works despite itself. The story is awful, Elizabeth’s conflict with the perky teacher-next-door (Lucy Punch) is obvious, and there is absolutely no one to root for. The main character is an atrocious human being, and never grows or changes. When Elizabeth does have a “change”, and begins teaching in earnest, it is not a real shift, motivated as it is solely by money. In reality the movie is just a bunch of gags stitched together, and I know I’m looking too deeply into this, but eventually you want something more than that, especially given the fact that none of the bits are particularly funny. Like everything else, the humor falls right in the middle of the road. Marketed as a hard R, “Bad Teacher” barely ventures beyond PG-13 territory. There is some cursing, casual drug use, and one moment where Diaz fondles some fake breasts, but in comparison to any R rated comedy in the past few years, it is tame and toothless. It pales in comparison to “The Hangover 2”, which itself isn’t a great achievement. Though there is possibly the best dry-humping scene in recent memory. Dry-humping is always funny.

Justin Timberlake has actually become a passable dramatic actor, but his role in “Bad Teacher” feels a lot like an extended Saturday Night Live sketch. Maybe that’s just his comedic style, but after the halfway point, you get tired of his shtick. Luckily when things get stale, Segel shows up on the scene. He plays Russell Gettis, a pot-smoking gym teacher with a crush on Elizabeth, and he has a smart-ass charm and subtle humor that is a nice counter to the overt dick sucking jokes, fart noises, and teenage boners that occupy the rest of the film.

There honestly isn’t much else to say about “Bad Teacher”. It isn’t horrible, but it isn’t anything that you need to run out and see. If this had come out in February or March, it would have been more noteworthy, but in the midst of summer blockbuster season, especially sandwiched between all the big-time comic book movies coming out this year, “Bad Teacher” fades into the pack. It is funny enough to be worth renting at your local video store, if you still have one of those things, or adding to your Netflix queue. Like the Farelly brother’s latest offering, “Hall Pass”, “Bad Teacher” is entertaining enough to keep you occupied for 90 minutes if there is nothing better on TV on a slow weekend afternoon. It’s one of those movies that you’ll watch, chuckle at, and never think about again. When your buddy asks you what you did last night, and you tell him that you watched “Bad Teacher”, he’ll ask you how it was, and you’ll pause, think about it for a second, and nod your head while shrugging. And that’s all that really needs to be said about that.
Posted by Brent McKnight at 6:29 PM