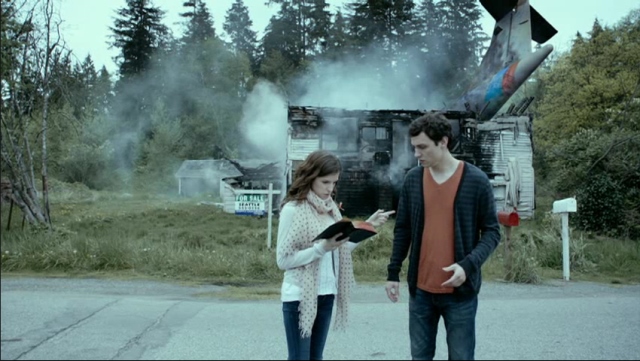 Rapture-Palooza is a prime example of a movie that has great concept, but that struggles to stretch said concept into a feature-length motion picture. The idea is so absurd that you’re immediately drawn in, but the execution leaves much to be desired. In the end, the finished product, now out on Blu-ray and DVD, is little more than a footnote in a summer that includes superior apocalyptic films like This is theEnd, The World’s End, and It’s a Disaster, which is a shame, because it has a fantastic cast.

Lindsey (Anna Kendrick) and Ben (John Francis Daley) are a young Seattle couple, very much in love, despite Lindsey’s continuing virginity. They enjoy bowling together, and dream of opening a sandwich shop. One night, a league night no less, something strange happens: the Rapture. As in, the biblical Rapture, where all the believers are sucked up into heaven for an eternity of bliss with our creator, while the rest are left to fend for ourselves, coping with all the fun games the Book of Revelation has in store for us. This includes locusts that follow you around screaming “suffer,” swarms of foul-mouthed crows, and, of course, occasional blood rain.

As you can imagine, this sucks, but the two take it all in stride, going about their daily lives much like before. That is, until the antichrist shows up, in the form of The Beast (Craig Robinson), whose real name is Earl. Beast takes an unhealthy interest in Lindsey, singing numerous songs about her booty, and plans to take her as his wife and future mother of his children. She doesn’t have much say in the matter, considering that the alternative is Beast killing everyone she knows, including Ben. But they have a plan, one that is so crazy it just might, but probably won’t, work.

There are moments in Rapture-Palooza that are really, really funny—with this cast, it’s almost impossible to not to have that. Rob Corddry plays Ben’s dad, who has sold his soul to Satan, and works security for Beast. Paul Scheer is a pot-smoking security Wraith. Ana Gasteyer is Lindsey’s mom, who is the only person un-Raptured, and John Michael Higgins plays her frazzled father. And Thomas Lennon shows up as her undead neighbor who endlessly mows his lawn, with or without a lawnmower.

It is the charisma of the players, and the inherent sarcastic likability of Lindsey and Ben, that is the only thing that keeping Rapture-Palooza afloat, but even that can’t carry the  load for an entire film. Unfortunately, the majority of the movie, anything that falls between wacky, improvised bits, is completely flat and lifeless, with far too much filler. A film can’t skate by on personality alone, even when this considerable collection.

The whole film is cheap and quick and absurd. You get the impression that it was an absolute blast to make, but despite an inspired concept, the film fails to be anything more than mildly amusing for the first hour. As you build towards the climax, the pace, and rate of laughter, pick up, but getting there takes some time and patience you may not have. You can’t help but feel like screenwriter Chris Matheson (Bill and Ted’s Excellent Adventure) and director Paul Middletich started with the end and worked backwards, relying on the improvisational chops of the cast to fill in the gaps.

For a movie that is so innately heretical and blasphemous, Rapture-Palooza is surprisingly middle of the road. You never go fully over the top into full-blown sacrilege and irreverence, which is where Rapture-Palooza really could have left a mark. Instead, what you walk away with is a bland farce, one that, while you won’t say is bad by any means, doesn’t have much to recommend it. Which is, again, a shame considering the talent involved.

The sound mix on the disc is really up and down. Some dialogue is subdued and quiet, while score and ambient noise come in at an eardrum crushing level. It’s hard to find a suitable volume to watch the film at.

Given the cast, you’d be right to assume there are some fun bonus features. A commentary with Robinson, who also executive produced Rapture-Palooza, Corddry, and Rob Heubel, is the obvious centerpiece, and is a much fun as you expect. The rest, however, feels like the movie itself, there to take up space. There’s an 8-minute “It’s Good to Be the Beast,” featurette that mostly makes fun of you for stooping so low as to watch the extras on a film like Rapture-Palooza. A short gag reel is fine, but underwhelming, as are the deleted scenes. Considering that the film is shockingly brief (the box says 85, but that’s a padded estimate, and the real movie ends at the 75-minute mark). The whole package is forgettable, bland, and feels like a missed opportunity.

Posted by Brent McKnight at 6:08 PM