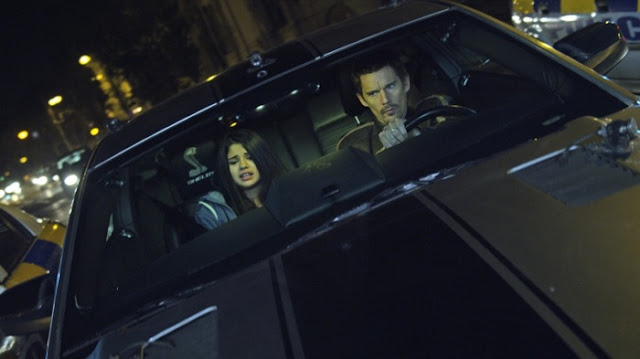 Maybe I’m wrong, but I get the distinct impression that I’m the only person in the free world who is actually going to give “Getaway” a positive review. We’re not talking about a great work of cinema here, and in many ways this is a terrible, terrible movie. I completely recognize this fact, but that doesn’t mean that this is a film without certain charms, and, taken on its own terms, this is a successful endeavor. Produced on the cheap by After Dark Films, most known for their low-to-no budget “films to die for,” “Getaway” is essentially the action equivalent of their horror fare. The only reason this didn’t go straight to video is because the only three real cast members are Ethan Hawke, Selena Gomez, and John Voight.

The plot is thinner than tissue paper. Former stock car racer turned wheel man turned reformed wheel man, Brent Magna (Hawke)—which is an exploitation movie hero name if I’ve ever heard one—has to drive a tricked out muscle car very, very fast in order to save his kidnapped wife Leanne (Rebecca Budig) from a villain (Voight) who is literally faceless. Along the way he picks up Gomez when she tries to carjack him. That’s it. She doesn’t even have a name. “Getaway” is the kind of movie where characters have names like the Voice, the Man, the Kid. It’s not trying to be a throwback to 70s car crime movies like “Vanishing Point” and “Two-Lane Blacktop,” like movies like “Death Proof,” it is that kind of movie. There are no winks and nudges here. Aside from some modern technology, you could have seen this as the back end of a double feature at a drive-in in 1975. It also has the same strengths and weaknesses inherent in those films.

“Getaway” is a movie that has a concept and set up, and little else. There are no characters to prop up the farce of a story. The whole movie is Brent downshifting and scowling while Gomez alternates between trying to be tough, chastising Brent for his driving, and screaming, sometimes all at once. You come to recognize that her acting skills haven’t progressed much beyond her time on the Disney Channel. Two things you can appreciate, however, are that the film never tries to push any sort of awkward love connection between the leads, and Gomez is never forced into a “get sexy” moment where she has to push out her boobs and flirt with some sleazy guy to get an important bit of information. This is a movie about cars driving fast, plain and simple. 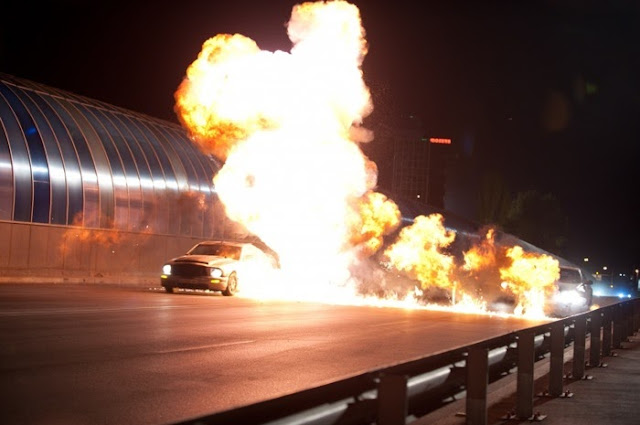 A vast majority of the movie takes place inside of a car. Brent and Gomez blast around urban Bulgaria—though Gomez seems legitimately surprised that people speak anything but English—and Voight calls them, giving them directions and tasks to complete. He orders them to drive through crowded public parks (Brent barrels his badass Shelby Snake through no less than three parks throughout the course of the film), with the instructions to crash into everything he can. Here lies the biggest hang up with “Getaway.” I don’t want to ruin anything for you should you decide to see this film, but the villain has zero motivation, absolutely none. You expect there to be some actual reason that he’s fucking with Brent, but there is not. He really is an empty threat. There are shots of his mouth and shots of his eyes—also, he appears to be doing all of his dastardly deeds in the middle of an all-night Christmas party—but you never see his entire face. Director Courtney Solomon attempts to have this pay off, but the shitty twist ending is exactly that, a shitty twist ending.

Voight keeps tabs on his playthings via a number of wireless cameras he installed on the car, which Solomon uses to weird effect. On one hand, this gives parts of the movie, especially early chase scenes, an unfortunate found footage feel. The action can be shaky and jarring. Luckily, this attempt at stylization falls by the wayside in short order, but even when it is employed, it doesn’t bother me as much as this kind of visual stunt usually does. Once, near the end, this even pays off in a big way, during what turns into a sweet chase filmed from the point of view of Brent’s Cobra. In a single, continuous shot, the stunt men—illegally mind you—tear through the early morning Bulgarian streets, on the very brink of disaster. Solomon puts you right there, inches away from chaos, going balls out at 90 miles an hour. You’re not going to find a more exciting single shot anywhere. It’s phenomenal, and alone is almost the ticket price (as long as you see a matinee).

The best part of “Getaway,” and the one real reason to see the damn thin, is obviously the chase scenes. That’s what you’re there for, and that’s what you get. The film subscribes to the first rule of suspense writing as laid out by Brian Garfield (the author of the book “Death Wish” is based on): “start with action; explain it later.” From the opening sequence, where the entire plot is laid out bare in front of you, “Getaway” almost never stops. When it does, and Hawke and Gomez are forced to talk in more than a sentence at a time, the film takes a precipitous downward turn. But these moments are few and far between, and mercifully brief when they do pop up, so you can get back to them wrecking car after car after car—they totaled 130 in all. Every few seconds an automobile rolls or flips or jumps something or takes a flight of stairs. The effects are all practical, and you get a visceral thump as motorcycles plow into walls and cars pummel each other on the streets. “Getaway” is like the anti-“Fast and the Furious.”

“Getaway” has everything you want out of a movie like this: a handsome hero with a clenched jaw, a nice looking sidekick, fast cars out the ass, and one ticking clock after another. You’re not going to see award-worthy performances, or be wowed by an intricate plot—I can’t stress enough how little story you’ll actually find here—but if you have an appreciation for specific niche action reminiscent of a bygone era, or just want to see cars drive real fast and crash into each other, this is a movie you may enjoy.
Posted by Brent McKnight at 7:58 PM