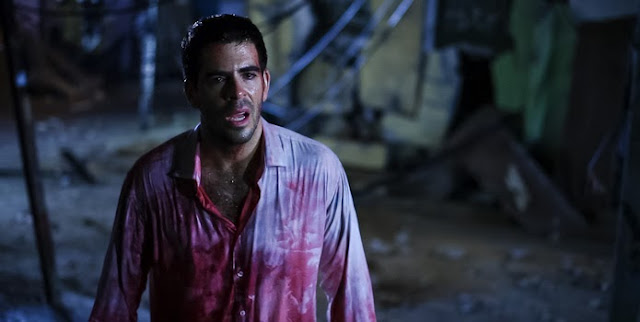 To lay this out right off the bat, I’ve never been a big fan of anything Eli Roth has ever done. There are two exceptions, he’s great in “Inglorious Basterds,” and that fake trailer he made for “Grindhouse” is pretty fantastic. Aside from that, the “Hostel” films don’t do anything for me, and I even found “Cabin Fever” underwhelming. I want to like his movies—sometimes I feel like it makes me a bad horror fan that I don’t—and I appreciate how excited and enthusiastic he always comes across about the genre, but it simply hasn’t clicked. I keep trying, but failing to make that connection.

One of my biggest issues is always that I hate every last character. I get what he’s going for, setting awful people up to be killed later on—that’s a tried-and-true staple of horror, after all—but there has to be someone to root for, someone you don’t want to be eviscerated in a horrific manner. Roth’s latest offering, “Aftershock,” which he co-wrote, produced, and stars in for Chilean director Nicolas Lopez (the “Fuck My…” trilogy), suffers from this very condition.

“Aftershock” is full to overflowing with terrible people being terrible. All that American tourist Gringo (Roth), and his local compatriots Pollo (Nicolas Martinez) and Ariel (Ariel Levy), do is drink, party, and scam on girls. When they meet a trio of ladies—Monica (Andrea Osvart), Irena (Natasha Yarovenko), and Kylie (Lorena Izzo)—the first 35 minutes (34 and a half, actually) of the movie is just assholes people being dicks, acting petty, and generally making the most obnoxious choice at every opportunity. For instance, Pollo is the son of a wealthy businessman, and uses his power, money, and influence to get wasted, get laid, and bribe his way to the front of every line. You know that’s going to backfire. 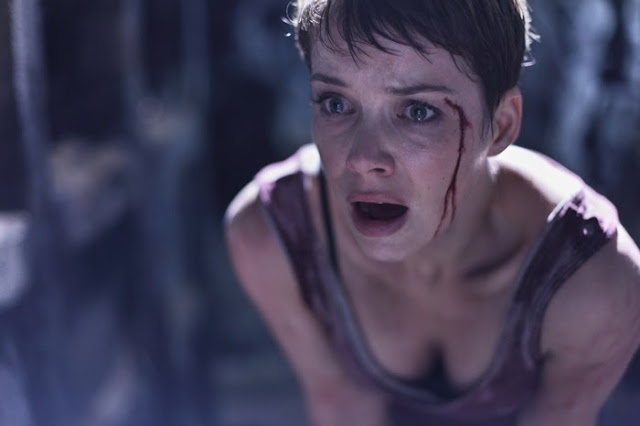 At the 35-minute mark, things take the only upswing of the entire movie, when, mid party, a devastating earthquake hits. This begins 15 or 20 minutes when you think there is hope for “Aftershock” after all. Things take a definite turn for the ridiculous, but at least you’re entertained. Ariel loses a hand trying to save someone from the wreckage of a nightclub. The severed appendage is then kicked around in crowd’s frantic attempt to escape, picked up by his companions—that’s real friendship right there—and stuffed into a purse. Said purse is subsequently stolen. The movie takes a turn into this sort of escalating absurdity, which is, admittedly, a lot of fun. Not only was there and earthquake, then there is an impending tsunami. And because that isn’t enough, a prison collapses, and all of the ultraviolent convicts escape to wreak even more havoc.

At this point, “Aftershock” has become a giddy example of a b-disaster survival movie. Then, unfortunately, it gets damn near unwatchable. Some disasters bring out the best in people, like first responders running towards a horrific disaster, but this is not one of them. Following the earlier espoused logic of escalation, the movie becomes a montage of “what’s the worst thing we can do to our characters?” Let’s impale someone, light a man on fire, and gang rape every woman we see in a cemetery. “Aftershock” gets so rapey that there’s even a rape twist. By the time you get here, the film has essentially abandoned all pretense at narrative or story, and is content to pick off each and every character one by one. Oh hey, lets put the character who, as it came up in random conversation, had an abortion, in a catacomb full of dead babies. Really?

The whole thing is too bad, because “Aftershock” isn’t a bad premise, and the fact that it exists at all is impressive. You don’t see a lot of independent, shot-on-the-cheap disaster films. Unless you have a Roland Emmerich, blow-up-the-White-House budget, there aren’t many people willing to take that chance, but Roth and Lopez were. You can tell that they were on a budget at times, but they were smart about how they went about it. Most of the story is set in fairly constrained locations, ones that you can easily muss up to get the appearance of the aftermath of an earthquake. They filmed digitally with a Canon SLR camera, the 5D Mark II, and with such a small rig they were able to film real parties with the ambient light, as well as use what is basically a fancy remote control helicopter to get sweeping shots that normally require an actual chopper. You have to give them credit for the way it was filmed, and for having the balls to tackle something this big with a tiny budget, which just makes how terrible “Aftershock” is that much more of a disappointment. 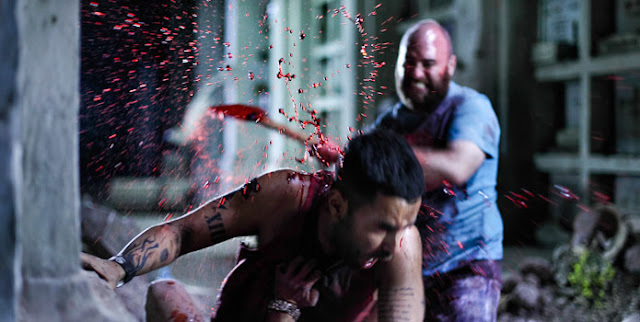 In something of a twist, the extras on the Blu-ray and DVD are actually a good time. “Aftershock” is so much better, so much more enjoyable when you watch it with commentary track. It’s just Roth and Lopez, on in LA, one in Chile, shooting the shit while they watch their movie. They’re good friends that enjoy each other’s company, a fact that comes through in the stories from set and production. The most interesting bits, however, are the stories about how they made a movie that looks like it has a budget, only without one. It’s especially worth a listen if you’re interested in adding some production value to your low-budget movie. There is also an extended discussion of stand-in asses, and you learn that they took inspiration for “Aftershock” Woody Allen. You don’t really see any of that come out in the actual film, but what the hell, right?

Rounding out the bonus material is a pair of behind the scenes features. A nine-minute making-of feature is pretty standard stuff, but not so bad. You learn that the entire cast is more or less friends and people who have been in every other movie Lopez, who usually makes romantic comedies, has done. For the next feature, they producers decided to pull a prank. Chile is one of the most seismically active countries in the world—hence the subject matter—so the casting department set up a dressing room, told auditioning actors they needed to change, and simulated a massive quake. You feel a little mean laughing at terrified actors in their underwear crossing themselves as the world falls to pieces around them, but it’s still funny. The stunt literally sends multiple actors sprinting for the parking lot in their tighty-whities. While you don’t need to track down a copy of “Aftershock” on disc, if you happen to find yourself in possession of one, do yourself a favor, skip the actual movie, and go straight for the extras.

Posted by Brent McKnight at 8:35 PM