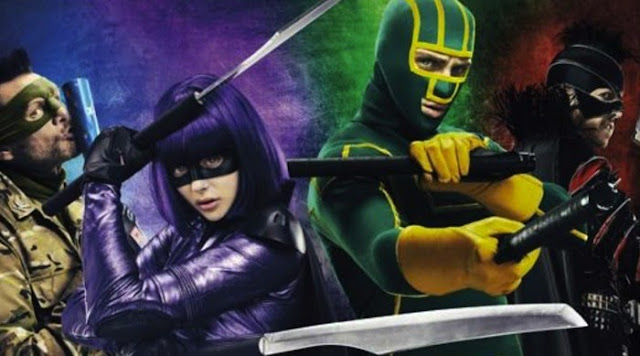 It’s weird, as I walked out of the theater, I was aware that there are big problems with “Kick-Ass 2,” but on the whole, I had been reasonably entertained over the previous 103 minutes. With some movies, distance smooths over the rough patches, and the more you think about them, the more you examine them, the more you enjoy them. “Kick-Ass 2,” however, is not one of those movies. There was a long bus ride home after the screening, and the more I thought about it, the more I broke the film down in my mind, the more glaring, and troubling, the flaws became.

On the surface, without considering anything deeper than eye candy, “Kick-Ass 2” is fun enough, though scattered and empty. But as it goes on, the movie falls apart. The pieces don’t fit together well, it fails to bring the same hyper-violent satire of the first film, and you’re left with a sub-par rehash. It’s entertaining, and there are hammy, over-the-top moments, but there’s a sensation that you’re watching a Day-Glo “Death Wish.” In fact, an early scene where Dave/Kick-Ass (Aaron Taylor-Johnson) goes trolling to be mugged, is lifted straight out of that film. The first film treads that fine line between myth and reality, but this time out, the effort is clumsy as the villain tweets about everything he does, and wants to be caught on camera in order to go viral. The movie wants to have something to say about such hyper-aware culture, and violence, but doesn’t.

The story picks up in the aftermath of the first film. In the wake of Kick-Ass’s success, a whole slew of costumed heroes patrol the streets, and everyone who has ever been mugged, bullied, or pushed around, has donned a mask. But poor Dave is bored as hell. Having hung up his skintight outfit, he simply sits on the couch with his old man, watching TV and going stir-crazy. There’s mild try at having some family conflict, but after one shot they shrug and give up. The other leftover from the first film, Mindy Macready (Chloe Grace Moretz) is still training as Hit-Girl, but has embarked on a harrowing new adventure, high school. Attempting to navigate the politics of being a teenage girl proves just as treacherous as entering a crack den armed only with a penknife. On the other side of the coin, Chris D’Amico (Christopher Mintz-Plasse), formerly the Red Mist, is consumed by a thirst for vengeance against the vigilante who exploded his father with a rocket launcher. Eventually Dave climbs back into his suit, and joins up with a team of superheroes named Justice Forever. Chris realizes that he, as the son of a dead gangster, is destined to be a super villain, The Motherfucker. His super power is that he’s “rich as shit,” and bankrolls his own gang of dastardly evildoers. It’s an obvious, easy, inevitable collision, while Mindy floats aimlessly around.

Mindy’s story is generally the most compelling angle of “Kick-Ass 2.” She tries to balance the promise she made to Big Daddy, to never stop defending the city, while navigating the pressures of growing up, and dealing with creepily sexualized classmates. Her struggle is primarily with self-identity: is she the costumed vigilante with a potty-mouth and tons of killer moves, or is she a young woman trying to figure out who she really is? Which is the real costume? Dave is just bored and looking for some action; and Chris is so spastic and single-minded that he’s impossible to take seriously. The problem with Mintz-Plasse is that he’s always going to look like a nerdy high school kid,. Though that’s what he’s supposed to be, you don’t buy him as an evil mastermind, and that’s even with him perpetrating a variety of heinous acts that people usually consider wicked. He’s a spoiled rich kid playing dress up.

Eventually, the film stoops to poop jokes that, while they may get a momentary laugh, are too dumb to do much. Even normally funny people like Clark Duke and Donald Faison fail, repeatedly, to deliver. Overall the movie makes a vain attempt to stay true to the elements that made the first one so much fun, but there are moments that leave a weird, lingering taste in your cinematic mouth. A lot of the film comes across as mean-spirited and hateful. You get what they’re trying to do, every racist, homophobic, misogynist remark is supposed to serve as an indicator that the villains are, in fact, bad people, despite a cartoonish veneer. Which they are, you get that from brutal murders. It seems strange to say that, in a movie where a mugger gets his hand lopped off by a little girl, and where a Russian in a bikini takes out half of a police force, a few spoken words can make you so uncomfortable.

And “Kick-Ass 2” is a movie that desperately wants to make you squirm. The tone bounces from fun and dressing up in cool outfits to dark, grim, and violent at the drop of a hat. This was part of the joy of the first movie, how it makes you complicit in the act. It creates a desire inside you to see this violence, you’re almost giddy with anticipation, but when the deed finally goes down, it’s such a visceral act that it gives you pause and you question whether or not you like this or not. This is the same arc travelled by our gang of makeshift superheroes. When Justice Forever embarks on their first mission, to take out a nefarious human trafficker, everyone is pumped, but when Jim Carey’s Captain Stars and Stripes pulls a gun, reality sets in, this isn’t a game, and people may really get hurt and die. Like with everything else, “Kick-Ass 2” is a flat, dull recreation of elements that worked once. You can’t relive that glory. One of the best scenes in the first movie is when a heavily armed Hit-Girl blasts her way through countless faceless bad guys. You might notice in “Kick-Ass 2,” that guns are almost entirely absent, and when they do show up, they are either empty and impotent, or quickly discarded in favor of a slick arm bar.

“Kick-Ass 2” also falls into a that all too familiar trap in superhero lore of having female characters that only exist as sex objects, and to endure a trauma—invariably sexual in nature—in order to fuel the hero’s righteous anger. The “woman in the fridge,” if you will. Hit-Girl is a strong female personality, badass, capable, smart, a fully drawn character with emotions that allows her to examine her choices and situation. Night Bitch (Lindy Booth), the only other prominent female, is just there to hump the shit out of the main character in bathroom stalls, and to almost be raped—which is then turned into a joke—to make Kick-Ass even angrier. It’s cheap, manipulative, and, frankly, a lazy way to tell a story, relying on half-assed manufactured sentimentality in lieu of actually bothering to develop characters, relationships, or legitimate emotion.

The entire movie is a quick, cheap shadow of the first film. Mildly entertaining on a very superficial level, “Kick-Ass 2” is, at best, a bumpy, uneven ride. In trying to hit the same notes as its predecessor, and missing every one, you can’t help but walk away feeling disappointed and let down.

Posted by Brent McKnight at 8:43 PM