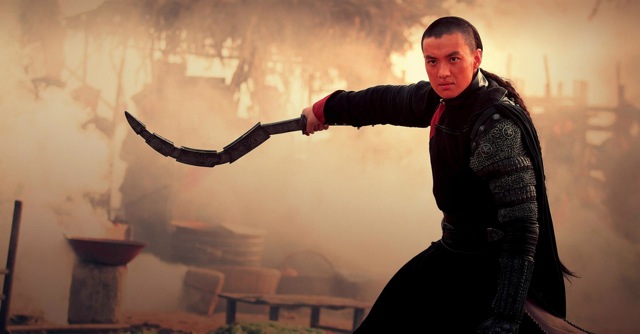 The Master of the Flying Guillotine (AKA One-Armed Boxer 2 and One-Armed Boxer Vs. The Flying Guillotine, which is how many of us first saw the film) is one of the most memorable movies in the Shaw Brothers cannon, which is saying something big, because they’re responsible for countless martial arts gems. Legendary Hong Kong director Andy Lau (Internal Affairs) recently took a whack at reworking the concept, as The Guillotines-now available on Blu-ray from Well Go USA-with mixed results.

Lau’s reimagining takes the original framework and interprets the subject in a grittier, more realistic fashion, giving the inherent violence a more visceral feel. In doing so, he negates all of the fun of the source. The title comes from deadly weapon that, in the original, looks like a goofy hood that is thrown over an enemy’s dome, and used to behead the target. It’s silly, but badass in an over the top, low-budget martial arts kind of way. In Lau’s update, the titular weapon gets a CGI makeover that’s already starting to look dated, and while it serves the same purpose, it is supposed to be much more sinister. But it’s almost never seen outside of the first scene.

The secret gang of royal assassins takes its name from their signature weapon, which they almost never use. Cut off the opening battle, remove the word guillotine from the script, and most of you would never make a connection between this film and its precursor. Once the crew was the favored method of dealing with all that oppose him, the emperor’s fancy has been caught by more modern, Western, gunpowder-based armaments, like guns and cannons. After all, a guillotine can kill any man within ten paces, but a rifle can reach much further than that. And new toys are shiny and fun. 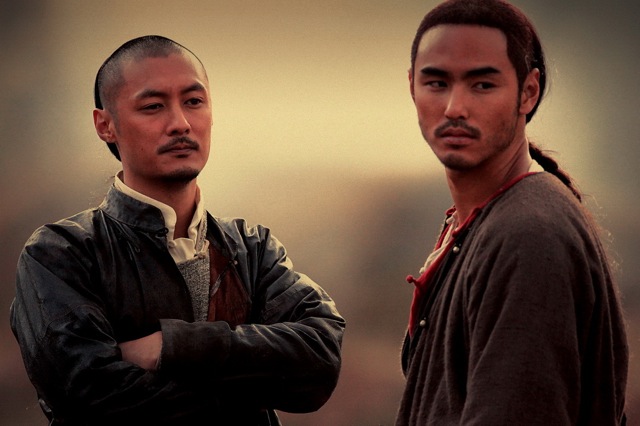 This is the central conflict in The Guillotines, tradition versus progress, and clinging to your conventional ways of life in the face of crushing, inevitable progress. Leng (Ethan Juan), the leader, and the rest of the team, have never failed in more than 300 missions, but the guy on the throne has other ideas. When a prisoner named Wolf (Xioming Huang) escapes from their custody, it spells the beginning of the end for the guys. While the prince represents impending change, new ways of thinking, Wolf is on the opposite end of this spectrum. Vilified as a terrorist by the powers that be in the Manchurian-ruled Qing Dynasty, he is a folk hero to the Han Chinese, working with victims of a smallpox outbreak, protecting his people, and fighting to protect a passing way of life.

Leng finds himself in the middle of this conflict. With a sworn loyalty to his metaphorical brother the prince, more immediately symbolized by his other faux-brother Haidu (Shawn Yue), everything he’s ever known or worked for goes right out the window. But he clings to this even as Wolf shows him the truth of the situation. This is where The Guillotines lays it on way too thick. As Wolf reveals reality to Leng, as Leng grapples with the betrayal of his brothers, things veer from sweeping historical epic, into full on melodrama. There are so many man tears, and the point the Wolf is a Christ-like figure blares like trumpets in every scene.

Themes of duplicity and allegiance occur throughout, and the focus primarily rests on the embodiment and reality of these ideas. For what is set up at the beginning as an action film, there is a shocking amount of time spent watching tears well up in men’s eyes. Despite brooding performances across the board, The Guillotines never delivers on the promise of its premise. This is an action movie with very little action, a period piece with very little history, and the story of brothers and betrayal with very little earnest emotion. The whole thing plays out much more like a western than wuxia, and the stories never translate. Though the film looks fantastic, with each thematic setting getting its own color scheme, and Chan Kwong Wing’s string score is positively haunting, The Guillotines is scattered under its shiny exterior.

Everything comes together in a nice looking package—the Blu-ray transfer is a fantastic delivery system for Lau’s cinematography and shot composition—but there’s not a ton in the way of bonus features. There’s a making-of featurette that, while it’s not bad, isn’t anything that you haven’t seen before. You get the usual behind-the-scenes information and cast and crew talking in glowing terms about the film. There are extensive interviews with all the key players, including Lau, costume designer Dora Ng, and actors Huang Xioming, Ethan Juan, Shawn Yue, Boran Jing, and Li Yuchan.

Posted by Brent McKnight at 6:59 PM