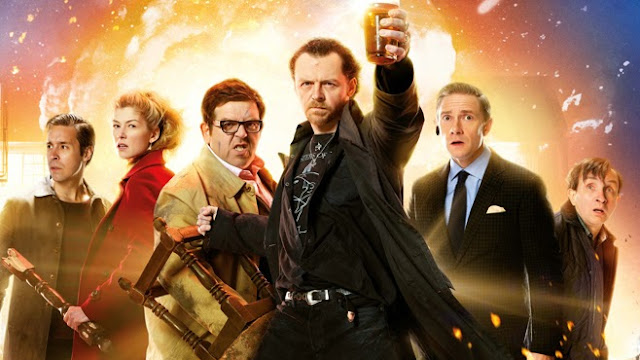 Everyone has that friend that’s not always easy to get along with, that you don’t see for extended periods, and when you do, you spend most of your time questioning why you still put up with this person. In Edgar Wright’s new film, The World’s End—the close of the so-called Cornetto Trilogy that began with Shaun of the Dead and Hot Fuzz—that role is filled by Gary King (Wright’s frequent co-conspirator Simon Pegg). He’s loud and crass, he’s ingested every drug you can name, along with a few you can’t, but most of all he’s stuck in the past, fixated on one glorious night in 1990.

Gary has never moved beyond the time that he and his four best mates—Andy (Nick Frost), Oliver (Martin Freeman), Steven (PaddyConsidine), and Peter (Eddie Marsan)—tried and failed to complete their epic hometown pub-crawl. Known as the “Golden Mile,” the gargantuan task includes knocking a few back at each of the town of Newton Haven’s twelve pubs, culminating in a pint at the World’s End. Fixates as he is, Gary, always the manipulator—this is also always the friend that you just can’t say no to—gets the metaphorical band back together for one last shot at glory.

This all sounds well and good, right. Five friends reuniting is certainly fertile narrative ground, but that’s not enough for Wright, Pegg, and company. Like it’s predecessors, The World’s End picks a genre to riff on. Shaun played with zombie movies, Hot Fuzz used every action trope in the book, and this time around, science fiction bears the brunt. Upon returning to their small town roots—a place so boring it boasts about having the first roundabout in all of England—the crew notices that things are a little strange, and it isn’t just that they have changed over the years. As it turns out the town has been taken over by blue-blooded alien robots. 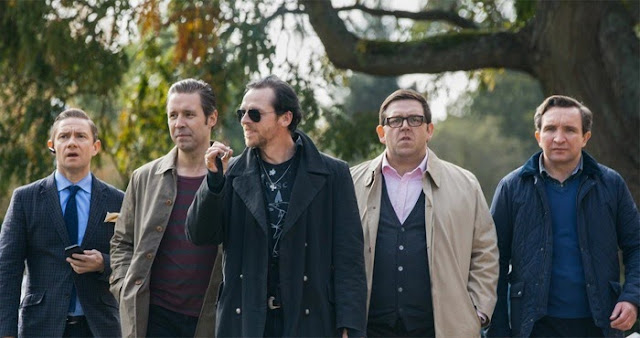 The World’s End follows similar thematic and structural paths as the other films in the trilogy. While it is definitely intended in a satirical spoof on the genre on one level, we’re also talking about a fully functional sci-fi story. You have elements of body snatching, invasions, and more than a few overt nods to John Carpenter’s classic They Live in the way the visitors integrate and take over. It’s mocking in a loving way that is totally endearing. They’re not making fun, the filmmakers are celebrating all the quirks and idiosyncrasies they love in the genre. This is definitely a laughing-with kind of scenario.

And for a movie that is ostensibly a comedy, The World’s End carries a surprising amount of emotional weight, another hallmark of the Wright/Penn tag team. Gary is funny, but also sad since he has been stuck in an endless loop of trying to relive one moment for years. As he experienced it, he thought, this is the best night of my life, and he was right. When Sam (Rosamund Pike) asks what happened to him, he replies, in every sense, “Nothing.” You immediately wonder what, after 20 years, led Gary to attempt this recreation. The script peels back the layers as the story progresses. The five guys know what happened between them, know why they’ve drifted apart, and it isn’t the kind of thing you blurt out after not seeing someone for years. Suckered again by Gary’s charisma, they play nice as long as they can, with bits and glimpses of their history shining through. Gradual reveals over time keep you on the hook and invested in the characters.

It doesn’t hurt that the cast is great and all working at the top of their game here. Pegg’s manic ringleader is a blast; Considine’s Steven is, in his own way, stuck in the past; and Freeman’s uptight real estate broker is spot on. Peter has a nice emotional arc, and though it is subdued and largely in the background, Marsen uses what little space he has to deliver a poignant emotional jab. It’s Frost, however, that does the heavy lifting. We’re used to seeing him as broad, cartoonish buffoons—that’s what Andy was at one point, though he’s grown up—but Frost is the straight man here, the foil for Pegg’s madness, and it works. Gary and Andy were like brothers, it’s his wounds that are the deepest, and he’s also Gary’s best shot at redemption.

Amidst all this seriousness, and a story that veers deep and often into darkness, The World’s End also takes some time to be hilarious, full of Wright and Pegg’s quick wit and sharp dialogue. There’s moment that plays like drunken “Who’s On First,” where I almost lost it completely. After the gang discovers the aliens, halfway through the Mile, their reason for continuing is specious at best, but that’s a small complaint.

Like the third movie in any good trilogy, there’s and air of finality, of closure as the film delivers everything you expect and need. Raucous, crude, and funny, it’s also touching and crushes genre boundaries with a deft touch. Great as a standalone, or as the exclamation point at the end of the series, The World’s End is inventive, strange, and wonderful.