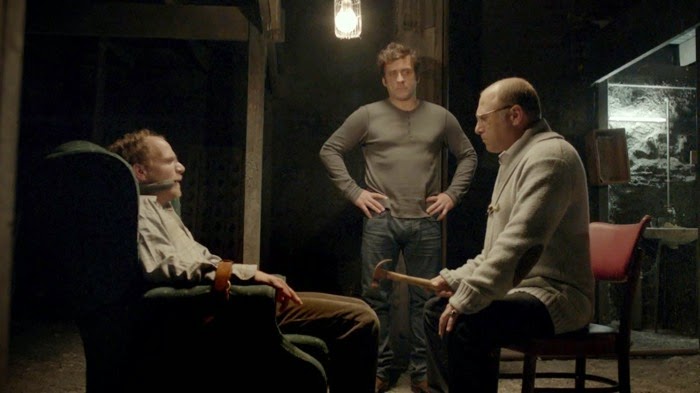 When a trio of young children play what appears to be an innocent game of hide and seek, the dreamy slow motion and throbbing score inform you that there is something much darker on the hunt. So begins Big Bad Wolves, the now-on-Blu-ray thriller from directing duo Aharon Keshales  Navot Papushado—the pair behind 2010’s Rabies, the first horror movie to come out of Israel. Tense, twisted, and, oddly enough, startlingly funny in a way that occasionally calls to mind early Coen Brothers films, Big Bad Wolves grabs you from the opening and drags you, often kicking and screaming, along for the ride.

This first scene results in the horrific kidnapping and murder of a young girl, and this tragic even throws three men together in a brutal collision. You have Micki, (Lior Ashkenazi), the cop on the case who works outside the restrictive bounds of the law; Gidi (Tzahi Grad), the father of the dead girl; and Dror (Rotem Keinan), the suspected killer. Before long, Dror is strapped to a chair in the basement of a secluded house, as the others work him over, searching for answers about Gidi’s daughter’s missing head. No one should have to bury their child without a head. The whole film plays like the reverse of a fairy tale, designed to terrify parents instead of their children.

While this could have easily descended into another torture movie, and there are definitely tropes from that genre, but Keshales and Papushado’s script keep it fresh. Perhaps it is the cultural stance that provides a unique point of view, but they keep Big Bad Wolves full of wicked surprises, thick, moody atmosphere, and creates an interesting dynamic between the three leads, and takes an exploitation revenge framework and classes up the joint.

Each of the actors brings an astonishing rainbow of grays to their performances, with each providing their own perspective. Gidi is the driven father, searching for answers that he thinks will bring him peace, who also takes the time to references chaos theory. Micki, who resembles a more macho Steve Carell, is the source of most of the humor, and though he’s not above kidnapping and torturing a suspect, he remains likable throughout. Dror is harder to crack, which is the point. You never know why everyone suspects him of this heinous crime, after all he’s a bible teacher who has never been in trouble for crying out loud. Still, there is unnerving and off about him, and you fluctuate back and forth on whether you believe his claims of innocence, whether you despise him or empathize with him. In something of a notable feat, the film keeps you guessing about his true nature until the very last moment.

Layered Hitchcockian strings and nasty dark twists and turns create a moody, suspense filled landscape. The directors snake the camera through the tight confines of the basement and play with depth of field in the wide exteriors to toy with your moods. But despite how heavy the subject matter is—we’re talking pedophilia, murder, and particularly mean spirited uses for a blowtorch—Big Bad Wolves is never so oppressively bleak that you lose all hope that someone, somewhere, eventually, might do the right thing, or at least something that isn’t completely terrible. And the pitch-black sense of humor remains constant even in the darkest times. It has an uncomfortable gallows style, but a well-timed laugh offers you a brief breath that you need from time to time.

Unpredictable—in an earned way, not a crazy coincidences coming out of left field—pretty to look at, and energetic, Big Bad Wolves a unique, writhing beast that subverts your expectations and constantly changes how you see things.

The picture on this Blu is crisp and clear, and provides an fantastic delivery system for the photography, but the rest is just okay. You get a trailer, a three-minute look at the film from AXS TV—Mark Cuban owns both that network and Magnet, who distributed the film and released this disc—but the key piece is a 16-minute behind the scenes documentary. You get all the usual stuff you expect, like interviews with the cast and crew about the origins of the story, but the one thing that comes through is how much fun everyone had making this movie. Everyone involved has an impressive level of enthusiasm, and that zest is infectious.

Posted by Brent McKnight at 9:08 AM