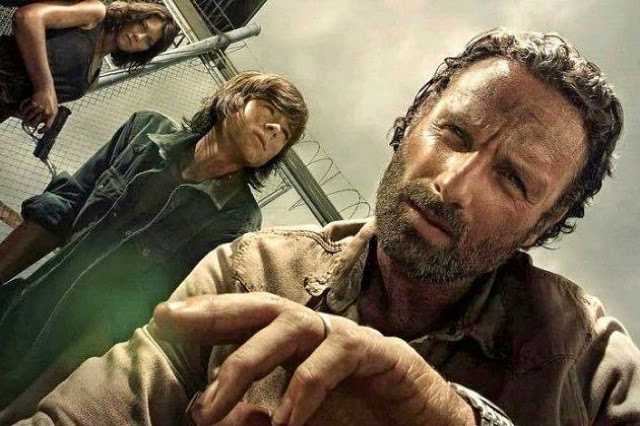 Now that AMC’s hit zombie drama The WalkingDead has shuffled off for another end-of-the-year hiatus full of casting updates and random fan speculation, we have some space to take a step back and examine the season that was. Going into season four, I was hopeful, despite the fact that, since nearly day one, I’ve had a troubled, at best, relationship with this show. Season three saw one of the best episodes of the series (“Clear”), and some of the absolute worst (“Arrow on the Doorpost,” among others). Plagued since the beginning by a lack of overall consistency, season three raised fluctuations in quality to a damn art form.

Here’s why, armed with a new showrunner, the third in the show’s short life, I still had hope. See, the new head, taking over after Glenn Mazzara was unceremoniously—and publicly—ousted, is Scott M. Gimple, who, as a writer, is responsible for the best and most memorable episodes of the entire run. And low and behold, my persistence paid off, and season four is indeed the most consistent in Walking Dead history. The season is definitely a tale of two halves, bisected as it was by their annual mid-season break, but even approaching it in this manner, there was almost nothing but forward progress.

Thematically, stylistically, and structurally, the first half of season four is very much a continuation of season three. You get the definite feeling that these episodes are the new regime dealing with old business, cleaning up the mess that was left to them. But even then, there is momentum despite dealing with preexisting conditions and issues.

The action picks up a few months after the end of season three. Andrea is still dead, the Governor (David Morrissey) is still out there, and people are bummed, but they’ve managed to turn the prison into something that resembles a home. Their numbers have grown as they took in refugees from Woodbury and come across other survivors. Rick (Andrew Lincoln) has pushed Carl (Chandler Riggs) into a more domestic role and now he’s a little farmer; Glenn (Steven Yeun) and Maggie (Lauren Cohan) are still doing it every chance they get; and Carol (Melissa McBride) has story time with the kids, which doubles as her clandestine lessons showing them how to use weapons to defend themselves. Michonne (Danai Gurira) still goes out on missions looking for the Governor, but he’s seemingly vanished into the wilderness.

Overall, things just sort of chug along at a nice, even pace. This sounds rather mediocre, and while it is definitely that, it is still better than what came before. There are some questionable story choices, a huge amount of tedious, soap opera style interpersonal relationship drama, and any new addition to the cast is little more than faceless zombie food. Still, from week to week, the episodes are the most even and consistent they’ve ever been. Even though the progress is relatively minor, there is still progress each week; you no longer feel like there are entire episodes that are just a waste. That alone is a significant improvement.

This isn’t to say there is no wasted time, there certainly is. The plague storyline that they introduce gets tedious very, very quickly, and you get the impression that the writers are filling time, though none of the episodes are nearly as empty as many from season three. Again, we’re talking about baby steps, but they are in fact steps forward. But the focus is more on the people instead of just the zombies and the crazy shit, and they’re taking pains to actually attempt to develop the characters and propel the narrative.

What comes next, however, represents The Walking Dead’s biggest stumble of season four. They just had to bring the Governor back. Fans of Robert Kirkman’s comics know just how great a villain this character could have been. The show never reproduced that, hemming and hawing as they did, always trying to humanize him, never fully deciding whether they wanted him to be good, but tormented, man, or a raging monster. That indecision is a large part of why season three sucks so incredibly bad.

And not only did the writers bring the Governor back, they gave him two consecutive weeks all to himself, picking up his adventures after the fall of Woodbury. In a story arc that attempts to recreate the events of Kirkman’s novel The Rise of the Governor—which all happens before Woodbury, not after—he encounters a family, takes up with them, falls in love, and immediately falls back into that wishy-washy, is he good/is he bad back and forth. You spent an entire season watching this, and it is beyond frustrating to be right back there again.

These are the first episodes that are truly, entirely squandered. You have no emotional investment, you don’t particularly care if he’s changed or not, and they’re difficult to make it through, especially the second. But unfortunately they’re necessary. Again, the first half of the season consists of the writing staff cleaning up the mess made before them. Awkward and misplaced as it may be, the Governor storyline does set up the violent clash at the prison that ends the first half of season four.

By the end of episode number eight, “Too Far Gone,” everything sucks. The Governor and his cronies have breached the prison walls, everything the survivors have worked to build lies in smoldering ruins, and in order to survive, the crew is forced to abandon their sanctuary and scatter in a dozen different ways. They’re beaten, bloody, broken, unsure if their friends and family are alive, and in some cases, knowing they’re very, very dead.

This is where the second half of the season picks up, and this is also where Gimple and his writing team come into their own, putting their stamp on the series. And the result is not only a superior part of the season, but the best version of the show. From episode eight to episode 16 what you have is The Walking Dead as good as it has ever been. For the first time in its four-year history, the show is starting to live up to its considerable potential.

The best episode of season three, by far, is “Clear”—written by Gimple himself. A smaller, more contained story, the episode only involves Rick, Carl, and Michonne, and a familiar face from Rick’s past. It doesn’t feel the need to check in with every single cast member, and really shows how good, how emotional, and how compelling The Walking Dead can be.

With the group of survivors fractured as they are after the prison, the writers use this opportunity to take a similar approach. While you often check in with multiple splinters of the group, you spend extended periods with each segment, and even then, you usually only see a couple of the separate pieces, not every single one every week. In “Still,” for example, there are literally two people, Daryl (Norman Reedus) and Beth (Emily Kinney), and it is not only one of the best episodes of the season, but one of the best of the series. Two characters talking, limited action, and it is a fantastic episode of TV.

This strategy, which very clearly has Gimple’s fingerprints all over it, allows for more character development than you’ve ever seen before on The Walking Dead. Michonne is a prime example. Since her introduction at the beginning of season three—or the very tail end of season two if you prefer—she’s been a functional mute, to the point where she could easily diffuse deadly conflict if only she’d uttered a handful of syllables, but she still says nothing. She had zero personality aside from a scowl and a sword. Over the course of a few episodes, she becomes more of an actual character, less a type, than she ever has been before. When she stumbles across Rick and Carl at the end of “After,” the first episode back, and breaks down in tears, it is the most earnest, emotional, and real that you’ve ever seen her, and over time you witness her develop a legitimate, earned bond with the younger Grimes.

This goes for every one of the survivors. The Maggie/Sasha/Bob Stookey branch is by far the most limited and stunted and one note, but still more complex and rewarding than most of The Walking Dead. The show takes its sweet time bringing the group back together, and is much, much stronger because of this choice. Worn down, on the verge of giving up as they are, the characters go through absolute hell—especially Tyreese (Chad Coleman) and Carol in “The Grove.” You’re right there with them as they plumb the depths of their souls, and as a result you learn so much more about them than you ever expected to.

Far from perfect, this is still easily represents the high point of The Walking Dead. The show introduces a trio of characters from the comics—Abraham (Michael Cudlitz), Rosita (Christian Serratos), and Eugene (Josh McDermitt)—but never has much use for them. Readers of Kirkman’s books know what a major role they’ll play in the future, but at the moment in the series, they’re just kind of there. While the season finale, “A,” starts strong, it peters out into bland action at the end. Though it does leave the key players in one hell of a predicament, it was the weak link in this portion of the season.

Like I said, season four of The Walking Dead is a tale of two halves, something that Gimple acknowledged on the season finale of Talking Dead, AMC’s live post-zombie talk show hosted by Nerdist’s Chris Hardwick. He acknowledges the necessity of reinvention, the need for the show to continually change and grow, and for the first time in four seasons, you feel like this is happening.
Posted by Brent McKnight at 1:51 PM