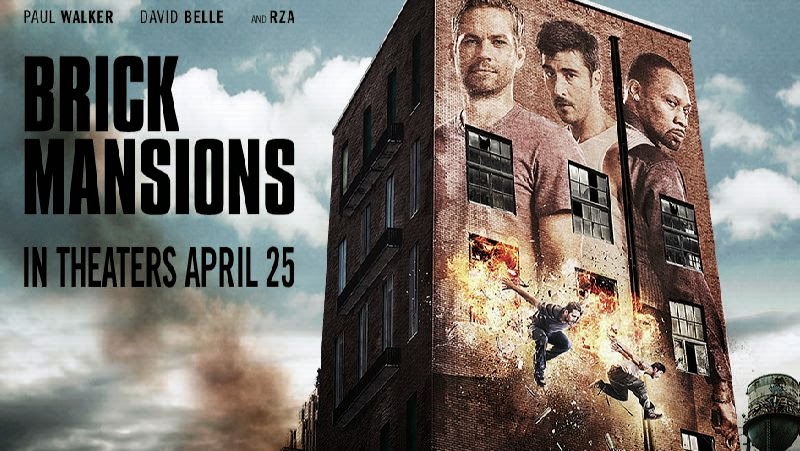 If you’ve seen “District 13”—aka “District B13”—the 2004 actioner from writer/producer Luc Besson and directed by Pierre Morel, then you know exactly what to expect from the new American remake, “Brick Mansions.” Hell, if you’ve seen a trailer you know what you’re getting into. Like the original, Besson wrote the script for the new version, one of his protégés handled the directing duties—Camille Delamarre this time, who has served as an editor on many of Besson’s pictures—and even stars one of the same actors, David Belle, in the same role. And Besson’s fingerprints are on damn near every last frame.

“Brick Mansions” is also the last film from Paul Walker after his tragic death late last year. Sure, we’ll see some approximation of him in “Fast and Furious 7,” where CGI and his brothers serving as stand-ins will fill the gaps, but this is the final movie he finished during his too-short lifetime. And it really is a fitting send off, showing Walker doing what he did best. No one ever accused him of being a great thespian, but he rarely tried to be anything that he wasn’t. He was a handsome, charming, likeable dude, earnest as all hell, and he chose roles that accentuated those qualities, which is what allowed him to connect with fans and audiences. “Brick Mansions” fits perfectly into this mold. High-tempo, not particularly deep, the movie can also be a crap ton of fun if you let it.

For a movie where every element that is not directly related to the action is laughable, there is an overabundance of plot, though almost all of it totally superfluous. In a slightly futuristic Detroit—with a few exceptions, the story could take place next year—a section of the city known as Brick Mansions has become so run down, so infested with crime, that it has been walled off “Escape From New York” style, run by a dictatorial gangster named Tremaine (RZA). When the military loses a bomb, they send undercover cop extraordinaire, Damien (Walker), into what is essentially a warzone to retrieve and disarm the weapon. Because the residents are wary of outsiders, he needs eyes, and they enlist Lino (Belle), a convict with ties to the neighborhood and a penchant for backflips.

That’s all you need to know about the movie; that’s all that really matters, but there is an absurd tangle of asides and little threads that are intended to give the film depth and texture, but add nothing. It isn’t quite as out of control as Besson’s script for “3 Days to Kill”—there are no go-with-the-flow immigrant families squatting anyone’s homes here—but you bounce all over the place. Tremaine killed Damien’s father many years ago so there’s a revenge element, Lino has an estranged girlfriend that he helped work her way out of the hood but the hood never lets go, some unscrupulous land developers want do bulldoze the projects and build fancy new condos, and, perhaps most importantly of all, Damien really, really wants to get his grandfather to stop smoking. Because the health of your loved ones is important. It’s a little insane how much random crap they cram into one film. Somehow at 89 minutes, this still feels a few minutes too long. 79 might have been optimal.

Everything that isn’t action is so overly serious that it usually winds up being funny as hell, but luckily, like the original, “Brick Mansions” is basically a highlight reel for Belle, one of the originators of parkour. The movie overflows with running, jumping, climbing, people throwing themselves off of everything, and walking on walls. And all of it actual stunts, no computers, wires or tricks. When Walker is on screen the action takes on a more traditional stance, and his contribution in this arena lends itself more to shootouts and car chases rather than hurling himself off of buildings, though he does get in on the act from time to time.

“Brick Mansions” isn’t a good movie, but it is fun, and I that’s enough. It’s a bad movie that knows precisely what it is and what it needs to deliver in order to be successful, and it does just that. Unless you’re a diehard Walker fan and must see every one of his films in the theater, you probably don’t need to rush out to see this, you can just as easily wait for this to hit home video. Either way, this is best viewed in the company of easily accessible alcohol and a group of friends ready to get a little rowdy.

Posted by Brent McKnight at 5:56 PM