You’re at home one Friday or Saturday night, it’s late, you’re alone, aimlessly flipping through channels, thinking to yourself, “I should just get up and put in a movie.” But you know that you’re far too lazy for that and figure that if you search long enough, surely you’ll find something worth watching. Then, as if by divine intervention, you land on a random channel you’ve never heard of, maybe it’s your local cable access provider, and they’re playing an old black and white B-movie. There’s a dashing young man driving a car, a buxom young lady with a ditzy disposition in the passenger seat, and just when you’re about continue your search, zap, a flying saucer comes out of nowhere, and you’re hooked. We’re talking cheesy, campy, and you wish you had some buddies around to help you make fun of this, Mystery Science Theater 3000 style. You can see the string holding up the UFO, and you can’t believe how wooden the dialogue is, but at the same time, the movie is totally endearing, and you thoroughly enjoy your time spent together.

Most of us have found ourselves in this situation, or one very similar, at one time or another, and this sort of gleeful fun is exactly what It Came!, a new comic collection from Dan Boultwood, perfectly captures on its pages. Tongue planted firmly in cheek, the story, and the accompanying artwork, call to mind the heyday of schlock-filled, low-budget sci-fi cinema, with keen eye on the attempts of British filmmakers to mimic the work of their more successful Hollywood counterparts.

Framed as a faux long-lost movie, recently discovered—dated advertising interludes included—the plot of It Came! is as ridiculous and bonkers as you could ever hope for. Pompous scientific blowhard and buffoon Dr. Boy Brett, which is a perfect name for this kind of character, is out for a leisurely drive with his put upon office aide, Doris Knight, when holy crap what do the stumble across but a giant alien robot hell bent on destruction. Whatever will they do? Whoever will they call? The military doesn’t believe their otherworldly claims, and how will they ever stop the nefarious GRURK before the metal monster gets to London town and steals the stiff-upperlipedness that makes the British so…British? Well you’ll just have to pick up a copy to find out for yourself, because I’m not talking.

Though Boy’s repetitive schtick of referring to Doris as old bean, old chap, old desk, old chair, old whatever—a gag the book remains steadfastly devoted to throughout—wears out its welcome, and fast, It Came! is still a total blast from start to finish. The story does run a bit longer than is really, truly, 100 percent necessary. This, however, wouldn’t have been much of a problem, or even something that you notice, if you were picking this title up one issue at a time, but stapled together as they are in this bright and shiny package, you start to notice things getting a little samey in the middle regions of the narrative. It’s hard to keep a single joke, even a good one, going consistently for that much time. But that’s a relatively minor quibble, and even with that I managed to blow through this in a single sitting, which indicates a thorough level of engagement.

Clever, ridiculous, and most of all, really damn entertaining, this collection of It Came! is now available from Titan Comics, the same folks that brought you the equally fantastic Chronos Commandos: Dawn Patrol. I get the feeling that not nearly enough people are going to rush out and pick this up, and that’s too bad, because they’re missing out on a really good time. So if you’re looking for a fun, quick read that both pokes fun at, and honors, an earlier time in science fiction, you should definitely take a chance on It Came!, it’s well worth your time. 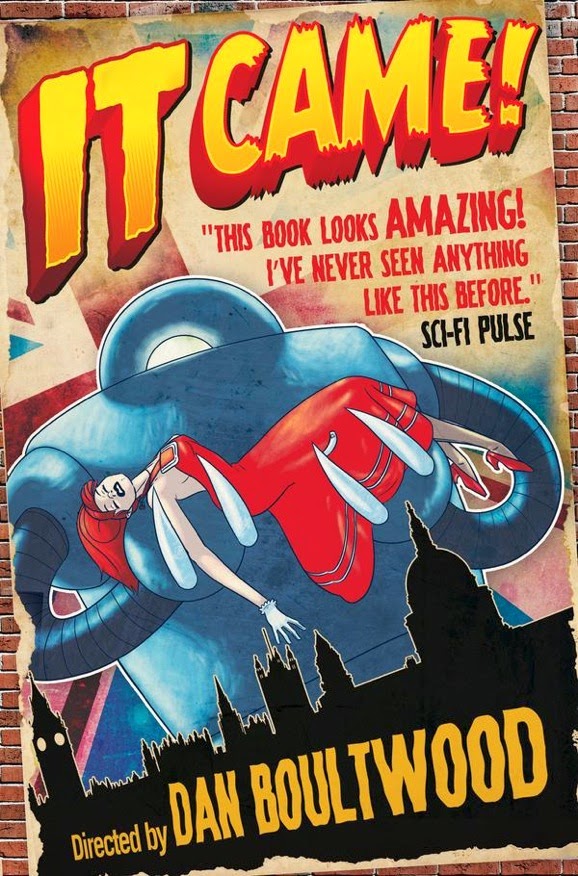