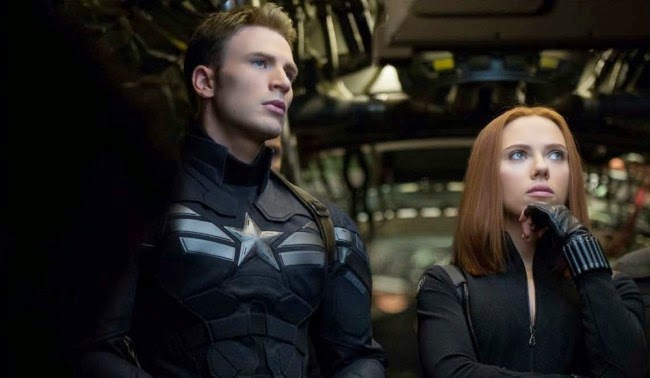 Captain America was never one of my favorite characters growing up. He always came across as Marvel’s version of Superman—a one note, flag-waving, rah-rah, wholesome good guy who sees the world in black and white. In other words, he was boring. (Before you start yelling at me, citing specific issues and storylines, I’m well aware that this is a gross oversimplification of both characters, but that’s a discussion for another time and place.) That’s why I was surprised how much I enjoyed 2011’s “Captain America: The First Avenger.”

So much of what followed in the Marvel Universe grew out of that film, that the latest addition, “Captain America: The Winter Soldier,” is more of a follow up to a bunch of different movies rather than your average straight up sequel. This is just as much a part of “The Avengers,” “Thor,” and “Iron Man,” as it is it’s own family. You can’t have the story here without the action in those movies, and in creating another piece of their elaborate puzzle, the studio has delivered one of the best movies they’ve ever produced, maybe the best.

“Winter Soldier” finds Cap (Chris Evans) still working for S.H.I.E.L.D., still cleaning up for Nick Fury (Samuel L. Jackson), and growing increasingly disillusioned with the director’s questionable interpretation of “truth” and penchant for doling out selected bits of necessary information. When S.H.I.E.L.D. is compromised, and a mysterious force called the Winter Soldier—a kind of ghost story that spooks and spies tell their kids at night—goes after the eye-patch-wearing head honcho, Cap and Black Widow (Scarlett Johansson) step outside the bounds of law to unravel an elaborate mystery. What they find goes right to the top of the twisted and treacherous political spider web, has deep roots going back decades, and delivers more than a few legitimately shocking reveals.

Like the events of “The First Avenger” continue to echo, so, too will the action in “Winter Soldier.” Without getting too specific and spoiling anything for you, at the end of the movie, the entire world they’ve set up has been indelibly altered in a way that there’s no coming back from, and it’s going to be interesting to see how they move forward. The characters have certainly changed and evolved, as you hope they are at the end of any narrative arc, but the consequences are so much wider, and have so much more scope than just the handful of people involved in this one film. You have to hand it to Marvel, they really shake things up with “Winter Soldier.”

“The First Avenger” has the most emotion and heart of any of the Marvel movies, and “Winter Soldier” ups that ante. Steve Rodgers is trying to figure out where he fits into this world that he doesn’t recognize. He carries a To Do list with him where he keeps track of cultural events that he needs to familiarize himself with, like “Star Wars,” “Star Trek,” and many others. Early in the movie there is a heart-breaking scene between him and an age-ravaged Agent Carter (Haley Atwell) that is absolutely gut wrenching. This is the one connection he has to his old life, to a time when he knew who he was, when his earnest devotion to duty meant something simple, and it crumbles as he reaches out to touch it.

The film sets him up as a soldier returning from war, trying to make those huge adjustments, something that there wasn’t time for in “The Avengers.” This is how he first bonds with Sam Wilson (Anthony Mackie), who eventually becomes the Falcon. A former soldier himself, now working to help returning vets re-acclimate to life at home, Sam is a perfect sounding board for Steve. He helps him realize that he’s not alone, and learn that his feelings, even though he’s 95 years old, aren’t as unusual as he thinks.

It’s this internal battle where he tries to find trust and intimacy and a sense of normalcy that connect you to “Winter Soldier.” Cap may be a genetically enhanced superhero, but this is a very human struggle. In the midst of this, Evans and Johansson develop a fantastic onscreen chemistry. If ever you have to worry about trusting someone, it’s got to be an international super spy, but they move along naturally. And thank whatever higher power you may or may not believe in that the script from Christopher Markus and Stephen McFeely refrains from forcing a romantic connection between the two. They can create a wonderful relationship without having to devolve into melodrama and cheap movie clichés. Cap and Black Widow hooking up would be awkward, out of place, and entirely unnecessary to the film. In fact, it would be so strange—this earnest good guy and the jaded secret agent who has done horrific things—that such a coupling would damage the movie irreparably.

At its core, “Captain America: The Winter Soldier” is deeply personal journey that just so happens to be full of cool cloak and dagger spy stuff. An engrossing mystery, there’s also all of the fun and huge action spectacles that you expect out of a Marvel movie, but the film works on a much smaller, more intimate level as well. There’s a ton of nerdy Easter eggs for fans that indicate things the studio may have on tap in the future. I don’t know that I would call it perfect, that’s a big word to use when describing a movie, but “Winter Soldier” is fantastic—superhero film or otherwise—and stands near the top of the heap of Marvel’s considerable cinematic mountain.

Posted by Brent McKnight at 4:38 PM