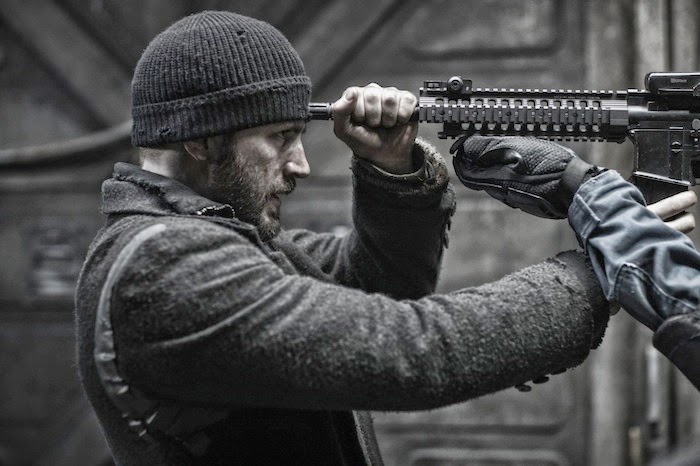 For fans of international cinema, the news that South Korean director Bong Joon-ho is making a new movie is enough to start you salivating. All he’s done over the last ten plus years is turn out hit after hit, like Memories of Murder, Mother, and The Host—the good one with monsters, not the crappy one by the lady who wrote Twilight. The news only got better from there. This film was going to be his English-language debut—as much as the presence of subtitles don’t sway me one little bit, I do sometimes feel like I miss details. Then we found out this was going to be a post-apocalyptic story, another plus, and he together an incredible cast of actors from around the globe.

The resulting film, Snowpiercer, finished production long enough ago that I listed it among my most anticipated movies of 2013. Considering the current date, you can imagine how that went. Though the film opened around the world—including breaking box office records in Bong’s native South Korea and gathering rave reviews—there was a protracted delay while the director and The Weinstein Company, who own the domestic distribution rights, argued about significant cuts to the film. The two sides finally reached an accord to release the unedited version, though in a much more limited run, the wait was worth every last second.

Set in a world where attempts to reverse global warming kicked off a new ice age, the last remnants of humanity live in a train, powered by a perpetual motion engine, endlessly circling the frozen wastes for 18 years. Inside, a rigid caste system has developed among the survivors, keeping everyone, often violently, in their place, like a condensed Orwellian nightmare. Near the front, the passengers live in spacious luxury, with enough to eat, access to education for their children, entertainment, amenities, and, gasp, windows through which they can see the outside world, encased in ice, like the surface of an alien planet.

At the tail of the train, things are drastically different. Piled on top of one another, wallowing in their own filth, awash in a drug called Kronole made from industrial waste, and subsisting on protein bars you’d rather not read the ingredients of, theirs is a bleak, hopeless existence. Resentment boils and bubbles, and from time to time has exploded in open rebellion. This is one of those times. Snowpiercer begins on the eve of one such uprising, led by Curtis (Chris Evans), and the rest of the film follows the rebels a they move forward through the train. These discrepancies make for stunning visual contrasts in Bong’s hands, even as grubby as things can be, this is a gorgeous film.

When the violence erupts, it isn’t your typical stylized Hollywood variety. Without being overly graphic—there is ample blood spatter, but that’s about it—there is a visceral rage and brutality to the action that can only be the result of a long, slow build. These people have had the boot of people like Mason (Tilda Swinton) and the mysterious Wilford (Ed Harris) on their necks everyday for almost 20 years, and this isn’t a romanticized picture of revolution, this is an animal eruption. No one is safe, and the film is full of deaths that are legitimate surprises.

The way Snowpiercer is least like your standard Hollywood movie is in the way that it never needs to spell out every last element—TWC head Harvey Weinstein said he wanted the edits because he didn’t think American audiences would be able to understand the film. Events unfold naturally and you come to your own conclusions instead of having everything spoon-fed to you. This isn’t a black and white story full of definites, there is room for your individual interpretation.

You get the information you need when you need it. After an information dump that sets up the basic tenets of the time and place, all of the world building is woven into the narrative. Based on a French graphic novel, the script, from Bong and Kelly Masterson (Before the Devil Knows You’re Dead), takes its time unveiling the details, and you constantly gather new information. This allows the film, story, and characters to grow and evolve as they progress.

You think you know Curtis, but his motivations run much deeper than you even suspect initially, and Evans gives the most varied, intense performance of his career. Swinton is equally as fantastic as Mason, a vehement idealist who talks a much bigger game with a gun in her hand and an army at her back. The supporting cast includes Jamie Bell, Song Kang-ho, Octavia Spencer, John Hurt, Ewen Bremner, Ko Ah-sung, and more. Even in relatively small parts, the script never shortchanges any of them, and in this wide array of characters, all are fully formed in their own right.

Snowpiercer is thematically dense and the kind of film open to endless debate. Bleak and grim and almost desolate, there is a spark of hope, just enough to keep the gloom and doom from becoming oppressive. In both a big picture sense, as well as on an individual level, Snowpiercer, like the train, is never static and always moving, changing and evolving as the rebels crawl forward, in both a figurative and literal sense.