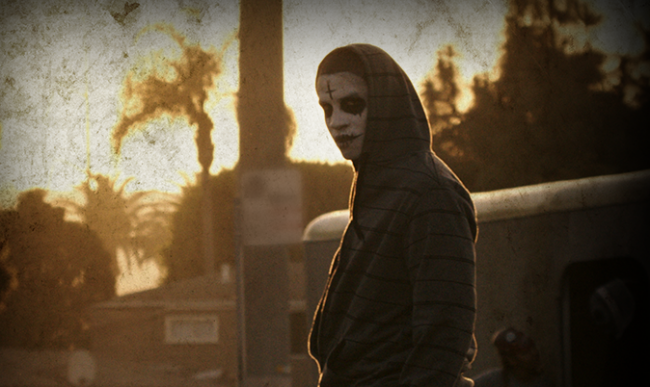 When “The Purge” opened last summer, it was a huge success. With a budget of $3 million it eventually earned more than $89 million worldwide, and as a result, barely a year later we have James DeMonaco’s sequel, “The Purge: Anarchy.” You can be forgiven for having reservations about this movie. After all, it wasn’t even green lit when the original opened, and a year from approval to a finished script to shooting to post-production to a wide release, is almost unheard of and doesn’t bode well from a quality standpoint. So the fact that this movie is good, better than the first—though it is definitely more of an action film than straight horror—may come as a surprise for many of you.

“The Purge” tells a relatively contained story, framed as a home invasion it has a limited number of settings and characters. “Anarchy” is set in the same world, the same night actually, but offers up a wider view of the dystopian society of the first film. While this isn’t a perfect movie, it is a modern interpretation of those grim, gritty, exploitation style revenge thrillers from the late 1970s and early 1980s. And I mean this is just about every way, it has a similar aesthetic, and succeeds and fails in the same areas as those films.

We’re not talking about high art here, “Anarchy” was obviously made on a truncated schedule, and that shows through. Stylistically, this film is very workmanlike, there are no frills or gimmicks. You can imagine the filmmakers on the set, grabbing a shot quickly, one that may not be great, but good enough, and moving on. This feels very much like how the likes of Roger Corman would produce films on the cheap with a quick turnaround.

The premise of “Anarchy” is the same as the first. In the near future the New Founding Fathers of America, in an effort to combat skyrocketing crime rates, have decreed that for one night a year, all crime, even murder, is legal. Apparently all we, as a species, want to do is hack each other to bits, and because of this annual night where we can get our collective ya-yas out, there is virtually no crime for the rest of the year. Instead of focusing on a single, wealthy family, this film follows three sets of people, showing how the proverbial other-half lives. 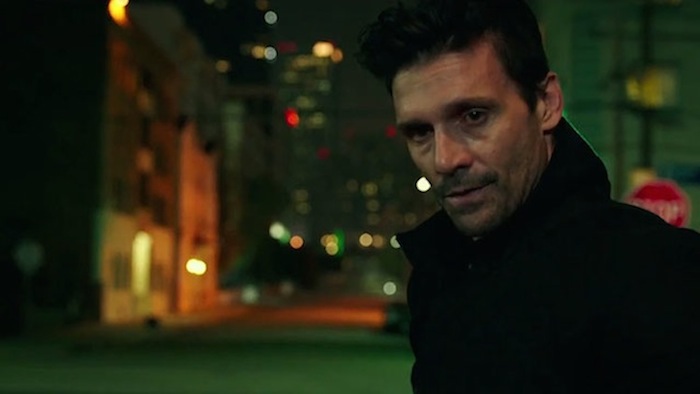 Eva (Carmen Ejogo) and Cali (Zoe Soul) are a mother and daughter who live in the inner city and can’t afford to properly protect themselves and their home; Shane (Zach Gilford) and Liz (Kiele Sanchez) are a couple having relationship issues, whose car breaks down on the way out of town in the worst possible place at the worst possible time; and Frank Grillo plays the obligatory badass, willingly on the street, looking for a little payback. His stoic countenance is the high point of the film. True to form, he doesn’t have a name or much backstory for most of the movie, and when you do learn what to call him—which happens in the last few moments—he is known only as Sergeant. Of course, all these threads come together before long and must find a way to survive the night together.

Where “Anarchy” is best is in the build up. A quick title card delivers all the information you need, and as you meet the key players, all preparing for the night ahead in their various ways, DeMonaco, who wrote and directed this film and the first, cranks up the tension so that when things finally explode, you’re ready, not to mention a little spooked. Creepy imagery—again, he makes good uses of characters hiding behind masks and not speaking—and a sense of dread permeate the early portions of the film. He juxtaposes Sergeant’s relative calm, cruising the streets in his custom-made, armor-plated battlewagon like a Mad Max figure, with the frantic desperation of Eva, Cali, Shane, and Liz, to great effect.

When the characters are running through the streets, trying to avoid being murdered, this is where “Anarchy” is the most entertaining. It’s a little bit “Judgment Night,” a little bit “Running Man,” with a nice touch of “The Warriors” thrown in for good measure, and it is just as fun as that sounds. Packs of hunters roam the streets with dogs and flamethrowers, the wealthy pay to hunt and kill the poor, and there are hints of wider conspiracies going on. The world is fairly well put together, and there’s more in play than you’re initially led to believe. A film can only do this for so long, and when you start getting into things like relationship drama and awkward asides that derail the main narrative thrust, the film gets significantly less compelling.

Like many of its predecessors, “Anarchy” tries to have a larger political point, with predictably mixed results. The idea of class is front and center, but it is a superficial, oversimplified, freshman-year consciousness. Poor people tend to get screwed over quite often, it doesn’t go much deeper than that. While the wealthy have the resources to protect themselves with weapons, guards, and high tech security systems, people like Cali and Eva are left to fend for themselves, preyed upon not only by their own neighbors, but by those who can afford to indulge their more base, carnal desires in a “Most Dangerous Game,” “Hard Target,” kind of way.

Michael Kenneth Williams (“The Wire”) pops up from time to time in Internet clips as Carmelo, a radical preaching class war and revolution, but he is so hammy, heavy handed, and over the top that it’s difficult to take him seriously. When he finally shows up in the action, however, he does make one hell of an entrance. There are elements obviously meant to call to mind vigilante militias and the like. As with so many movies of this ilk, these attempts are scattered an ineffective, and the film is best when it allows itself just to be what it is. While trying to deliver a message about violence in America, it winds up being more concerned with the violence than saying anything about it.

“The Purge: Anarchy” isn’t the kind of movie that one, gets made much anymore, and two, that finds its way into theaters on this scale. Most films of this ilk are relegated to the direct-to-video and video-on-demand markets, so just the fact that you’ll be able to walk into just about any cineplex in the country and buy a ticket for this is something for fans of this grim style of action to celebrate. Like the first film, “Anarchy” lays out an interesting premise, and though it never fully capitalizes on that, you have to give it points for trying. There is little subtlety or nuance to be found, but if nothing else, this kind of hard-R-rated action definitely provides a different viewing experience than most of the big, watered-down summer releases.

Posted by Brent McKnight at 2:59 PM