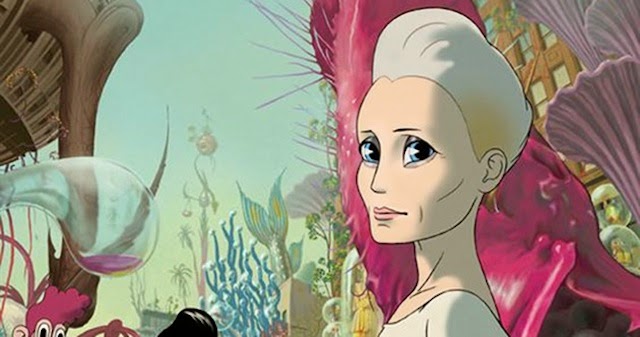 The opening shot of Ari Folman’s (Waltz With Bashir) The Congress is the single best part of the movie. Harvey Keitel’s silver-tongued Hollywood agent Al talks off screen while the camera focuses solely on Robin Wright (The Princess Bride). Playing a version of herself—that is, an actress named Robin Wright—the long take is nothing but her reactions. It’s like she’s giving a demonstration of how to act. There’s nothing huge, every move is so subtle that you almost miss them, but she conveys an incredible range of emotion and feeling. She’s mesmerizing, and from this moment on all you want is to watch her to see what she does next. The problem with this live-action/animation hybrid is that it is a slow, steady downhill slide from this beginning.

Loosely based on Stanislaw Lem’s novella The Futurological Congress, Wright sells her image to Miramount Studio—this is where the future of movies are going—to do with as they like. Once they scan her expressions, body, and emotions, the execs can, and do, simply plug her computer-generated likeness into any vapid blockbuster they please. 20 years later she attends the Futurological Congress in an animated zone and the film turns into a Day-Glo version of Heavy Metal full of empty philosophical asides. There are multiple jumps in time, utopias where you can become whatever you want, and insurgents with an anti-technological bend.

But The Congress is never anywhere near as interesting or exciting as this description sounds. Plodding and dull, it takes absolutely forever to get anywhere, and worse, when you do finally arrive, you don’t particularly care. Trying to be existential and mysterious, the film is needlessly obtuse, and assumes causal connections that do not exist. The script wants to be meta and self-referential in the vein of Being John Malkovich, but isn’t nearly as clever as it thinks it is, and, wrapped up in its own sense of importance, you walk away with nothing of value.

The dialogue is full of maddening exchanges that make you want to scream, like: 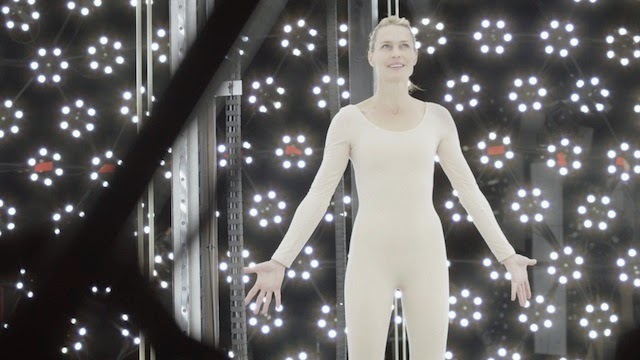 Playing up Wright’s reputation for being difficult to work with, the scanning process is the last moment where you’re engaged in The Congress at all. Again, her reactions to Al telling a story run the gamut of emotions, and, like the opening, this is a fantastic display of skill and craft. She barely speaks, so her face tells everything. Shortly after this moment, however, when the film goes full cartoon, you lose that completely.

Folman continues to attempt to make similar use of his star, but the animation isn’t detailed enough to allow for any change of expression, let alone with any subtlety. Before, miniscule changes in her face and position indicate her inner state and tell the real story, but what you’re left with is a blank-faced cartoon staring out a window, portraying nothing. What works with a real live person, one where you can see ever last wrinkle, move, and nuance, is lost as her reactions flatten out on a two-dimensional delivery system.

Switching from live action to animation, The Congress proves its own point, illustrating what films would lose if they were created entirely without real actors. All humanity, any substance, and audience interest evaporate. For a moment, as Wright’s world animates itself, you think to yourself that this could be fun and crazy, that you’re about to see something unique and cool. Unfortunately, this initial optimism also dissipates. An element that starts out as something special loses any appeal once it becomes so ubiquitous. And the animation isn’t even that fantastic to begin with. At best, it’s rehash of psychedelic underground 1970s comics, at worst, it looks like something Rob Zombie crapped out.

Everything about The Congress is flat and empty. While she has truly stunning scenes, Wright is never particularly interested either way about selling her likeness. She claims to be completely devoted to her son, Aaron (Kodi Smit-McPhee), who is losing his hearing and sight. In fact, her quest through cartoon-land is to get back to him—with a slight detour in the form of a half-assed romance with a toon named Dylan (voice by Jon Hamm)—but there is never any urgency, especially since the journey takes decades and decades and decades.

By the time you get to the end, after more than two full hours of meandering, the resolution comes so quick that you had no idea anything in the movie could move this fast. Maybe the movie bored itself so much it was like, okay, let’s wrap this up and get the hell out of here. The Congress wants you to wonder what is real and what isn’t, it wants to be philosophical and spiritual and a deep treatise on the nature of existence. It screams meaning, meaning, meaning in every frame, but the argument is never convincing and you leave as empty handed as you came in.

The Congress in now available on VOD and will have a limited theatrical run beginning on August 29.

Posted by Brent McKnight at 8:59 AM