'Dawn Of The Planet Of The Apes' Movie Review 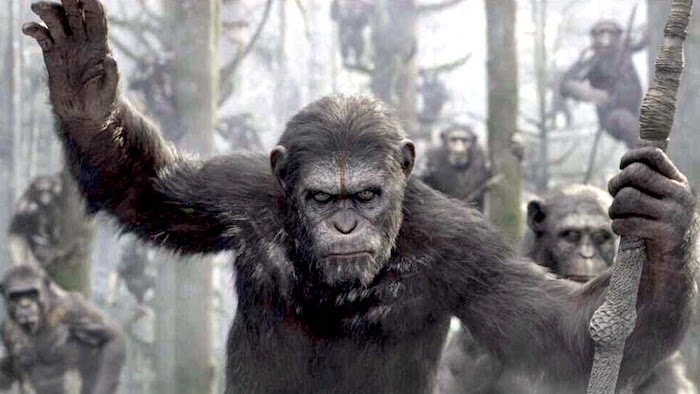 In 2011, Rise of the Planet of the Apes rebooted the beloved franchise in a way that made many people forget about Tim Burton’s disastrous attempt to do the same thing in 2001. Rise was far better than most of us expected it to be, but the follow up, Matt Reeves’ Dawn of the Planet of the Apes is one of those rarest things, a sequel that not only tops its predecessor in every way, but straight up blows it out of the water. And I like Rise, quite a bit actually, but the follow up is simply that much better. This is up there with Edge of Tomorrow and Snowpiercer vying for the best movie of the summer. Epic and bold, it, in true Apes fashion, aims to examine the animal in man by looking at the more human side of the animals.

Dawn is a harrowing adventure, full of tension and intrigue that keeps you leaning forward toward the movie screen throughout the entire film. Ten years have passed since Rise, and in the wake of great ape escape a vicious virus—called the Simian Flu, though it is really a manmade strain—has ripped through the human population. While the humans have struggled to survive, tearing apart the very fabric of society, the apes have thrived in the wilderness, building a civilization of their own. In fact, neither side is even sure if the other still exists, they’ve got their own concerns.

When the humans and the apes come into contact once again, however, all of the old hard feelings come bubbling to the surface. Many of the apes suffered greatly at the hands of the humans, while you’re hard-pressed to find a human who didn’t loved ones to the plague they blame the apes. Distrust, fear, and desperation make for a dangerous combination in the best of times, and while individuals like Malcolm (Jason Clarke) on the human side, and the ape leader Caesar (Andy Serkis), push for peace, others, like the one-eyed bonobo Koba (Toby Kebbell), and Dreyfus (Gary Oldman), leader of a colony of survivors in what used to be San Francisco, inch the two sides to the brink of war.

From the very first frame where you see the titular creatures, you can’t help but marvel at the character design. These don’t look like actors running around with computer-generated layers piled on top of them, they look like actual animals. You can distinguish every last hair, every drop of water on their fur as they stand in the rain—it’s almost always raining—and the subtle nuance of every facial expression comes across as clearly as if you were watching an actual person. My point is, the effects are so good that the apes look real. And they have to, otherwise the entire movie would fail.

But then a funny thing happens. You go from marveling over how incredible the special effects are to not seeing them at all. They become that natural, that much a part of the landscape you don’t notice they’re made of pixels. Character and story quickly take over, and instead of merely gawking, you find yourself emotionally invested in the events on screen. This is the highest praise I can heap on the visual effects, that you don’t pay any attention to them. They’re a make or break proposition for this movie, and they deliver in full. Actors like Serkis and Kebbell, working in motion capture suits, give performances that are every bit as powerful, more so if we’re being honest, as their less encumbered counterparts.

Caesar and Koba are the standout characters in Dawn, but they’re not the only memorable individuals. On the human side, Malcolm has the most to do, but one thing the script from Rick Jaffa and Amanda Silver does is create complex, sympathetic characters in relatively limited space. For example, Malcolm’s lady-friend, Ellie (Keri Russell), and son, Alexander (Kodi Smit-McPhee), don’t get many lines, but you witness enough of their strained relationship that you feel for and identify with them. No one ever sits down and lays out their entire backstory, but the way the script is constructed, the way the characters act and interact—both human and ape—paints a complete portrait. You don’t need to know every last speck of detail to know these characters or understand their motivation. They may be damaged and wounded, but they’re also capable of hope, joy, violence, friendship, destruction, and all of the various elements that make up an actual person. Or, you know, a super smart ape.

Reeves makes fantastic use of the 3D technology to create a fully immersive visual world. Again, right from the beginning, he takes great pains to pull you into the screen. As apes swing from branch to branch through the California Redwoods, the camera follows their movement, placing you right there with them. Surrounding you like this makes you feel like a part of the action. You’re among the apes as they experience the shock of encountering humans for the first time in a decade, and as the humans peer over their walls at an army of apes on horseback, a truly terrifying sight to behold, your heart jumps up into your throat, just like theirs.

Dawn of the Planet of the Apes is a near perfect combination of everything you want out of a movie. The film works as spectacle and adventure and appeals to a mass audience that only wants entertainment, but at the same time, it also functions as an allegory and on deeper thematic levels. Every last element, from the script to the visuals to the performances, comes together to elevate what surrounds it. While some movies are an endless downward spiral, Dawn is the polar opposite, continually building, becoming so much more than a mere sum of its parts; a haunting film that sticks with you long after you leave the theater.

Posted by Brent McKnight at 3:54 PM

Email ThisBlogThis!Share to TwitterShare to FacebookShare to Pinterest
Labels: dawn of the planet of the apes, Movie Review, Sci-fi