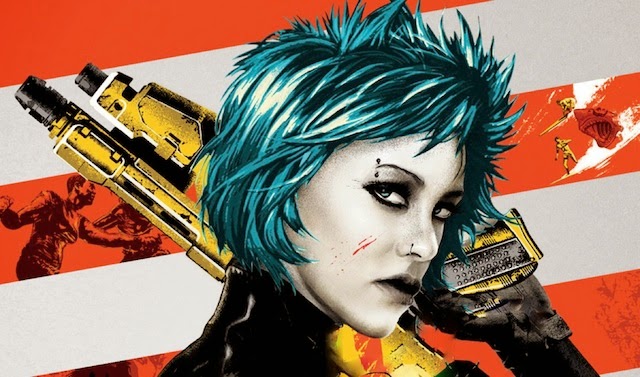 500 years in the future, Koko Marstellar is a former corporate mercenary-for-hire now living the good life running boywhores and slinging booze on the Sixty Islands, a manmade archipelago where rich travellers indulge their wildest, most base desires. It’s a cushy gig, but one that comes crashing down around her ears in spectacular fashion as her old pal slash new boss, Portia Delecompte, decides it is high time to pay Koko back for…well, she can’t quite remember, but for it must have been pretty major. Thus kicks off of the high-octane, ass-kicking plot of Kieran Shea’s new novel Koko Takes a Holiday, which runs from the pleasure islands of the Sixty all the way into low-Earth orbit and back again.

This is one instance where you can throw conventional wisdom to the wind and quite literally judge a book by its cover. Take a single look at the exterior packaging and you’ll have a fair idea of whether or not you will enjoy this book, as it functions much like a movie poster. You get a good look at a rendering of the titular protagonist, a shock of bright blue hair, skintight black bodysuit, overall Tank Girl stance, and, most importantly, a big ass gun in her hands. If you think this image looks totally rad, you’ll likely enjoy Koko, and all the adventures contained within, a great deal.

This isn’t high art by any stretch of the imagination, but it sure is fun. Shea isn’t a prose master, and there are a couple of quirks and peculiarities—lets call them idiosyncrasies—that may poke and prod some readers, but they’re easy enough to skip over. Koko functions like the literary equivalent of those big summer blockbuster movies that blast into your local metroplex, stomp all over the screen, and leave a smoking pile of rubble in their wake. But it may be even better than that, because the book, like its protagonist, has attitude for days.

Though the world building never goes into great detail or paints a complete picture, Shea doles out what he needs you to know delivering specifics about what directly relates to the action and story in front of you. He doesn’t waste time stressing over the larger picture. Over time these pieces come together to give you a mosaic of the time and place where Koko goes down.

The pace of Koko Takes a Holiday is, however, easily the biggest plus. It grabs you and drags you along, kicking and screaming for the entire lighting fast ride, much like Koko does for her companion, former security agent Jedidiah Flynn. For any problems or holes, the narrative never slows down long enough for you to notice them, let alone for you to dwell on many.

By far the most significant annoyances and speed bumps are the obnoxious little commercial breaks that Shea inserts in between some chapters. Similar to tools and asides that Paul Verhoeven uses in movies like RoboCop and Starship Troopers, while you can pull things like this off in a visual medium, they don’t translate well to the printed page. Reading the script for a commercial for the Sixty Islands, or the New One Roman Church of the Most Holy Liberator, does nothing to enhance your understanding the first time, let alone the fourth or fifth or sixth. You don’t need them, the story doesn’t need them, and they’re annoying as shit. Luckily, however, they’re easy to skip over should you choose to go that route, and you won’t miss anything.

Despite some awkwardness, like the slang-heavy book ends narrated by inconsequential characters that have no bearing on the narrative, the sheer breakneck speed of Koko Takes a Holiday, and the pseudo-cyberpunk posturing of Shea’s prose, are more than enough to propel you through this book cover to cover. Topping 300 pages, this won’t take you long to plow through, and while it isn’t anything super deep or meaningful, or that will stick around for any great length of time, this book is a fun momentary blast. 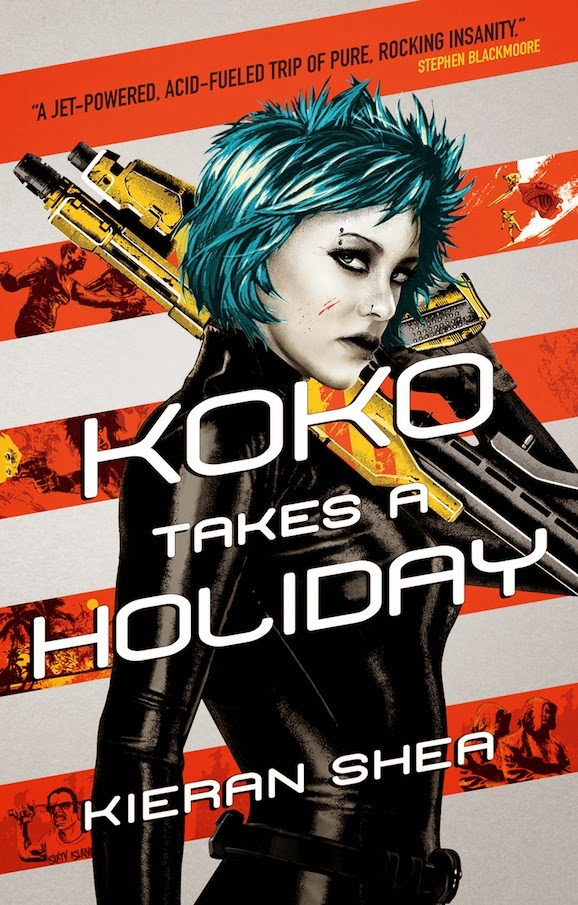 Posted by Brent McKnight at 7:14 PM