'Guardians Of The Galaxy' Movie Review 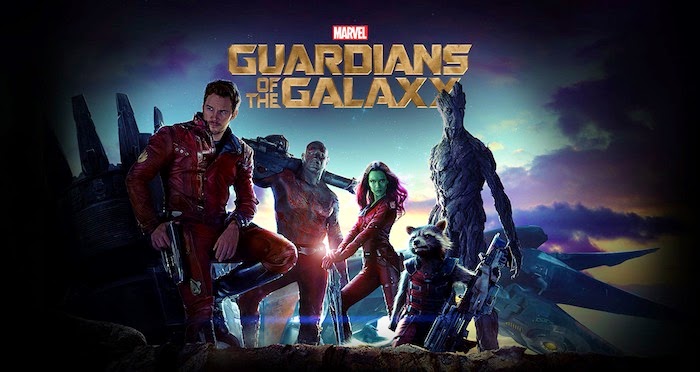 Have you ever wondered what would look like if Star Wars had an awesome baby with Indiana Jones? I spent a significant amount as a child dreaming of just such a scenario, and my best guess is that it would probably look a lot like Marvel’s latest addition to their cinematic universe, Guardians of the Galaxy. I’ve been looking forward to this title since the comic book giant made the announcement—how can you not get excited at the prospect of badass talking raccoon?—and while my hopes were high, the actual movie totally lived up to and exceeded my expectations.

Marvel definitely has it’s own brand and aesthetic. Even though different directors helm all the films, they have a similar look and feel, easily identifiable as “A Marvel Movie.” With Guardians, James Gunn has made something unique that stands on its own. As the MCU expands, reaching further into deep space, we’ll likely see this view again, and even though it obviously connects to the earlier films—most notably The Avengers—for now at least, Guardians of the Galaxy is a solitary entity. It isn’t as explicitly tied to other films as many of it’s counterparts, introduces new characters and worlds, and you never feel like it’s just there to set up other movies down the road.

Guardians really hit the jackpot with Gunn at the helm. The Slither director, who also wrote the script with Nicole Perlman, has created something that truly captures the fun and feel of reading a comic. The action, the sarcastic humor, the weird ass creatures, everything about this alien universe is right in Gunn’s wheelhouse. But as outlandish and tongue-in-cheek as everything is, he also creates legitimate bonds between viewers and characters. You care about this crew that includes a petty thief, an assassin, a madman bent on revenge, and two goons.

Though the bulk of the action takes place in the far reaches of the galaxy, the story begins on Earth. It’s 1988, and young Peter Jason Quill is watching his mother die in the hospital after a long battle with cancer. Moments after this defining trauma, he gets sucked up into a spaceship. 26-years later, Quill (Chris Pratt) has become a notorious outlaw named Star-Lord, at least in his own mind. Raised by a gang of thieves and smugglers called the Ravagers, he has never really progressed past his youth in many ways, and Pratt is a perfect fit for this kind of grown-ass man-child. Reckless and prepared to throw down with the likes of Korath the Pursuer (Djimon Hounsou) and his goons while attempting to steal a mysterious orb that may have great powers—which he plans to sell for a huge profit—Quill also got the sense of humor of a stoned adolescent. 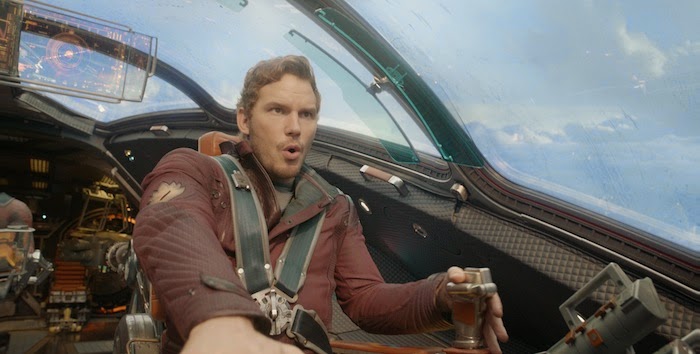 As you can imagine this lifestyle lands him in trouble with the law, and while doing time in the notorious prison the Kyln, he bonds with a bunch of weirdoes, aliens, and outlaws that forms the core of the core of the film. Among them are the green-skinned, adopted daughter of Thanos (Josh Brolin) Gamora (Zoe Saldana); the big, blue, literal-minded Drax the Destroyer (Dave Bautista); the aforementioned talking raccoon, Rocket (voiced by Bradley Cooper); and an eight-foot-tall alien tree named Groot, who only says three words: “I am Groot.”

Together these unlikely allies come together to save the galaxy from the nefarious Ronan the Accuser (Lee Pace). Ronan is set up not only as a villain, but as a rogue agent, a terrorist and religious fanatic about to get his hands on a weapon mass destruction. He is a part of the Kree Empire, who has entered into a peace treaty with their traditional enemy, Nova, which infuriates him, sending him into a full-blown genocidal insurgency. As complicated as all of this sounds, and as many threads and stories wind together, the narrative is surprisingly clear and straightforward, propelled forward by quick, smooth pace.

As dire as the situation, I cannot stress enough what fantastic fun Guardians of the Galaxy is. Gunn and company capture the swashbuckling high adventure of old-time serials. The sheer energy and humor of the film surpasses not only anything that Gunn has done up to this point—the massive budget also dwarfs that of the $15 million Slither, or the $2.5 million spent on Super—but he doesn’t miss a beat.

Combining huge, spectacle-scale special effects, giant practical sets, and a massive scale, Guardians also works on a narrative level, and as the story of strange, unique, very human—even when they’re not—characters. Bringing together the big and little, the result is a spectacular piece of summer fun that has everything you want out of a blockbuster, comic book adaptation, and science fiction movie.

Posted by Brent McKnight at 2:47 PM