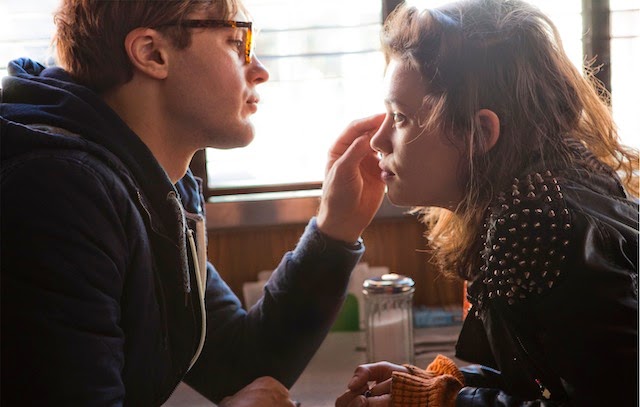 It’s been a big summer for science fiction movies, both in the sense of the number of options, as well as sheer size and spectacle. We’ve had giant robots (Transformers: Age of Extinction), giant prehistoric monsters (Godzilla), and giant movie stars like Tom Cruise (Edge of Tomorrow). And this isn’t even taking into account a swarm of super smart monkeys (Dawn of the Planet of theApes) that recently arrived, or the gang of adolescent turtles (Teenage Mutant Ninja Turtles) and the talking raccoon in deep space (Guardians of the Galaxy) that are yet to arrive.

If you’re looking for something a little more on the low-key side of things, something with way more ideas than explosions and animated creatures, you definitely need to check out Mike Cahill’s indie sci-fi feature I Origins. Building up to the movie, I had concerns. I’m not a fan of Cahill’s last esoteric take on the genre, Another Earth, and all of the trailers make this look like one of those stories where science and fact are brushed aside by airy, unfounded assertions and annoying hippie, but-how-can-you-really-know spiritual nonsense. While this is definitely a science versus faith movie, Cahill who both wrote and directed, strikes a solid, sensible balance between the two sides, letting you reach your own conclusions. The result is worth your time, and likely to inspire spirited, intelligent conversations long after you leave the theater.

I Origins follows Dr. Ian Gray (Michael Pitt), a messy-haired hipster scientist fascinated by the evolution of the human eye, as he works to disprove the existence of God. The main purpose of the film is to try and reconcile these two seemingly disparate ends of the spectrum, and show that science and spirituality may not necessarily be mutually exclusive. On the surface that sounds impossible, and I won’t get too far into it because that would ruin the main thematic thrust of the movie, but again, Cahill finds a decent middle ground where the two sides can occupy the same space, as surprising as that may be.

There are two women in Ian’s life, one that represents each side of this debate. His lab partner, Karen (Brit Marling), shares his analytical mind and devotion to hard data. When he meets free-spirited, passionate, poetic Sofi (Astrid Bergnes-Frisbey), she opens up an emotional world to him that contrasts with his measured, logical professional life. She forces his scientific mind to examine and come to terms with love, loss, and emotion in ways it never has before. And what begins is a comparison that highlight the disparities, ends with the knowledge that maybe they’re not quite as different deep down as they appear on the surface. 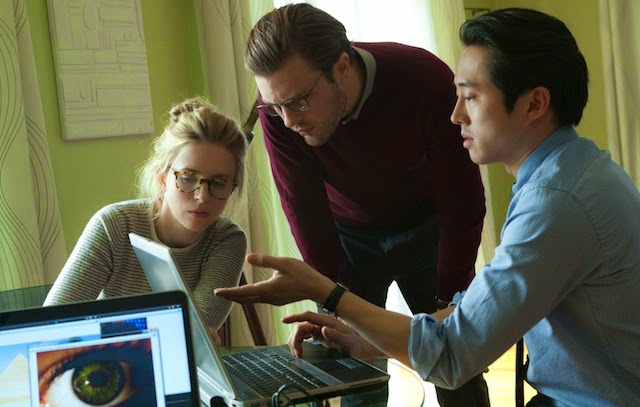 Cahill takes the plot and characters in unexpected directions, including dragging Ian across the globe searching for something that shouldn’t exist. Pitt and Marling play their critical, rational characters to a tee, filling them with a humanity that makes them engaging, where they could have very easily been cold and distant. While Bergnes-Frisbey has a little going on under her lovely exterior, she primarily relies on her beauty and alluring accent to carry her through. It’s easy to understand why Ian, or anyone, would fall in love with her, despite a frustrating and stubborn inability, or unwillingness, to accept anything as definite. The Walking Dead’s Steven Yeun also shows up as Ian’s co-worker, friend, and roommate and provides moments of levity and fun.

The whole of I Origins has a very twee, indie feel and sensibility that will turn some people off, especially the first act. Ian and Sofi have a hipster-sex-fantasy meet cute at a Halloween party. But Cahill brings a unique, cool visual style to the film that adds layers to a quiet, subdued story. Eyes play an important role—thematically, plot wise, and visually—and there are numerous stunning close ups of retinas, unique and individual as our fingerprints. He uses a string of reflections and graphic cues to lead Ian through the film, all augmented by a haunting score and soundtrack that creates a nice bleary, dreamy feel.

When I Origins focuses in sharply on either the science or the spiritual—personified by Ian and Karen working feverishly in the lab and Ian and Sofi naked in bed smoking cigarettes debating the nature of God, respectively—is when the script strains the most and the pace falters. You get weighed down in the mechanics and minutiae, and the back and forth of two sides that refuse to give an inch. Jumping seven years into the future, after tragedy, there some leaps and coincidences that are both questionable in nature and given more meaning than they really have.

Cahill’s made up pseudoscience is a sticking point in a few instances, though not as many you might expect, and the film is at its best when it is about the people and their interpretations and reactions to events. There are no concrete conclusions either way, and while I Origins has interesting points and is more open, welcoming, and compelling than Another Earth, the ultimate purpose is never clear, and while some viewers will fall in love, it won’t work for everyone.