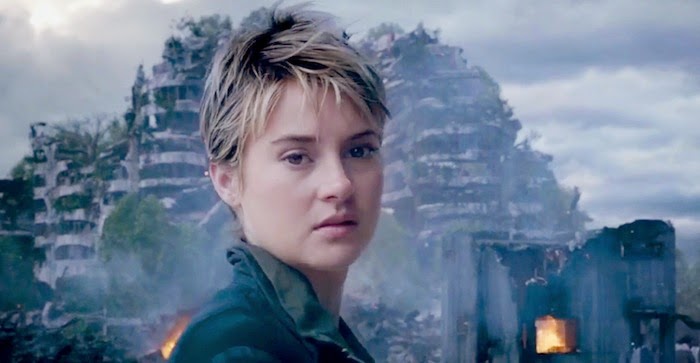 The Divergent Series: Insurgent, the latest chapter in The Hunger Games heir apparent, is a flaming-hot, crazy-ass train wreck. And I mean that in both the most entertaining and terrible ways possible. To be sure, this is a significant improvement over the previous film in the family, 2014’s Divergent. It’s not without serious flaws, and I don’t know if I’d go so far to call it good or actually recommend it, but while it can be tedious and asinine, random weirdness and strange flourishes mean it can also be pretty damn entertaining.

The action picks up shortly after the last one left off. Beatrice “Tris” Prior (Shailene Woodley) and Four (Theo James) are on the run from the nefarious Jeanine (Kate Winslet) who hunts them down because they’re Divergent and don’t fit in—there’s more to it, but that’s the gist. They still live in the same, overly simplified society that you saw the last time out, and that is, again, the film’s biggest weakness. When they harp on the fact that the remnants of humanity in this dystopian, post-apocalyptic world have been divided into five factions based on their dominant personality trait, and that everyone somehow thinks this is the best way to live, you can’t help but groan.

Though there are entire scenes of this, and listening to overly serious dialogue about living your life by one guiding principle is frustrating and stretches every last bit of credulity you can muster, fortunately it’s pushed more to the side enough that you can largely ignore it as the pace picks up. The bulk of the story is Tris and Four trying to avoid detection, occasionally running from Jeanine’s forces—she’s now instituted martial law, who saw that coming?—forming alliances with other rebels, and basically tooling up for a coming war.

And there is a shocking amount of murder. Obviously, when there is this much gunplay involved, there are going to be casualties, but I’m not talking about that. It’s not excessively gory or graphic, you rarely see much blood, but there are a stunning number of straight up executions. These movies are based on Veronica Roth’s series of young adult novels, but there are a half-dozen times where a character walks up to another, usually defenseless, often kneeling, looks them in the eye, says something to them, and coldly pulls the trigger. And it isn’t just villains either. The noble heroes, one of their mothers, everyone gets in on the act. It’s genuinely startling and a bit troubling.

The performances are fine. Everyone is solid, though they’re not asked to do too much. Tris generally fluctuates between being haunted by terrible nightmares about the death of those close to her and poorly controlling her rage. She’s got some anger issues, and there is a great deal of lower lip trembling and tears, juxtaposed with angry lunging and bones snapping. James is primarily there to look dreamy, and a cast of excellent actors—Naomi Watts, Ray Stevenson, Octavia Spencer—do decent work, collecting a paycheck for showing up, and not having to work too hard or strain anything.

Winslet has a decent amount of fun, adding a devilish, wicked witch embellishment here and there. Miles Teller, however, is having a damn fine time every moment he appears on screen. His Peter primarily exists in the first film to be a dick—Teller has even publicly stated that the entire process made him feel dead inside—but this time out he provides something that Insurgent otherwise wholly lacks: a sense of humor. The rest of the movie is so deadpan serious—which in itself leads to some moderate laughs—that Teller, who has an absolute blast with Peter’s smarmy, ambitious, out-for-number-one attitude, is a breath of fresh air. It’s not enough to save the movie, but it’s a nice change of pace from the sighing teen melodrama. He also serves as the guy who keeps the action moving. In moments when Tris and Four are just about to fall into a black hole of staring deeply into each other’s eyes, Peter is the one who is like, “Come on guys, there’s time for that later, lets get moving.”

And then things get weird, like hallucinatory fever dream weird. As Tris works to unravel the mystery left by her dead parents, as well as figure out why Divergents are so dangerous in the first place, she winds up in a series of simulations that are just bonkers, like burning apartments flying through the sky, people dissolving in front of her face, and skyscrapers bursting apart top to bottom. It all feeds into a very obvious, and literal, Matrix-style Messiah saga.

Maybe it’s the beneficiary of having zero expectations after Divergent, but Insurgent is a step in the right direction for the franchise, albeit a small one. The intended target audience is likely going to love this, and most of the rest of you are going to absolutely hate this, and you probably already know where you fall. For good or ill, with all kinds of murder, jumping on and off of moving trains, and hallucinatory fever dream, this is definitely a spectacle to behold, one that will leave you baffled, wondering what the hell you just watched. [Grade: C]

Posted by Brent McKnight at 3:33 PM