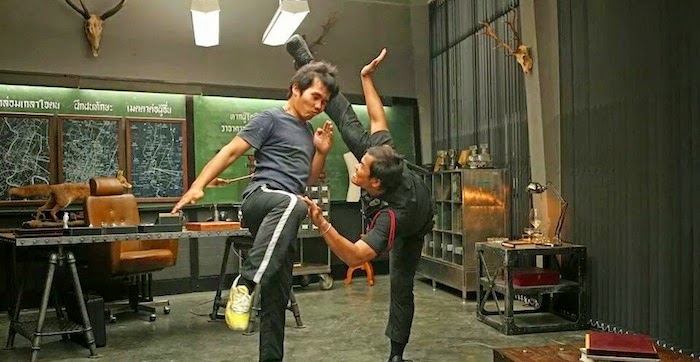 Tony Jaa fighting his way through a prison. You’re movie doesn’t need much more than that to have my full, undivided attention. Fortunately, if this trailer for SPL 2 (Sha Po Lang 2) is to be believed, there’s that and more, like a bus driving through a wall and people stealing human organs.

The Ong Bak star shows up in Furious 7 next week, but this looks like a much more substantial role. If we’re being honest, I don’t really recall much from SPL (also known as Killzone).  I remember liking it—how can you not like a movie with both Donnie Yen and Sammo Hung?—but that’s about it. Neither of those actors are in the sequel, but you’ve got a kick ass cast of newcomers, including Wu Jing, Zhang Jin, Louis Koo, and you can never go wrong with Simon Yam.

After busting a local gangster Hong in an undercover operation, hard-boiled cop Kit is captured by Hong’s men and wakes up in jail in Thailand facing a life sentence. While in police custody, Hong strikes a deal with Kit’s supervisor Wah to trade his freedom for Kit’s. Wah traces Kit to Thailand and manages to convince to new prison guard Chai to help save Kit because Kit is one of the few eligible bone marrow donors who can save Chai’s daughter, who’s suffering from leukemia. Hong breaks out of jail and flees to Thailand and order Kit’s executive. When Kit learns of Hong’s jailbreak, he’s determined to bring him to justice.

I don’t know about some of that questionable wire work at the end, but aside from that, SPL 2 looks right up my alley, though I do hope they ditch the Time for Consequences subtitle. That’s bad. This opens in Hong Kong this summer, so it’ll likely be even longer before the rest of the world can get our hands on this.

Posted by Brent McKnight at 5:43 PM