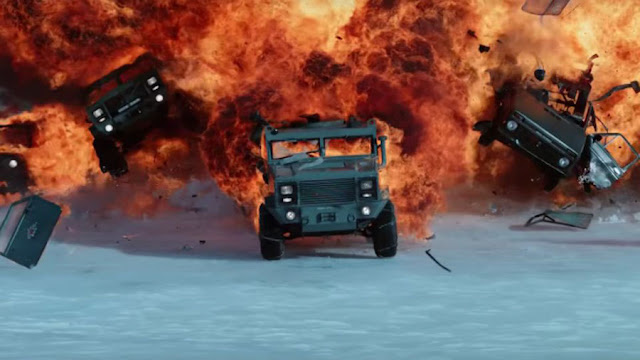 As long as they keep cranking out Fast & Furious movies, and as long as they continue to spiral into insanity, I’ll keep watching. And if you thought Furious 7, with it’s CGI Paul Walker and cars jumping from building to building and parachuting out of cargo planes was bonkers, well, you need to watch the new Fate of the Furious trailer. I don’t even know what they’re doing anymore, but hot damn do I love it. Seriously, there’s a submarine in a car chase, what more can a growing boy ask for?

The more we see from The Fate of the Furious (it’s both cringe-inducing and heart-warming that #F8 has caught on), the more insane and over the top it gets. This trailer doesn’t just up the ante, it goes all-in, to continue the poker metaphor. Come on, part of it looks like Mad Max on ice.

Where to begin? There’s so much mayhem. First of all, this is peak Rock. Dude catches a grenade launched by what appears to be an angry tactical Roomba. And, of course, he basically throws a damn torpedo while ice skating at high speeds hanging onto a car. It’s like he sat in a room with the producers and director F. Gary Gray and said, “I want to throw a torpedo, can you make that happen?” And they said, “Yes, Dwayne, yes we can.”

That’s how ridiculous action movies should be made. And with flying suits, tanks, and car mass suicide, that appears to be how The Fate of the Furious was contracted. I approve.

This chapter also continues the crew’s evolution from a group of car enthusiasts to an international cadre of super agents. Who saw that coming in 2001? But everything’s all topsy-turvy. Jason Statham’s Deckard Shaw is a good guy now, and Vin Diesel’s ultimate family man, Dominic Toretto, turns his back on his makeshift family. When Letty (Michelle Rodriguez) yells, “You gonna turn your back on family?” he turns his literal back on his family. Whoa, chills.

This trailer does hint at what many of us suspect and hope is true, that Dom’s betrayal happens against his will. Everyone’s all, “How can Dom be such a dick?” but when he says, “I got no choice,” it sure sounds like he’s compelled to do things he’d rather not. (My current working theory is that Charlize Theron is holding Brian O’Connor hostage, which not only explains why Dom might go rogue, but also Paul Walker’s absence—I know they tried to “retire” him last movie, but do we really believe Brian would sit one out when his people are in trouble?)

But don’t worry, for all the drama, there are still a lot of cars and butts in The Fate of the Furious.

Here’s a synopsis if you care about such things, but do you? Really? Is a submarine bursting out of the ice to participate in a high speed car chase not enough for you people? Damn, you are some greedy sons of bitches.

Now that Dom and Letty are on their honeymoon and Brian and Mia have retired from the game—and the rest of the crew has been exonerated—the globetrotting team has found a semblance of a normal life. But when a mysterious woman (Charlize Theron) seduces Dom into the world of crime he can’t seem to escape and a betrayal of those closest to him, they will face trials that will test them as never before.

From the shores of Cuba and the streets of New York City to the icy plains off the arctic Barents Sea, our elite force will crisscross the globe to stop an anarchist from unleashing chaos on the world’s stage…and to bring home the man who made them a family.

The Fate of the Furious burns rubber into theaters on April 14. And Helen Mirren is in this one, classing up the joint. Can't wait.
Posted by Brent McKnight at 8:35 AM