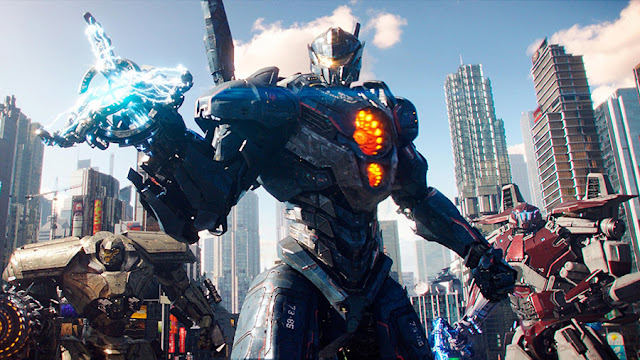 Guillermo del Toro’s 2013 Pacific Rim splits viewers into two categories: those who love it and those who think it’s dumb as shit. Personally, I think it’s dumb as shit, but I absolutely adore watching del Toro do his best impression of a kid in a sandbox banging robot toys into monster toys. That’s precisely what it is, and the finished product is precisely that much fun. I don’t know that it needs a sequel, or that one will be any good, but it managed to (just barely and thanks to the global market) squeak out enough money to justify a follow up. Good or bad, I’m going to watch it and the first real trailer for Pacific Rim: Uprising is here. Check it out below.

With a new director (Steven S. DeKnight, Daredevil) and an almost entirely new primary cast cast (John Boyega and Scott Eastwood take the lead this time), I can’t tell if they’re taking it more seriously (Pacific Rim wallows in the patent absurdity of the concept), but it looks that way. And I don’t care a whit, because as long as there are giant monsters smashing into skyscraper-tall mechs, I will watch the shit out these movies.

Pacific Rim: Uprising definitely has fun playing with all of these fun toys, upping the ante as they see fit. The Jaegers have fun new gadgets, like giant chainsaws, lightning whips, and dope ass morning stars. And do the Kaiju pull a Voltron and come together to form a bigger creature? Again, I just want to see some crazy nonsense on screen, whatever the particulars. Get in my eyeballs!

Boyega plays the prodigal son of the now-deceased Stacker Pentacost (Idris Elba), and I’m sure has to come back and prove his worth and all of that. Here’s a long, detailed plot synopsis if you care about such things:

John Boyega (Star Wars: The Force Awakens) stars as the rebellious Jake Pentecost, a once-promising Jaeger pilot whose legendary father gave his life to secure humanity’s victory against the monstrous “Kaiju.” Jake has since abandoned his training only to become caught up in a criminal underworld. But when an even more unstoppable threat is unleashed to tear through our cities and bring the world to its knees, he is given one last chance to live up to his father’s legacy by his estranged sister, Mako Mori (Rinko Kikuchi)—who is leading a brave new generation of pilots that have grown up in the shadow of war. As they seek justice for the fallen, their only hope is to unite together in a global uprising against the forces of extinction.

Jake is joined by gifted rival pilot Lambert (The Fate of the Furious‘ Scott Eastwood) and 15-year-old Jaeger hacker Amara (newcomer Cailee Spaeny), as the heroes of the PPDC become the only family he has left. Rising up to become the most powerful defense force to ever walk the earth, they will set course for a spectacular all-new adventure on a towering scale.

Pacific Rim: Uprising stomps into theaters on February 23, 2018. Try to contain your giddiness.
Posted by Brent McKnight at 9:47 AM