'Bright' Trailer: Will Smith Wants To Die In A Strip Club Gunfight 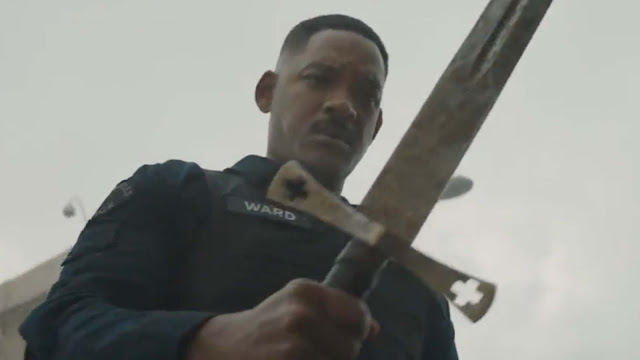 I have a new favorite movie line. It’s Will Smith yelling, “We’re gonna titty-bar gunfight die.” And yes, that appears to be an actual line from Bright, Netflix’s upcoming attempt to get in on the big-budget fantasy action market. Check out the new trailer below.

When Bright first hit the scene, a friend called and asked if they were making a Shadowrun movie, and from what we see, that’s not a bad comparison. This certainly does look like an RPG come to life, and I’m a guy who liked The Last Witch Hunter, so here we are.

I can’t tell if Bright looks straight bad or like crazy enough to be a crap ton of fun, while being bad, like the back half of Geostorm. But woof, that banter between Will Smith and Joel Edgerton, who plays his Orc partner, is rough anyway you look at it. But there’s a magic wand and Orcs and heavy-handed allegories about prejudice and racism, so, you know, timely or whatever.

Set in an alternate present-day where humans, orcs, elves, and fairies have been co-existing since the beginning of time. Bright is genre-bending action movie that follows two cops from very different backgrounds. Ward (Will Smith) and Jakoby (Joel Edgerton), embark on a routine patrol night and encounter a darkness that will ultimately alter the future and their world as they know it.

However Bright shakes out, it’s going to be interesting to watch. This represents Netflix’s biggest production thus far—the streaming monolith ponied up $90 for the project, including a $45 million production budget. That’s not too massive by Hollywood standards, but it’s a significant investment. Maybe they’ll actually promote this movie like a normal movie instead of dumping it without any fanfare.

Directed by David Ayer, Bright looks like a weird amalgam of his gritty cop dramas like End of Watch and Training Day and the more fantastic Suicide Squad. We’ll have to wait and see how that goes.

Bright also has a strong cast. Fronted by Will Smith and Joel Edgerton buried under layers of makeup, it also stars Noomi Rapace, Lucy Fry, Edgar Ramirez, Margaret Cho, and Ike Barinholtz. Max Landis wrote the script, so make of that what you will.

There’s already been talk of Bright 2, but let’s just wait until it drops on December 22 before we get ahead of ourselves. But what the hell, we get to see Will Smith have a shootout in a strip club, which feels like a Bad Boys 2 deleted scene with monsters, and I can roll with that.
Posted by Brent McKnight at 8:13 AM