This 'Den Of Thieves' Trailer Looks Like Discount Bin 'Heat' 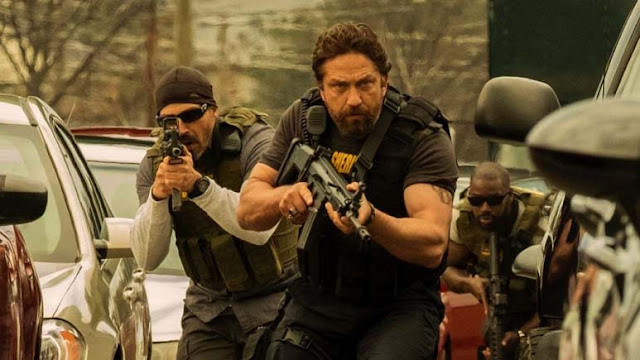 Why did it take me two full days to watch this Den of Thieves trailer? It’s everything I like: gritty no-frills action, bank robbers, a brutally generic name, Gerard Butler, O’Shea Jackson, a dude from The Wire (Pablo Schreiber), and a rapper (50 Cent). And it’s the guy who wrote London Has Fallen and A Man Apart making his directorial debut. And it looks like clearance-sale Heat. All of which means it’s just my speed. I knew it was out there, I just slept on it. But don’t worry, I rectified this grievous oversight and all is right with the world.

Whew, bullet dodged. I almost missed this one. I love that there’s no real plot beyond, “It’s the only bank that’s never been robbed, that’s why we’re going to rob it.” To be perfectly candid, I don’t need anything more than that, especially when there are as many bullets as we see in this Den of Thieves trailer.

Here’s an actual synopsis, not that it matters:

A Los Angeles crime saga in the vein of "Heat", DEN OF THIEVES follows the intersecting and often personally connected lives of an elite unit of the LA County Sheriff's Dept. and the state's most successful bank robbery crew as the outlaws plan a seemingly impossible heist on the Federal Reserve Bank of downtown Los Angeles.

This is normally the kind of thing that immediately hits the DTV market. I’m not entirely sure why it’s getting a theatrical release, but I’m glad STX is giving Den of Thieves a run. It can’t be Gerard Butler. We just watched Geostorm sink into oblivion this weekend (okay, maybe only I watched Geostorm). He does have the best intense crazy eyes currently in the game, and that does deserve to be seen on the big screen.