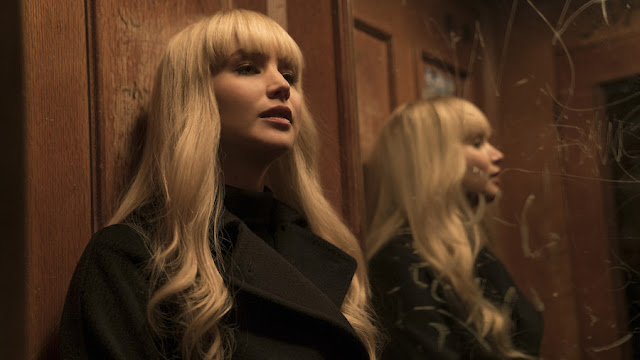 Red Sparrow exists in a strange middle place that doesn’t serve the adaptation of retired CIA officer Jason Matthews’ best-selling spy novel particularly well. It’s not tense or intriguing enough to stand with the best recent espionage thrillers, like Tinker, Tailor, Soldier, Spy. Nor is it pulpy and trashy enough to be fun and provide an illicit charge. It’s fine, if way overlong, but it’s just kind of occupies space.

Jennifer Lawrence reteams with her Hunger Games director, Francis Lawrence, no relation, for this predictable shrug of a dad-novel adaptation. Cloaked in a faux empowerment narrative that’s more or less an excuse to heap torment on its protagonist—who’s raped, nearly raped, or otherwise sexually humiliated multiple times in the first fifteen minutes of the film—it’s easy to see what the film hopes to accomplish. Red Sparrow wants to be edgy and provocative and subvert exploitation-style tropes. It wants turn genre trappings on their heads to make a point about men controlling and manipulating women. 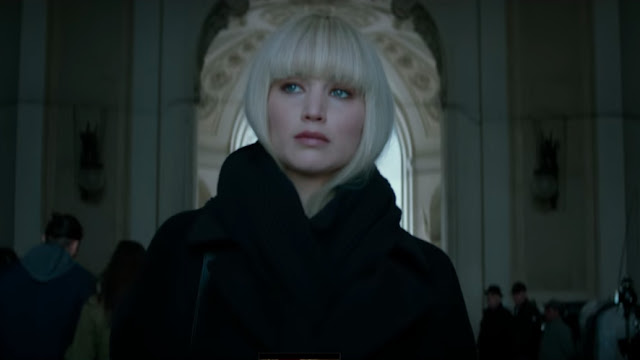 Instead, it fails to realize these goals and plays flat, like its main objective is to display J.Law in various states of undress with no grander purpose. The whole movie feels like a creepy old dude leering the young star. Obviously, that’s part of the point, but there’s nothing any deeper and no additional weight to this gaze. The film doesn’t do anything with the set up; it doesn’t make the audience feel gross and icky enough to question themselves—it tries very hard to shock, but for a movie explicitly about seduction, it’s woefully unsexy.

Again, stripping away any eroticism is part of the purpose. But it tries to play both sides of the fence, to show a dispassionate, clinical, utilitarian depiction of sex—the titular spies use sex as their primary tool. At the same time, it presents itself as a steamy, sensual thriller. All the while, it never goes far enough in either direction to make any say anything on any front. It’s all quite tepid and middle of the road, afraid to commit to any end. 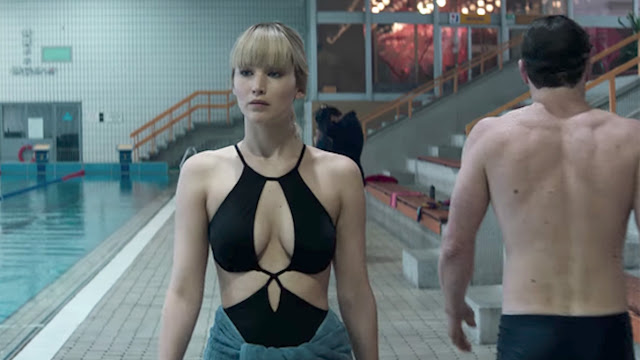 Even on a mechanical level, Red Sparrow delivers nothing more than middling excitement. As terrifying and horrible as it is, I do love that we once again live in a world where the Russians can be the go-to cinematic villains. They’re the best at being the worst; it wasn’t the same without them. So, I guess gold star on that front. (It’s like my Cold War childhood all over again, only now I have the wherewithal and perspective to find it even scarier than the first time around.)

A horrific on-stage accident derails the promising ballet career of Dominika Egorova (Jennifer Lawrence). When the former dancer witnesses something she shouldn’t have, her high-ranking intelligence operative uncle, Ivan (Matthias Shoenaerts), gives her a choice, death or becoming a Sparrow, a type of Russian super spy who are all young, hot, and use seduction to get what they want. This way, she not only gets to live, but also ensures the continued survival of her ambiguously sickly mother. 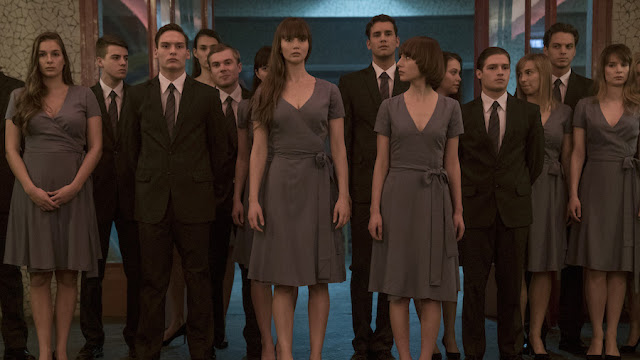 Red Sparrow’s strengths lie in the early going. It’s an interesting conceit, paints its heroine into a corner, and watches what happens as she attempts to claw her way out. What’s tantamount to a spy sex school montage, lays out the themes and ideas the rest of the movie fails to capitalize on—seduction, desire, breaking people down, sacrificing whatever needs to be sacrificed in order to obtain a goal, and so on. It’s all anchored by an ice-fucking-cold Charlotte Rampling as Matron. There’s not really much more to her than being a vicious, calculating schoolmarm, but she sends at least a few chills up your spine.

A relatively paint-by-numbers spy story occupies the bulk of the plot. There’s an American CIA agent, Nate Nash (Joel Edgerton), all manner of schemes, double crosses, and subplots—your usual espionage stuff. It’s passable, but all too rote to stand out. It wants to be a taut cat-and-mouse game where the audience questions Dominika’s true motives and loyalties. But in reality, the mystery’s easy to spot, it’s not difficult to pick up on her end game, and what remains doesn’t leave much of an impression. Except for a handful of admittedly brutal, visceral torture scenes. Oddly enough, I’ve often wondered why people don’t use skinning more as a torture in movies, and Red Sparrow apparently heard me loud and clear. Yeesh. 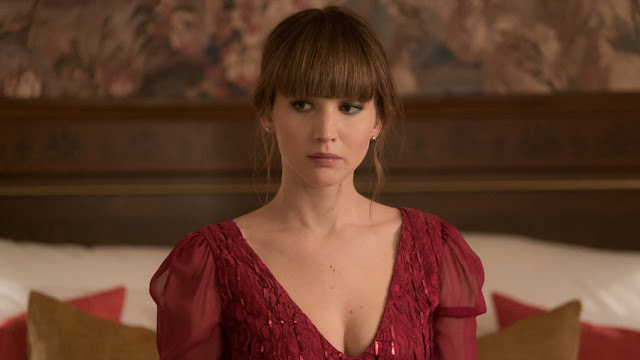 Jennifer Lawrence plays Dominika as stone-faced and stoic, reserved and resigned, but we see the internal machinations beneath the surface, even if her Russian accent is destined to throw some viewers. Joel Edgerton has an aw-shucks, down-home thing going on that, as a CIA agent, should probably hide something below. Problem is, there’s never anything else. For a spy, he’s shockingly up-front and earnest. What you see right away is, remarkably, exactly what you get.

Both Lawrence and Edgerton have an easy likability that serves them well. They’re compelling to watch on their own. Which is good, because the two stars don’t have much in the way of chemistry. She’s a seductress we never see seduce him (at least we never buy it); he’s a professional spy who’s never all that professional. Instead of developing, things just kind of happen like they skipped a few steps. 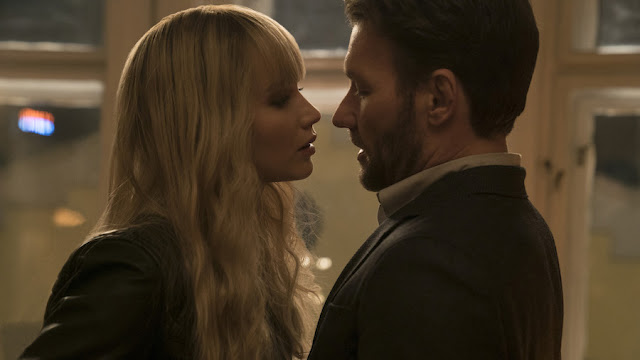 Basically, they’re fine. Everyone’s fine. The rest of the cast includes Jeremy Irons, Ciaran Hinds, Joely Richardson, Sakina Jaffrey, Bill Camp, and others, all being fine. Except Mary-Louise Parker, who shows up as a compromised American State Department worker. She’s drunk and corrupt and all kinds of whoo-hoo, and she’s an absolute delight for the short time she’s present.

Red Sparrow looks good. Frances Lawrence once again works with cinematographer Jo Willems, who shot the last three Hunger Games movies. They make nice use of the Eastern European architecture, both internal and external. Costumes and sets are all well appointed, from the grim school and brusque torture chambers to the lavish hotels and opulent opera halls. 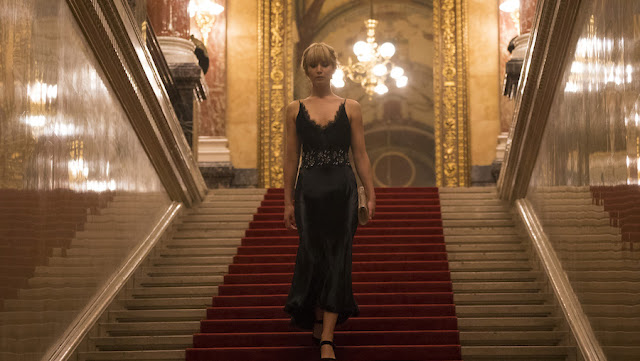 But Red Sparrow mistakes a slow pace for a slow burn. For a film that aims to be tense and thrilling, to keep the audience on a wire, there’s little suspense. Instead of deliberately building from one scene to the next, the narrative plods moment to moment. Honestly, the only times I felt any pressure at all were two late-in-the-game torture scenes. Aside from those fleeting dalliances, the rest of the film simply drifts without any momentum. [Grade: C-]

Posted by Brent McKnight at 9:21 AM

Your blog is great and your reviews too.
For me the film was entertaining and I liked the actress. The setting, photography, costumes. And yes, I agree the torture scenes were probably the best. Although in general, the film does not bring anything new to this genre and it reminds me of Nikita and point of not return..
In addition, from being called a mockingbird to a sparrow, it amused me in a certain way. Although that is rather anecdotal.