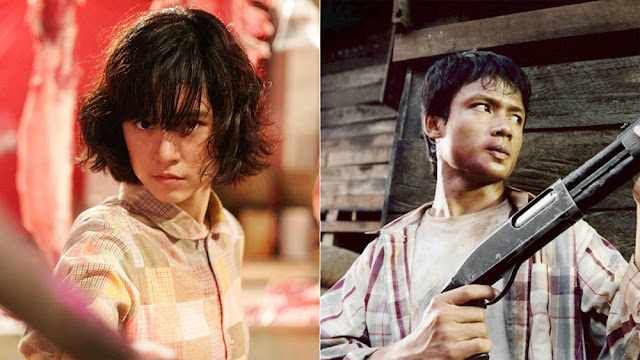 Well, this is good news for fans of movies where people get kicked in the face. It looks like JeeJa Yanin and the criminally underappreciated Dan Chupong are teaming up for for a badass martial arts action extravaganza called Red Cargo. Feel free to get excited.

City on Fire reports that Thai director Nonthakorn Thaweesuk (Somtum, aka Muay Thai Giant) will co-direct with South African filmmaker Senzo Zindela. It will be a collaboration between African Sollywood Films and Thai studio Kao Tayarn. That’s not a bad team up. I don’t know much about Zindela, but his partner in crime also wrote Ong-Bak 2, Born to Fight, and Power Kids (aka Force of Five), among others; edited the original Ong-Bak; and produced BKO: Bangkok Knockout, so he knows his way around this type of film.

Yanin is most known for Chocolate and Raging Phoenix, though she also appeared alongside Scott Adkins in Hard Target 2 and plays a role in the upcoming all-star actioner Triple Threat. Basically, the Thai actress is one of the best movie martial artists currently working and it’s awesome to see her get more of the recognition she so richly deserves.

And anytime Chupong shows up in a movie, you know lots of people will receive knees and elbows to the head and neck region. He only has eleven acting credits, but, like Yanin, they’re all badass. His resume includes appearances in all three Ong-Bak movies, Born to Fight, Dynamite Warrior, and The Tsunami Warrior.

Plot wise, Red Cargo sounds like a culture clash story by way of anti-poaching narrative in a Tom-Yum-Goong (The Protector) vein. All of which I can roll with. Here’s the actual synopsis:

For the first time in history, a Zulu and Thailand culture clashes when the son of Lion slayer, Senzo, confronts a dangerous Thailand con man. Vitaya controls rhino poaching business and illegal diamond mines in the region, everything goes wrong when one of the local young boys steals one of his rhino horns. In search for it, his man kill Senzo's fiancé. Hell breaks loose as the Zulu warrior can't let them get away with it without tasting his spear.

Red Cargo has been in the works since late 2016, and it marks a sizeable cross-film-cultural collaboration. Check out this concept video from last year that lays out the ideas and martial arts components.

Red Cargo should start filming in early summer—the production has an eye on a June kick off—and will do the bulk of shooting, if not all of it, in South Africa. In the meantime, JeeJa Yanin shows up in Triple Threat, which releases sometime this year.
Posted by Brent McKnight at 1:25 PM