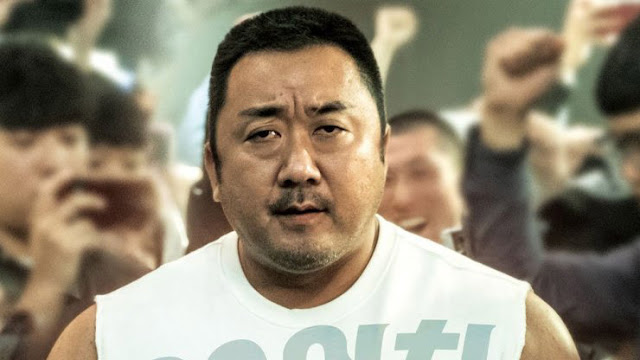 Directed by Menahem Golan, half of the team behind the venerable Cannon Films, the 1987, Sylvester Stallone-starring Over the Top combines the high family drama of a child custody battle with…competitive arm wrestling. And it’s glorious. Thanks, Menahem, you glorious madman! But it’s also pretty much the only real movie that speaks to the arm wrestling enthusiast. Until now. South Korea’s Kim Yong-wan is making his directorial debut with Champion, and he’s enlisted Ma Dong-seok to star. Check out the trailer and try to convince me this isn’t going to rule.

Yeah, I’m super into this. Ma Dong-seok is charming as hell and steals nearly every scene he shows up in, from The Good, the Bad, the Weird to Train to Busan and everything in between. So if anyone’s going to sell an arm wrestling movie, he has as good a shot as anyone. And he gets to show off awesome feats of strength, including, but not limited to, arm wrestling a car off of a scrap heap, or something. I’m not sure, but I’m excited to find out.

Like it’s spiritual predecessor, Champion is about more than just dudes holding hands and grunting and twisting. Don’t get me wrong, you’ll find plenty of that, but there’s also a family element that I’m sure brings the feels and all that. There has to be more than just one man’s quest for obscure sports glory, right?

Here’s a synopsis that more or less just repeats what I said, though I don’t know who “Mark” is (I do hope it’s actually a cameo from Stallone’s Lincoln Hawk, who shows up to teach our protagonist how to turn his hat around like a switch, though that’s probably asking too much):

With the help of legendary athlete Mark, Jin-gi dreams of a life changing experience in arm wrestling. When Jin-gi's sister Soo-jin appears with her children, the challenge will be found in more than just arm-wrestling.

Champion opens in South Korea in May, and I will definitely keep an eye out for this. It’s a Warner Bros. production, so hopefully it gets a release sooner rather than later.
Posted by Brent McKnight at 9:01 AM