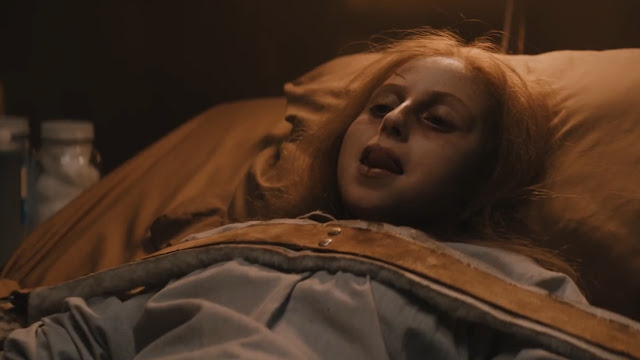 Possession movies are scary. That’s scientific fact. Home invasion movies aren’t always scary, but they can be terrifying. What happens when you combine these two venerable horror subgenres? It may look quite a bit like this trailer for Uruguayan director Guillermo Amoedo Schultze’s The Inhabitant (El Habitante). It might just make your skin crawl.

If you look at this The Inhabitant trailer, which premiered at Screen Anarchy, and the first thing that pops into your head is The Exorcist, you’re not alone. That first shot behind the priest and even the music echoes Friedkin’s classic. Not a bad place to start when making a demonic possession movie.

But The Inhabitant splices horror genes like a mad scientist, and there’s also a home invasion side of the story. More than home invasion, this is more robbers-rob-the-wrong-house style. They definitely get more than they bargained for when breaking into a wealthy household looking for a score. Think Exorcist meets Don’t Breathe and that’s the vibe I get from this footage. And that’s just dandy with me.

One night, 3 edgy sisters break into the house of a very important senator to steal money he got from bribes. While doing it, they hear strange cries coming from the basement and decide to go down to investigate. Below, tied to a bed and with signs of having been brutally tortured, the 3 sisters find the paraplegic daughter of the senator begging them to release her; and the girls decide to help her. However, what they do not know is that the girl was not tortured, but is possessed by a powerful darkness that will be responsible for opening the gates of another world.

Amoeda has directed a handful of features, like the horror mystery The Stranger and the sci-fi horror mystery Retorno. He also frequently lends his writing talents to big, broad romantic comedies, which makes for an interesting mix on his CV. American audiences are likely most familiar with his work via his collaborations with Eli Roth. The two worked together on the scripts for Knock Knock and The Green Inferno. That last fact may give me a few misgivings, but what we see in this trailer certainly makes up for any doubts I have.

The Inhabitant opens in Mexican theaters on June 8. Hopefully it makes its way north so I can get a look at it for myself.
Posted by Brent McKnight at 8:35 AM