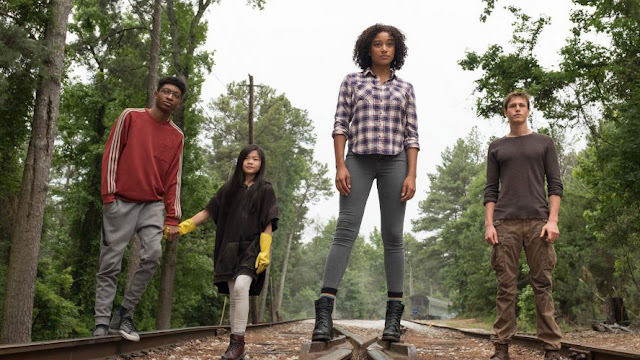 Movies franchises based on a series of young adult novels have, let’s just call it a checkered past. For every Harry Potter and Hunger Games, we get a flailing series like Divergent that limped along for a few chapters, and nonstarters like The Fifth Wave and The Mortal Instruments: City of Bones, that never get off the ground. So, audiences are wary about endeavors of this ilk, but that’s not going to stop Hollywood from trying. The latest attempt is The Darkest Minds. I know nothing about this saga, but I’m actually kind of into the new trailer for the film.

The Darkest Minds has a cool sci-fi hook. Disease kills 98% of the kids in America. The surviving 2% develop powers, so the government rounds them up and puts them in camps. It kind of dystopian superhero joint. There’s definitely an X-Men vibe (and, unfortunately, a little Fifth Wave), but it has room to work.

When teens mysteriously develop powerful new abilities, they are declared a threat by the government and detained. Sixteen-year-old Ruby, one of the most powerful young people anyone has encountered, escapes her camp and joins a group of runaway teens seeking safe haven. Soon this newfound family realizes that, in a world in which the adults in power have betrayed them, running is not enough and they must wage a resistance, using their collective power to take back control of their future.

I don’t know if this will be any good, like I said, this sort of effort represents a dicey proposition. I’ve never head of these books—a trilogy, of course—but that doesn’t mean much.

That said, this trailer doesn’t look half bad. There’s only so much a two-minute montage can tell us, and we’ve all seen good trailers for shit movies. Though maybe, just maybe, The Darkest Minds will be the one that breaks the YA curse and becomes the next big thing. It doesn’t look super expensive, so perhaps it will fall in that Maze Runner middle ground and turn a profit.

Also it has other elements that pique my interest. It’s directed by a woman—and an Asian American woman at that, which almost never happens—Jennifer Yuh Nelson. She helmed two of the Kung Fu Panda movies, and was rumored to be on the list to direct the remake of Kim Jee-woon’s A Bittersweet Life with Michael B. Jordan, a project I still hope fails to materialize.

It also stars a young woman of color, Amandla Stenberg, most famous for playing Rue in the first Hunger Games. Harris Dickinson, who broke out and ruined everyone in Beach Rats plays another main role. Gwendoline Christie also shows up as a teen bounty hunter, as in teen-hunting, not a teen herself, that would be awkward. And in general, The Darkest Minds looks to have a diverse cast in front of and behind the camera, which is heartening to see.

The trailer touts producers of Stranger Things and Arrival, but their credits also include titles like What Happens in Vegas, Why Him?, and Fist Fight, so do with that information what you like.

The Darkest Minds opens on August 3.
Posted by Brent McKnight at 11:18 AM