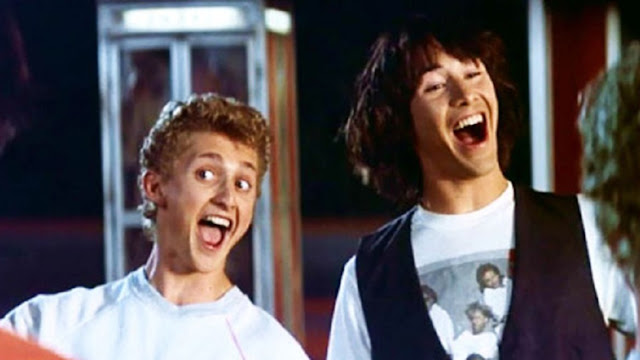 Talk about a third Bill & Ted movie has been going around for years. It’s one of those things that I never actually thought would happen—and one I’ve never been entirely sure I wanted, as the first two are perfect, and that comic sequel was good enough for me—but it’s apparently official: Bill & Ted Face the Music is officially a go. And despite any misgivings, that’s excellent news.

According to The Hollywood Reporter, Bill & Ted Face the Music is currently in preproduction. Keanu Reeves and Alex Winter are reportedly set to reprise their roles of Ted “Theodore” Logan and Bill S. Preston Esq. Dean Parisot (Galaxy Quest) will direct the picture and work from a script by creators Chris Matheson and Ed Solomon.

The THR report says the story:

“[W]ill see the duo long past their days as time-traveling teenagers and now weighed down by middle age and the responsibilities of family. They’ve written thousands of tunes, but they have yet to write a good one, much less the greatest song ever written. With the fabric of time and space tearing around them, a visitor from the future warns our heroes that only their song can save life as we know it. Out of luck and fresh out of inspiration, Bill and Ted set out on a time travel adventure to seek the song that will set their world right and bring harmony in the universe as we know it. Together with the aid of their daughters, a new crop of historical figures, and some sympathetic music legends, they find much, much more than just a song.”

Both Reeves and Winter have been talking about Bill & Ted 3 for a long time, though chatter has picked up over the last few years. Again, I never thought it would actually materialize, but then there was that EW article a few months back (and photo of the two stars together in a phone booth that gave me all the feelings) that made this seem like a real possibility. And here we are.

I’m skeptical by nature, but I have to admit this excites me. Everyone involved seems legitimately stoked, and the originals had a bigger impact on my formative years than I should probably admit in a public forum. Basically, it just gives me the warm and fuzzies all over.

There’s no word on when Bill & Ted Face the Music will get rolling. Keanu Reeves is currently shooting John Wick 3, and next year marks the 30th anniversary of Excellent Adventure, so…Wyld Stallyns Rule!
Posted by Brent McKnight at 9:58 AM