Yorgos Lanthimos' 'The Favourite' Trailer Has Bullets, Blood, And Bodices 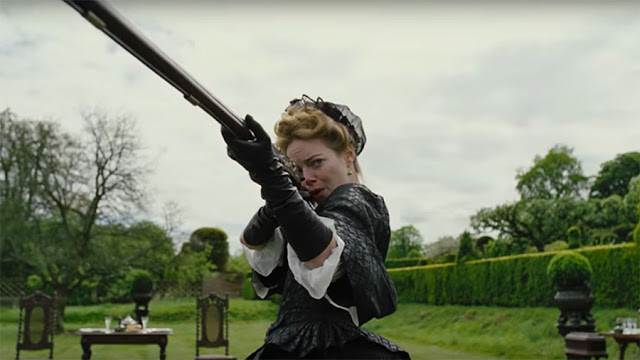 For his follow up to The Lobster and The Killing of a Sacred Deer, Yorgos Lanthimos is taking on an 18th century British period piece. And as you can imagine, being a Yorgos Lanthimos film and all, The Favourite isn’t exactly what you expect from this set up. I don’t entirely know what I’m watching with this new trailer, but I love it and can’t wait to see more.

There’s a lot to unpack in this trailer for The Favourite. It has an absurdist flair, richly detailed period costumes and settings, madness, bullets, blood, bodices, and so much more. Lanthimos has a penchant for twisting and subverting what looks, at least on the surface, perfectly normal. This looks wild and unhinged, more than a little violent, and overflowing with interest and intrigue.

Early 18th century. England is at war with the French. Nevertheless, duck racing and pineapple eating are thriving. A frail Queen Anne (Olivia Colman) occupies the throne and her close friend Lady Sarah (Rachel Weisz) governs the country in her stead while tending to Anne’s ill health and mercurial temper. When a new servant Abigail (Emma Stone) arrives, her charm endears her to Sarah. Sarah takes Abigail under her wing and Abigail sees a chance at a return to her aristocratic roots. As the politics of war become quite time consuming for Sarah, Abigail steps into the breach to fill in as the Queen’s companion. Their burgeoning friendship gives her a chance to fulfil her ambitions and she will not let woman, man, politics or rabbit stand in her way.

Again, that doesn’t sound too far from the norm, but what we see in the trailer is more than enough to inform us The Favourite isn’t so simple. It’s like Lanthimos took this description of a pastoral tale of the gentry, held it up to a warped fun-house mirror, and this movie is the result. And I’m here for it.

And, of course, Lanthimos has assembled a stellar cast. Fronted by Olivia Colman, Rachel Weisz, and Emma Stone, it also includes Mark Gatiss and Nicholas Hoult. The Favourite opens November 23, just in time for the end-of-year awards push, and I’m willing to bet Fox Searchlight has significant hopes in that regard.

Posted by Brent McKnight at 8:36 AM