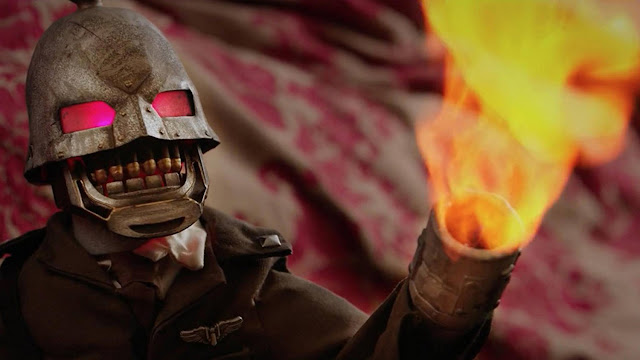 Horror hounds know there are roughly one billion Puppet Master movies. Okay, only 13, but still, it’s a bunch and many of them are…let’s stay strictly for the hardcore. We’re talking cheap, DTV offerings of varying quality. So, it may seem strange, in 2018, to be super pumped up for a movie like Puppet Master: The Littlest Reich. But it’s got such manic, over-the-top buzz from sources I trust in these matters, and sounds so bat-shit crazy, I find myself crazy jacked up for this particular slice of mayhem. And by the look of this trailer, my enthusiasm is wholly justified.

I won’t say Puppet Master: The Littlest Reich looks like a “good” movie in a traditional sense. Like, I wouldn’t suggest it to my parents. However, it does look like a great movie in all the ways I want a movie like this to be completely unhinged and insane.

It also has a suitably bonkers horror cast that includes Thomas Lennon, Michael Pare, Barbara Crampton, Udo Kier, and a bunch of other fun faces. Oh, and S. Craig Zahler, who penned the slices of cinematic brutality that are Bone Tomahawk and Brawl in Cell Block 99, wrote the script, so you just know it’s going to get rough and bloody.

Here’s a brief synopsis that lets us know everything we need to know, which is evil puppets come to life, apparently thanks to a Nazi this time, and run amok:

All hell breaks loose when a strange force animates the puppets up for auction at a convention, setting them on a bloody killing spree that's motivated by an evil as old as time.

If that doesn’t get you jacked up for The Littlest Reich, I will quote this review from Birth.Movies.Death.:

"Puppet Master: The Littlest Reich isn't a movie. It's a Gallagher-style comedic routine. Only instead of watermelons being smashed, bodies are punctured, mangled, and eviscerated, all while its creators jokingly glare at the audience, eyebrows raised and waiting for you to crack.

So, there you have it. Puppet Master: The Littlest Reich opens in a limited number of theaters and on VOD on August 17. Plan accordingly.
Posted by Brent McKnight at 8:34 AM