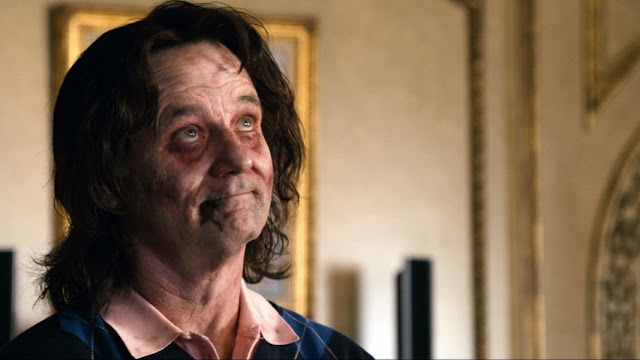 Indie auteur Jim Jarmusch isn’t usually associated with horror. Sure, he made a vampire movie with Only Lovers LeftAlive, which I love, but it is, as expected, an artsy, existential love story that just happens to feature immortal, blood-sucking rockers. But apparently he has a secret zombie film on the way called The Dead Don’t Die, and it stars Bill Murray, Adam Driver, Chloe Sevigny, and Selena Gomez.

The Film Stage reports the Paterson director is dipping back into the horror pond and that The Dead Don’t Die is currently filming in upstate New York. They note that both Just Jared and The Daily Mail have captured set photos. The pics include Selena Gomez in Daisy Dukes and covered blood, and Driver, Murray, and Sevigny dressed as cops, among other goodies.

It make sense that Bill Murray plays a cop. Earlier this year, he told Philly:

“I’ve got a good job coming up. Brace yourself: It’s a zombie movie. Jim Jarmusch has written a zombie script that’s so hilarious and it has a cast of great actors: Rosie Perez, Daniel Craig. It’s titled The Dead Don’t Die, and it shoots over the summer. But, no, I will not play a zombie.”

That’s really all we know about The Dead Don’t Die at this point. It’s a comedy and Murray plays a cop, not a zombie. I’m willing to bet it’s not your average comedy, however. Though he mentions Daniel Craig and Rosie Perez, neither has been seen on set, but that doesn’t mean anything. Maybe they’re not needed yet. And who among us would be shocked to see the casting of a movie change? That never happens.

Like I said, Jim Jarmusch isn’t widely known for his horror work, but Only Lovers is such a fantastic, dreamy, unique take on the genre, that you have to imagine he has something interesting in store. I can’t wait to see what he has planned for his first foray into the zombie realm. I’m excited for that, but hell, I’m also excited that we’re getting a new Jim Jarmusch movie. That alone is a good deal, the fact that it’s a horror film only makes this project that much more interesting.

There’s no word when The Dead Don’t Die might arrive. In fact, there’s been no official announcement about it at all. This is all pieced together intel. My guess is it’ll debut at a big prestige film festival sometime next year.
Posted by Brent McKnight at 8:41 AM