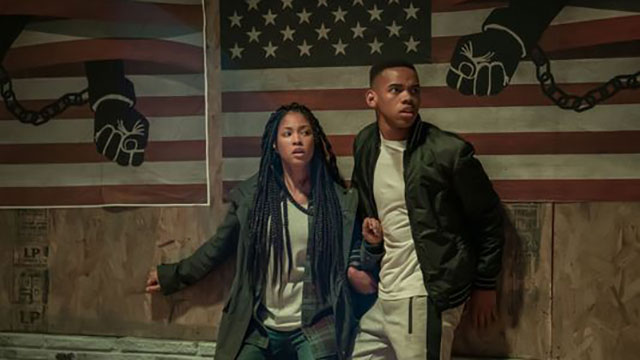 When The First Purge, the latest in Blumhouse’s saga of a future where all crime is legal for one night, sticks to the horror elements that drive the franchise, it’s often quite effective. In short bursts, it taps an underlying sense of dread and evokes a visceral, gut-level terror. When the protagonists stumble their way through dark streets, pursued by gangs of giddily murderous revelers draped in eerie masks, it’s tense and scary and raw. The framework around these moments, however, doesn’t always support the weight.

It’s crazy to think that what began as a low-budget, home invasion horror yarn about scared rich white people has evolved into a fist-in-the-air battle cry of a franchise with racial politics at the forefront. Many of the cheap, grindhouse movies of the 1970s that The Purge emulates contain bit of social commentary buried beneath the shlock and sleaze, and this series has taken that and sprinted ahead. It’s clunky and heavy-handed and the least subtle movie I’ve ever seen, but damn, I’m kind of here for it. 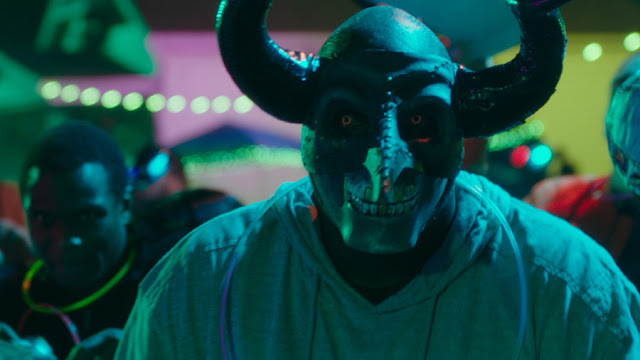 By now, we know the premise: one night a year is set aside for the American people to get our collective yah-yahs out by murdering each other free from consequence. The premise is inherently ridiculous, but now we get a prequel to see how it all began. Sort of. The script from founding father James DeMonaco, who hands the directing duties to Burning Sands helmer Gerard McMurray, doesn’t dig into the whys. That’s all handled by an early montage of news clips that amounts to, we’re fucked, there’s widespread social unrest, and we elect the New Founding Fathers of America, a new, ultra-right wing party to power. It’s probably best they don’t dwell, because the whole idea behind the Purge is, let’s just say flawed.

The plot basically splits into two threads. There’s the government side, where pasty, white, suit-wearing MAGA-ites watch from the safety of a secure control room and Marisa Tomei plays the dumbest “scientist” ever put to film. These scenes become groan inducing and the characters are little more than finger-tenting villains who spout laughable platitudes about how this will benefit all mankind. Every time we go here, the momentum stops and movie becomes much less interesting and propulsive. 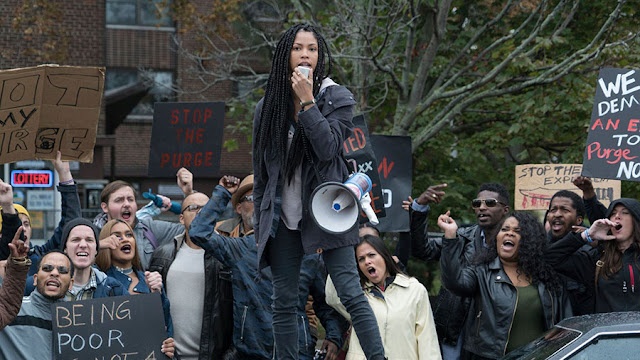 The bulk of The First Purge, and where the truly focus lies, is on the residents of Staten Island, selected as the location of this “social experiment.” This side of the story is entirely black, brown, and poor people, with an emphasis on social activist Nya (Lex Scott Davis); Isaiah (Joivan Wade), her younger brother who’s sick of living in their rundown housing project; and Dmitri (Y’lan Noel), Nya’s ex and a local drug kingpin. It may startle you to learn that the NFFA are up to no good, put their finger on the scale so to speak, and all of this is a ploy to exterminate the poor and people of color. I’m shocked at this turn of events, I tell you, shocked!

It’s rare to see a movie fronted almost entirely by people of color—in the Staten scenes, the only white faces are a group of racist bikers, Klansmen, and assorted militia members, mercenaries, and goons. There’s certainly every over-the-top stereotype to be found—sassy neighbor, Delores (Mugga); a gangbanger named 7&7; and an insane, cackling crackhead, Skeletor (Rotimi Paul), who just wants to hit the pipe and Purge his brains out—but the central characters, specifically Nya and Dmitri, are engrossing and make for a compelling watch. And even with the broad, flat types, there’s still way more depth and spectrum of representation than in something like, say, Sicario: Day of the Soldado. 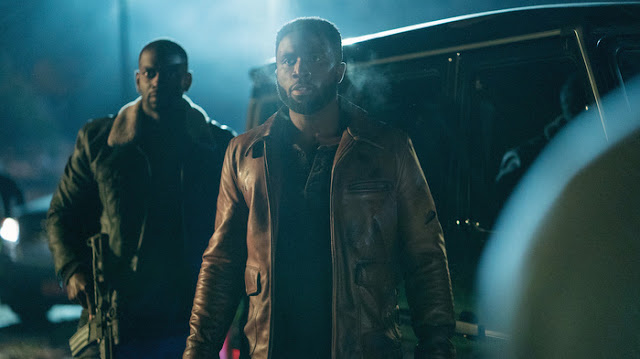 Davis infuses Nya with a palpable desperation and anger and desire to protect her brother, but also an earnest desire to enact larger change for everyone. Starting from the same place, Dmitri offers an alternate path, a drug dealer who begins the movie out to grab what he can and protect his empire. Isaiah stands at a crossroads, both sides pulling at him.

After this, I’m all for Y’lan Noel becoming a big action star. He has charisma that grabs your immediate attention and the most action-heavy beats belong wholly to him—I keep thinking Passenger 57 era Wesley Snipes, he has a similar physicality and wry smile. A gritty, “one shot” fight stands out both because of his fight chops and as the single most attention grabbing scene. 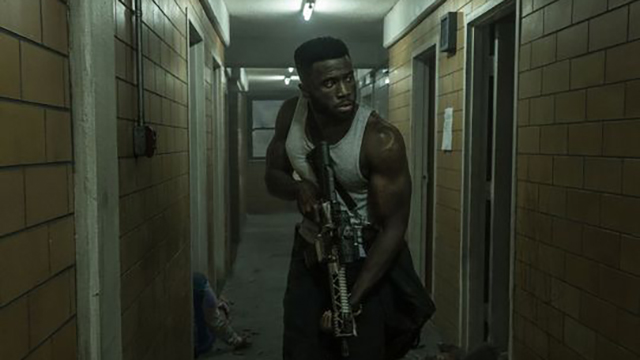 But again, it’s when McMurray takes to the streets and goes full-horror that the movie delivers most. The reasons why the characters are out there may be contrived as all hell, but in the moment, The First Purge produces white-knuckle tension, unsettling visuals, and escalating terror in an effective way. This doesn’t always carry through, but bouts of danger and pressure pepper the narrative and keep things interesting.

The First Purge jump ropes the line between social commentary and savage, gratuitous violence. It wants to have greater point while also wallowing in the muck, and sometimes it works, sometimes not so much. Scenes echo Charlottesville and there’s one quick, but teeth-gritting police brutality moment that’s, uh, questionable. 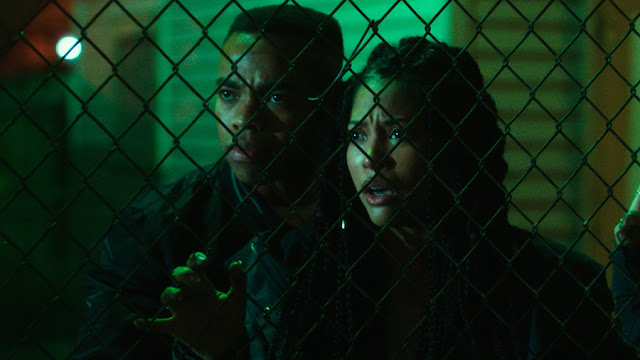 The very first poster for this movie was a white background with a Trumpian red hat emblazoned with the title. I don’t think anyone expected nuanced discourse on race, class, and the current state of America. But while it seethes with righteous anger, and what it says need saying, the delivery mechanism is clunky and ham-fisted, flying its flag high and bold. From the initial contained home invasion, to grindhouse gearhead car flick, to ludicrous exploitation with a social conscience, this franchise has endured a fascinating if unexpected transition.

The First Purge doesn’t always hit its marks, and it’s wildly up and down. But engaging leads, moments of raw tension and terror, and something to chew on, push the franchise ahead even while it looks back to the beginning. [Grade: B-]

Random thought I had during this screening: I bet Mike Pence would Purge. (Trump would hole up somewhere and Tweet about all the fine people involved, and we all know Paul Ryan has hunted people on a private Island somewhere “Most Dangerous Game” style.)

Posted by Brent McKnight at 1:34 PM