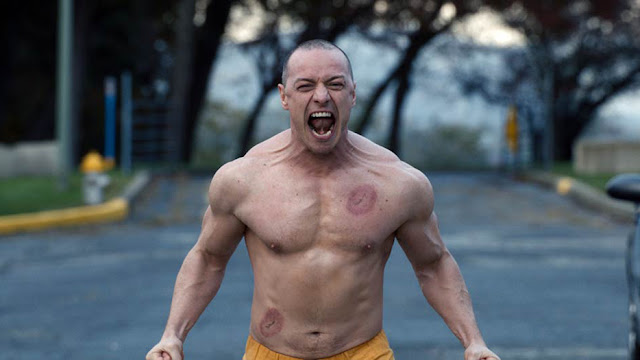 I was out of town all weekend, nothing interesting happened in the realm of movies or general pop culture, right? Oh wait, San Diego Comic-Con went down, so the studios unveiled a glut of new shiny new promotional material for their upcoming slates of major motion pictures. (You know, because Comic-Con is all about movie not actual comics.) As usual, there’s a ton of stuff to sift through, but because this isn’t my day job anymore, I’m only going to focus on the ones that I find particularly interesting or that appeal to my peculiar sensibilities: Godzilla: King of the Monsters, Aquaman, Glass, and Shazam!

Check out all of the trailers below.

First up, we’ve got Godzilla: King of the Monsters, which, fuck yeah. I like the previous installment more than many people, but it’s far from a great movie, and lacks a certain titular kaiju. I’m absolutely certain this falls into the same trap of having shallow, crappy, pointless human characters, but holy hell, the monsters. We spy Godzilla himself, Mothra, King Ghidorah, and Rodan. I’m a man of simple tastes, give me giant monsters and I’m generally a happy camper.

Following the global success of “Godzilla” and “Kong: Skull Island” comes the next chapter in Warner Bros. Pictures’ and Legendary Pictures’ cinematic MonsterVerse, an epic action adventure that pits Godzilla against some of the most popular monsters in pop culture history. The new story follows the heroic efforts of the crypto-zoological agency Monarch as its members face off against a battery of god-sized monsters, including the mighty Godzilla, who collides with Mothra, Rodan, and his ultimate nemesis, the three-headed King Ghidorah. When these ancient super-species—thought to be mere myths—rise again, they all vie for supremacy, leaving humanity’s very existence hanging in the balance.

Next on the chopping block: DC’s Aquaman. I’m not a huge fan of the character, but I admit I dig Jason Momoa’s cheesy bro, I’m-channeling-James-Hetfield interpretation of the character. And I trust James Wan to deliver big popcorn fun and this trailer looks ridiculous and bonkers and actually pretty damn entertaining. Big, crazy fish times? Sold.

From Warner Bros. Pictures and director James Wan comes an action-packed adventure that spans the vast, visually breathtaking underwater world of the seven seas, “Aquaman,” starring Jason Momoa in the title role. The film reveals the origin story of half-human, half-Atlantean Arthur Curry and takes him on the journey of his lifetime—one that will not only force him to face who he really is, but to discover if he is worthy of who he was born to be…a king.

M. Night Shyamalan’s Glass is the one I’m most curious about. I like his last effort, Split, and I like Unbreakable, but the crossover always felt forced to me. That said, this trailer looks pretty rad and I like the idea of these real-world superheroes/villains. It’s an interesting, unique take on the genre that offers a nice counterpoint to the mammoth, GCI spectacle blockbusters we usually see in this realm. And honestly, I’m game because it’ll be nice to see Bruce Willis actually give a shit on scree again. It’s been a minute.

From Unbreakable, Bruce Willis returns as David Dunn as does Samuel L. Jackson as Elijah Price, known also by his pseudonym Mr. Glass. Joining from Split are James McAvoy, reprising his role as Kevin Wendell Crumb and the multiple identities who reside within, and Anya Taylor-Joy as Casey Cooke, the only captive to survive an encounter with The Beast.

Following the conclusion of Split, Glass finds Dunn pursuing Crumb’s superhuman figure of The Beast in a series of escalating encounters, while the shadowy presence of Price emerges as an orchestrator who holds secrets critical to both men.

And finally, Shazam!. Admittedly, I haven’t ever really cared about Shazam!. I watched both the live-action and animated versions as a kid, but it was never a character that interested me. That said, this kid-gets-superpowers take looks fun. And if there’s anything more substantial than that, awesome.

My curiosity is piqued, however, when it comes to seeing how this fits into the larger DC Extended Universe. It’s very blatantly tagged as a DC product, though the tone is drastically different from the other installments. And Warner Bros. is also using New Line Cinema, which is an intriguing move. For now, it looks like they’re keeping it separate, but if it hits big, the possibility of inclusion and brining him into the fold is still there.

Guess what comes next:

We all have a superhero inside us, it just takes a bit of magic to bring it out. In Billy Batson’s (Asher Angel) case, by shouting out one word—SHAZAM!—this streetwise 14-year-old foster kid can turn into the adult Super Hero Shazam (Zachary Levi), courtesy of an ancient wizard. Still a kid at heart—inside a ripped, godlike body—Shazam revels in this adult version of himself by doing what any teen would do with superpowers: have fun with them! Can he fly? Does he have X-ray vision? Can he shoot lightning out of his hands? Can he skip his social studies test? Shazam sets out to test the limits of his abilities with the joyful recklessness of a child. But he’ll need to master these powers quickly in order to fight the deadly forces of evil controlled by Dr. Thaddeus Sivana (Mark Strong).