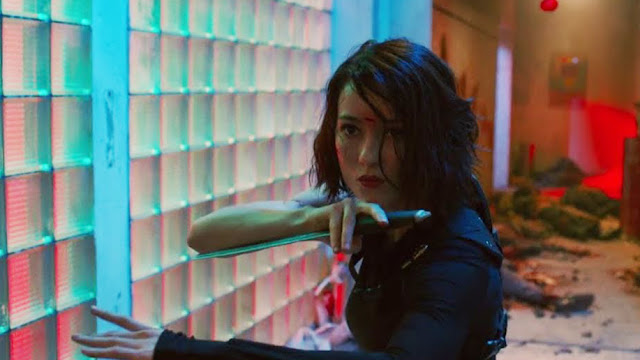 Timo Tjahjanto’s The Night Comes for Us is the most brutal, punishing action movie probably since his last outing, Headshot (with Kimo Stamboel), or the Raid movies. I’ve never recoiled and spontaneously yelled, “Oh damn,” watching a movie so many times in my life. It’s great and on Netflix and you should watch it if you haven’t.

I think more of the story than a lot of people, but that’s a discussion for another time and place. It hints and nods at a much larger criminal world, almost like John Wick, and one of the biggest mysteries is the true nature of Julie Estelle’s character, known only as The Operator. She shows up, kicks all kinds of ass, and helps Joe Taslim’s protagonist Ito out of some sticky situations. But the question remains, who does she work for, why does she help Ito, and what’s her general deal? A lengthy new deleted scene sheds some light on the matter.

Tjahjanto tweeted out this deleted scene, due to popular demand as he says. It’s interesting, for sure, but it’s also easy to see why they cut it out. A bit long and slow, it leans heavily on expository dialogue. Overall, it probably would have dragged the breakneck pace down, and in the end, I like the sense of secrecy and obscurity it leaves. This allows the audience to speculate and wonder and I can dig that strategy.

For the hopeful, this clip doesn’t offer a ton of answers. In fact, it probably poses more questions than anything else. What we do learn, however, is that she works for someone, yet another in a line of shadowy entities clashing in the criminal underworld. She has a definite mission, to take out Ito, and though she’s never failed, something about this job gets under her skin and pushes her off track. At times, it sounds like she’s a straight up mercenary, but whoever she works for also has it out for the Six Seas, or perhaps she has a personal vendetta, so her specific motivations remain murky. There are also hints that they have something on her, which is how they maintain control—and can’t you just imagine a scenario where she turns and goes after them? [Giggle.]

One last thing, I love when she lovingly strokes that massive machine gun in the case. Her blind handler says, “Is that necessary?” Which is the biggest question of the whole film: is any of this necessary? Probably not, but it is certainly awesome. That’s enough for me. Her response, “Maybe next time,” also makes me giddy with the possibilities. Tjahjanto has said he hopes this kicks off a trilogy, so we might yet see what havoc The Operator can wreak.

Anyway, The Night Comes for Us rules hard. Watch it if you haven’t, watch it again if you have. We have to justify the budget for two more movies.
Posted by Brent McKnight at 8:34 AM

Julie Estelle's character, #theOperator, is phenomenal. #JulieEstelle, and the shadowy premise of this persona, is impressive to behold. From the way she smiles and whips her hair around, to her light and unique tactical attire, to her wide range of weapons mastery and unparalleled martial arts skill, Julie Estelle is a breathtaking force of nature... a seriously lethal, #FemmeFatale !!