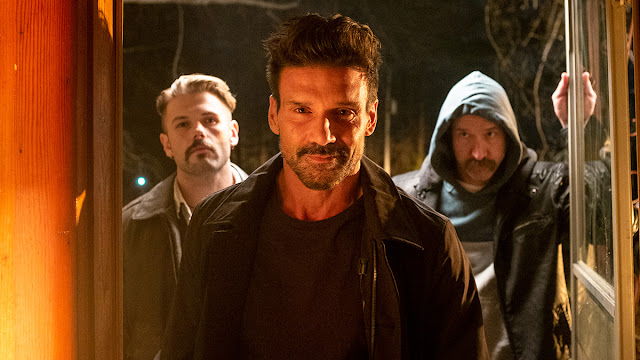 Sometimes, on paper, a movie has all the ingredients necessary for success, but for one reason or another—or many—just doesn’t work. Such is the case with writer/director Aaron Harvey’s Into the Ashes. It contains most of my favorite cinematic things—Frank Grillo, violence, a grim revenge tale—but other issues bog down the film and, it brings me no pleasure to report, it simply isn’t very good.

With a bleak, gritty feel, Into the Ashes sets up like a modern western about a retired outlaw who has hung up his guns, found a new purpose, and moved on to better things, only for his past to catch up with him. In this instance, we’re talking about Nick Brenner (Luke Grimes). He’s married to the too-good-for him Tara (Marguerite Moreau), they are very, very—as the script takes repeated pains to demonstrate—in love, and things are hunky dory. Until his ex-partner-in-crime, Sloan (Grillo), gets out of jail and Nick’s former crew comes looking to settle an old score. 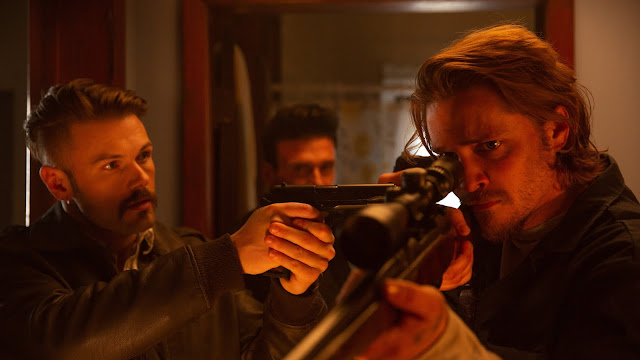 Perhaps not a particularly original set up, it’s serviceable and more than adequate for this kind of story, one that aims to plumb the depths of the human soul and poke around in moral grey areas. Harvey has a solid grip on the tone and feel—set in a hardscrabble, blue-collar town, the film knows these characters and lives in the setting. Working with cinematographer John W. Rutland, mechanically the film looks fantastic, and from a craft level, things are dandy.

Though he doesn’t get a ton of screen time, Grillo stands out, playing the quiet, grizzled criminal, a rage simmering just below the surface, always on the verge of boiling over. It’s not much of a stretch—we’ve seen him do this so, so many times—but it’s something he does better than anyone else working today. Grimes is strong as the reformed desperado who just wants to keep his head down. And James Badge Dale, as Nick’s redneck drinking/hunting buddy, Sal, manages to inject both humor and pathos into his role.

[Read More: This 'Hold the Dark' Trailer is Unbearably Tense] 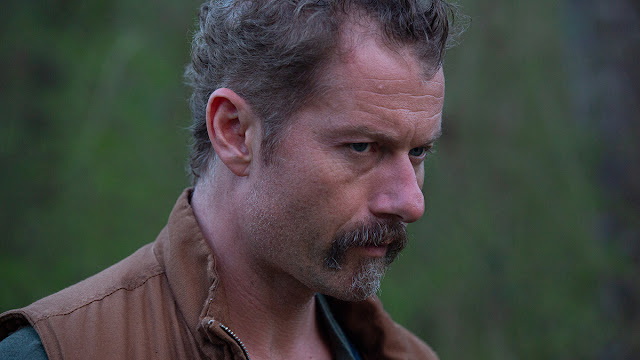 Into the Ashes has the pieces in place, but the script doesn’t know what to do with them, and that’s where the problems lie. The pacing and structure are off, it mistakes slow for deliberate, it attempts some jarring late-in-the-game narrative time-gymnastics, and tries to tie the whole thing up with a tacked-on philosophical bow.

Tara, and subsequently Moreau, exists solely to be harmed in a way that motivates the male character—not unexpected, this is a tough-guy movie about tough guys being tough, but it feels cheap and too easy. The film tries to frame Nick as being reluctantly pulled back into his old life, but never shows him struggle or wrestle with those feelings—when the time comes, there’s not a second of hesitation or deliberation. Tara’s Sheriff father, Frank (Robert Taylor), is primarily there to spout grizzled old-timer clichés at Nick, like, “I told you to stay away from my daughter” and “I knew exactly what you were.” 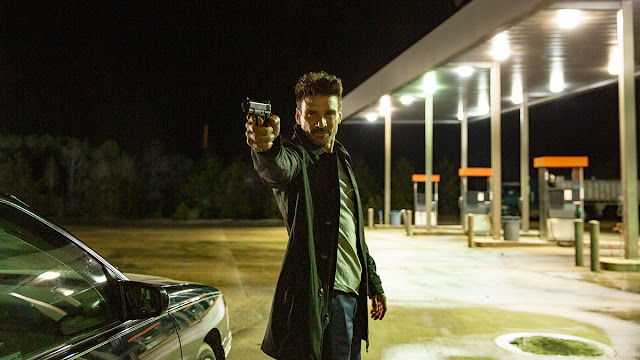 Intended as a slow-burn, all too often Into the Ashes is just plain slow—it doesn’t enhance the tension, the pace simply crawls along. The inciting incident doesn’t happen until nearly 40 minutes into the movie. In the meantime, the script spends a lot of energy driving home how idyllic and perfect and in love Nick and Tara are—we see it, we see it again, Nick and Sal talk about how perfect it is, and so on. And even once the wheels turn, they don’t move with much forward force.

The script somehow tries to do everything—it’s weirdly convoluted, but still rings empty. There’s the betrayal and hurt between Nick and his old crew—which offers an intriguing thread that’s never explored. Nick has drama with his father-in-law, as well as friction between Tara and her dad, all of which is just hinted at or plays out in muttered insults. Sal has his own stuff going on, Nick gets shot and left for dead, there’s a goofy deputy, and on and on. 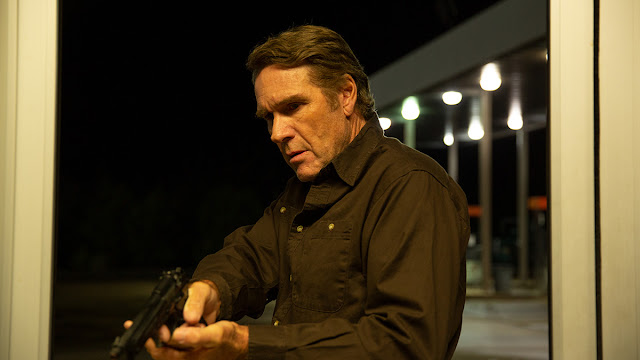 Then there’s the most curious choice. A decision at precisely the two-thirds point, at the exact moment where the pace finally builds consistent velocity and finally feels like it’s all coming together, to completely cut away and change everything. Up to then, the movie sticks almost exclusively with Nick—the exception is a few early scenes that do little more than briefly introduce characters. But right as the narrative comes to a head, when the violence is ready to explode and the climax looms, the film jumps away from Nick and into Frank’s point of view. Whatever urgency, drive, and tension it had, evaporates. Completely. And it stops dead in the water.

I understand the impulse and what the script wants to do, but it does not work. At all. It tries to play with time, to inject some non-linier trickery. What happens is, with Nick and Sal, shit’s about to hit the fan. Instead of watching that play out, however, we see Frank stumble upon the bloody aftermath and piece together what happened. It’s a tried-and-true narrative technique, one that often yields positive results.

[Read More: 'The Raid' Remake is Apparently Back on with Joe Carnahan and Frank Grillo] 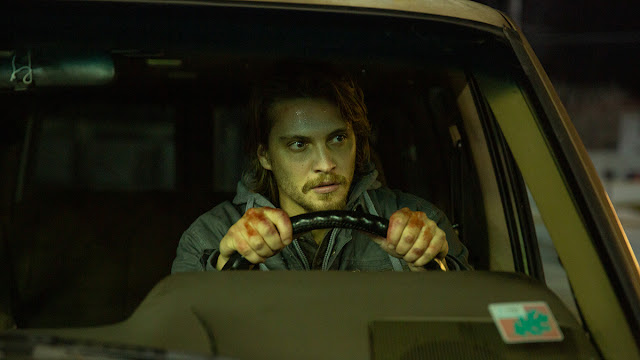 Problem is, here it’s out of place, unearned, and clashes with the straight-forward construction of the film up to this point. This move pulls the rug out from beneath the rest of the movie. Frank’s not particularly interesting or insightful, and his cursory investigation adds nothing. Not to mention only ten minutes later, after he bumbles through a few scenes picking up pieces of the story, the film leaps back in time to show the climactic battle. The script builds to the climax only to leave at the exact wrong moment in an ill-advised detour.

It’s easy to pin the blame for the construction and pacing issues on the script, but that’s not always fair. It’s impossible to know what went on behind the scenes, and, as a filmmaker friend once told me, especially with an independent production, sometimes you just don’t have it and have to work with what’s in front of you. That said, there are issues that could be fixed with what’s on hand. There’s streamlining that could have been done and room for more nuance and character development than what’s given. 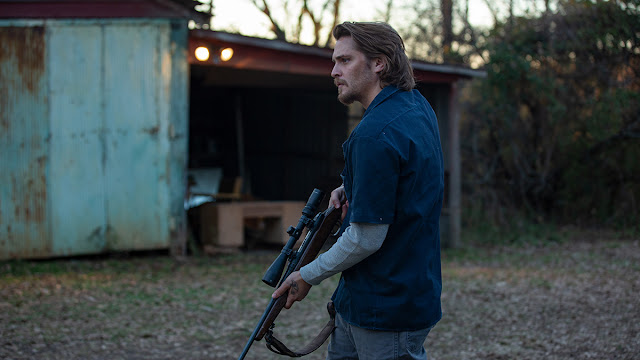 There’s definite potential on display in Into the Ashes. Aaron Harvey has a strong grasp on the tone, mood, and aesthetics, and gets good performances, especially from Grillo, Grimes, and Dale. As a whole, and despite certain positives, the movie has too many problems to overcome, and despite promise, doesn’t work. But with this calling card, I’m definitely curious to keep an eye on Harvey and see what he does next.