'Gunpowder Milkshake' Trailer: Karen Gillan Teams Up With A Crazy Cast For Action And Revenge 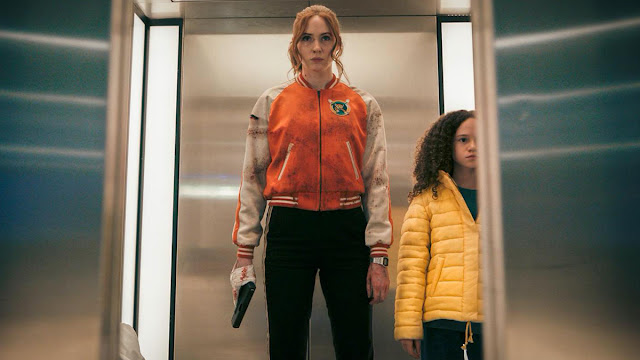 Crazy action, a stacked cast, revenge, a long-lost parent…yeah, I’m in. If any of that sounds good to you, you’ll probably want to check out this trailer for Netflix’s upcoming Gunpowder Milkshake, which has all of that and more.Gunpowder Milkshake has already been called a female John Wick and this trailer doesn’t do much to dispel that. There are some obvious similarities—over-the-top violence, an underground world of assassins with its own institutions and currency, the overly stylized color palate, among others.

But there are much worse things to mimic, and while there are parallels, this also has a great deal to set it apart. First off, there’s that bonkers cast fronted by Karen Gillan, but that includes Lena Headey, Michelle Yeoh, Angela Bassett, Carla Gugino, Paul Giamatti, and more. Director Navot Papushado also helmed Big Bad Wolves, which you should see if you haven’t. And the whole things looks and sounds like a blast.

Sam (KAREN GILLAN) was only 12 years old when her mother Scarlet (LENA HEADEY), an elite assassin, was forced to abandon her. Sam was raised by The Firm, the ruthless crime syndicate her mother worked for. Now, 15 years later, Sam has followed in her mother’s footsteps and grown into a fierce hit-woman.

But when a high-risk job goes wrong, Sam must choose between serving The Firm and protecting the life of an innocent 8-year-old girl - Emily (CHLOE COLEMAN). With a target on her back, Sam has only one chance to survive: Reunite with her mother and her lethal associates, The Librarians (MICHELLE YEOH, ANGELA BASSETT and CARLA GUGINO).

These three generations of women must now learn to trust each other, stand up to The Firm and their army of henchmen, and raise hell against those who could take everything from them.

Netflix drops Gunpowder Milkshake on July 14, when it will surely be the talk of the town for like a week before it disappears into their content mine forever. Still, should be a hell of a week.

Posted by Brent McKnight at 7:00 AM