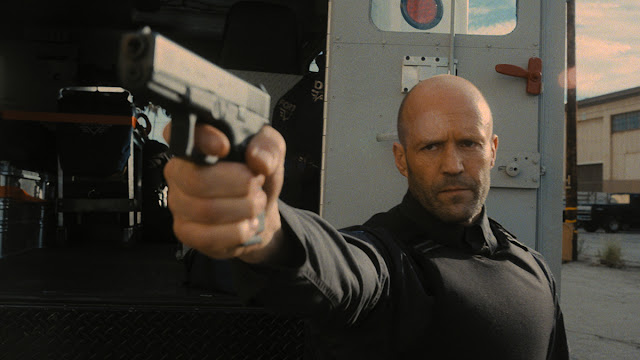 Guy Ritchie’s bank robbery actioner, Wrath of Man, has a protagonist named H (Jason Statham) and supporting players named things like Bullet (Holt McCallany), Sticky John, and Boy Sweat Dave (Josh Hartnett). It aims at being biblical in its execution of one man’s revenge. It’s stocked exclusively with vile, reprehensible, mean-spirited characters. And it’s so overwrought and overblown it watches like a caricature of the shitty Heat knock off it wants to be. So, in short, while a messy, it’s also kind of fun, unintentionally so most of the time. It’s a real mixed bag.

This is a movie that, in all seriousness, includes moments like Jason Statham telling Post Malone to suck his own dick before shooting him. To the aforementioned Boy Sweat Dave, he says, “Dave, you just worry about putting your asshole back in your asshole and leave this to me,” before getting in a shootout. All, of course, growled out in his trademark Cockney accent and tough guy swagger. 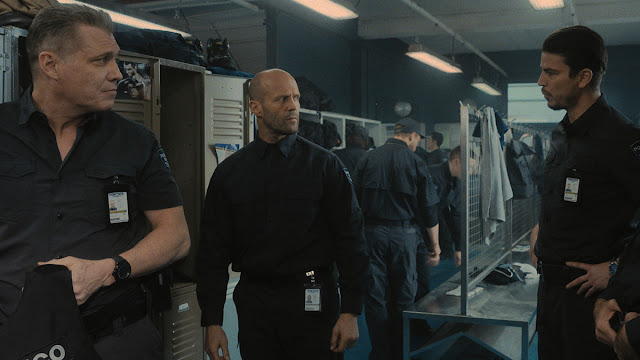 The film begins with H, he of the shadowy past, getting a job as an armored truck driver. Who knows why anyone hires this particular company, because they are always, always being robbed. As Wrath of Manunfurls, H’s motivations become clear, rival crews of bank robbers face off with one another, and shit goes down. Most of all, however, the hyper-masculine characters (there’s one female character with any significant lines and her fate is…not awesome) lob homophobic zingers back and forth with the speed of a fast-paced ping pong match. They may as well be yelling, “I’m gay? No, you’re gay! Take that!” in an endless loop.

Like many other Ritchie movies, this owes a great structural debt to Pulp Fiction. The plot leaps around in time, showing the same event from multiple perspectives, attempting to create painfully obvious a-ha moments for the viewer. Detailed, largely unnecessary backstories push to the forefront. We get another Ritchie special, as one crook, Jackson (Jeffrey Donovan), explains the details of a particular heist as it happens. Not only is this a tired, washed-out ploy, they execute it in the clunkiest fashion. They’re all plays out of a familiar, well-read playbook. 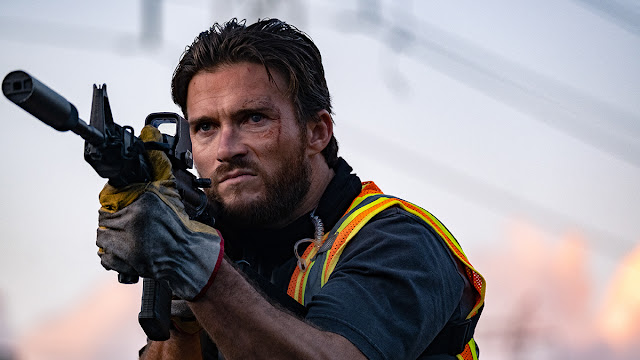 The script, also from Ritchie and frequent co-conspirators Ivan Atkinson and Marn Davies, adapting the 2004 French film Le Convoyeur (Cash Truck), thinks all of these affectations make it clever and sharp. But it’s all pretension and window dressing that shows exactly what it is—a film full of empty stylistics and nothing of any substance.

Statham does what the film asks of him, playing stone-faced to the umpteenth power. Whether blasting enemies, mourning a tragic loss, exacting vengeance, or ordering burritos, he wears an identical blank expression. That’s the character, that’s H, he’s a grim-faced badass. But it also means there’s zero emotional investment in anything happening on-screen. Everyone is despicable, but H is the one shot this movie has of presenting a compelling, or at the very least interesting character, only to whiff. On paper, this wants to be super deep and spiritual and awash in subtext, only to continually say the quiet part as loud as humanly possible. How many times can characters comment that H is some kind of dark spirit? A lot, the answer is a lot. 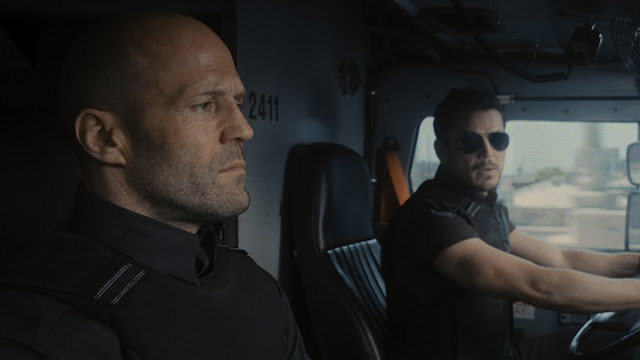 But you’re not here for subtlety and subtext, you’re here for action, you’re here to watch Jason Statham kick people in the face. Which he does. For a filmmaker closely identified with a near-frantic, hyperkinetic style, Ritchie stages the action in Wrath of Man in uncharacteristically straightforward fashion. Like the characters, this takes a cold, tactical approach to the various shootouts, robberies, and chases.

I have a weird array of feelings toward Wrath of Man. On one hand it’s a ham-fisted dullard of an action film that believes itself ever so clever. (It’s not.) On the other, it takes itself so seriously, so convinced of its own importance, that it’s kind of amusing. The action is solid; if nothing else, Ritchie’s film has that going for it. It’s dumb and empty and mean, and not particularly memorable, except for the odd flourishes that make moments stand out. (Again, I can’t stress enough that there’s a wholly inconsequential character named Boy Sweat Dave!) It’s somehow both a movie I’ll never forget and that I’ll never think of again. [Grade: C]

Posted by Brent McKnight at 3:00 PM