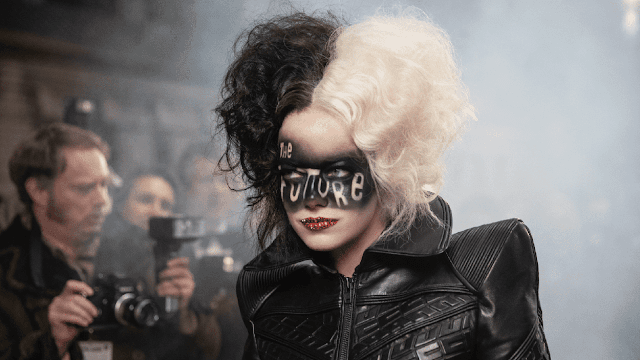 The first hour of Cruella, Disney’s latest attempt to retcon an iconic villain from one of their classic animated films into a sympathetic character, is actually pretty fun. Full of over-the-top costumes, elaborately staged heists, and adorable puppers, it’s a campy Goodfellas by way of The Favourite. (Favourite scribe Tony McNamara worked on the script, so that makes a great deal of sense.) It’s energetic, visually arresting, and, despite being completely unnecessary and awkwardly forced, does a marginal enough job of humanizing Cruella de Vil, the two-toned, dog-hating antagonist from 101 Dalmatians.

This early going, which is admittedly still a bit up and down, generally has a propulsive momentum and a compelling-if-familiar tale. From there, however, things devolve and Cruella becomes the generic origin story the project initially appeared to be. And like similar Mouse-House-backed films exploring the younger days of famous characters (read Solo), director Craig Gillespie (I, Tonya) and company attempt to reveal the basis of every last personality quirk and trait—how she acquired her surname may not be as nauseatingly stupid as how Han Solo came by his, but it’s close. 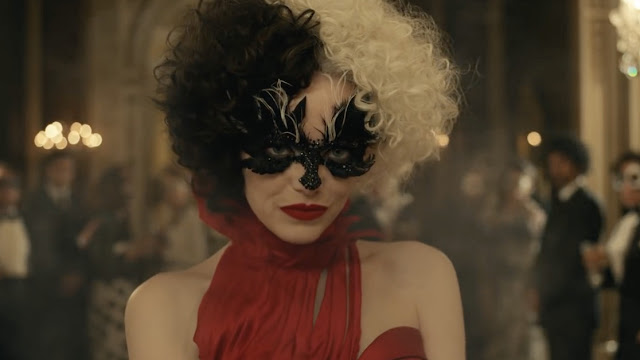 Set in the 1970s during the nascent stages of London punk, Emma Stone takes the title role. Left an orphan at a young age, she falls in with shifty roustabouts Jasper (Joel Fry) and Horace (Paul Walter Hauser), and the three form a type of pseudo-Dickensian crime family. All the while, she dreams of becoming a fashion designer, an opportunity that presents itself in the guise of The Baroness (Emma Thompson), the draconian head of the city’s most prestigious fashion house.

The Emmas Stone and Thompson are both excellent and the scenes they share, gleefully, viciously ripping into one another with thinly veiled barbs, are often catty gold. Along with this, the proto-family dynamic between Cruella and Jasper and Horace grounds the character and does most of the heavy lifting when it comes to making her a…maybe not-entirely-likeable figure, but at least not despicable to her core. And Fry and Hauser dig into the goofiness of their respective roles. The one true breakout star, however, is Winks, Horace’s one-eyed chihuahua, an integral component of many of their cons and who steals every scene. 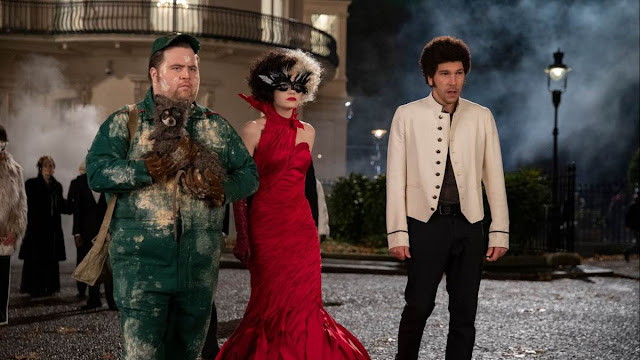 Then, at around the 58-minute mark, the film takes a dramatic turn, not for the better. From there it becomes a running narcissist-versus-narcissist battle of egos as Cruella launches a campaign to unseat the Baroness. On a dime, Cruella turns mean and spiteful, betrays the only friends she’s ever had, and gradually becomes the very thing she’s attempting to destroy. It’s simply much less compelling, much less clever, and that frenetic dynamism evaporates. Whereas it toed a definite line, beyond this point it topples and becomes insufferable rather than cheeky.

Cruella definitely sets the stage so the audience will root for the title character. Which creates a sensation of discomfort knowing where she winds up. For this character to win means she abandons every non-despicable element of who she is. We know she becomes a tyrant, a hateful witch who tries to murder a bunch of puppies and treats Horace and Jasper, the only family she has, as dirt, as nothing more than idiot henchmen. It’d be one thing if the film lets her fully descend into her wickedness, but throughout it tries to have it both ways, portraying her as capable of being nasty and venomous but also setting her up for redemption. The internal battle between her two selves never fully develops, and the film never takes a stance, leaving her wishy-washy and indistinct. 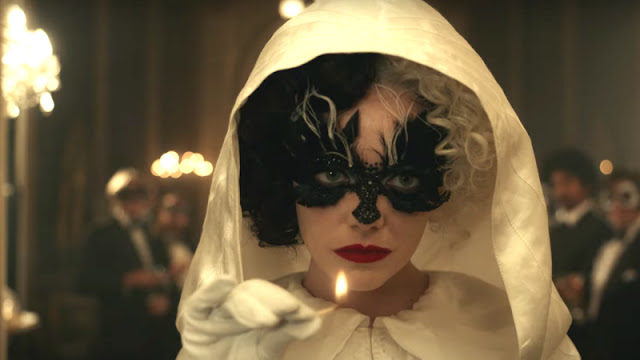 For all of its other flaws, this is a nice film to look at. Gillespie and cinematographer Nicolas Karakatsanis (Bullhead) use expansive set pieces and stage wide-open shots. At a fabulous gala, multiple actions unfold around the frame, moving parts in every corner. They bring a similar grandiose vibe to less ostentatious scenarios, too, like the spacious design floor of the Baroness’ factory, with depth and layers and intricate choreography melding together. 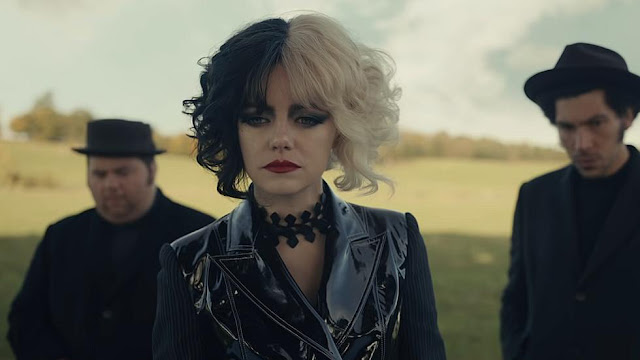 The makeup and costumes are fantastic, in every sense of the word. Jenny Beavan’s extravagant frocks manage to be both era-appropriate and as completely bonkers as they need to be to sell what the film is after. Every one of Cruella’s creations are bold and brash, outlandish and fierce, from the more functional to the completely bizarre—like a gown made out of trash that pours from the back of a dump truck. Just give them all the awards for this category right now and call it good.

But in the end, it’s all window-dressing. Cruella is a dog with a big bark and no teeth to back up its snarl. Overlong at 134-minutes—and overlong in strange places—the film continually undercuts any earnest emotion in favor of hollow bombast and affectation. Never as crafty or subversive at it wants to be, it’s fun for a time, but wears thin in short order. [Grade: C/C+]