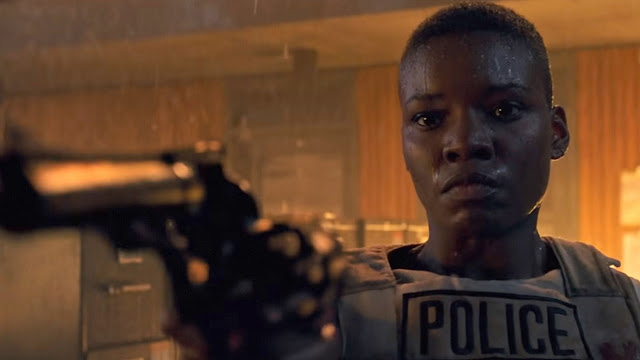 Directed by Joe Carnahan (The Grey) and fronted by Gerard Butler (Den of Thieves) and Frank Grillo (The Purge: Anarchy), it’s easy to envision what a movie titled Copshop is likely to deliver. If you expect and hope for a violent, irreverent slice of tough-guy action thriller, you will not be disappointed.

On the run from some very dangerous people, Teddy Murretto (Grillo) devises what he thinks is a clever way to duck out of harm’s way: he punches a cop. Tossed in a small-town lock up, he believes he’s safe, that is until notorious hitman Bob Viddick (Butler) shows up, having also found a way into this particular jail. As it turns out, Bob isn’t the only one on Teddy’s tail, and before long, the station falls under siege, an out-of-her-depth rookie, Valerie Young (Alexis Louder), caught in the middle. 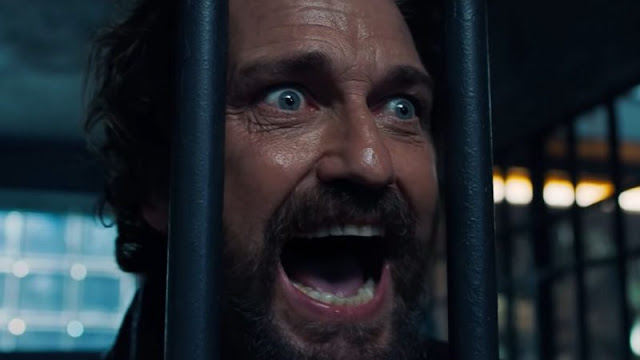 For those even remotely familiar with films of this ilk, Copshop doesn’t pack any surprises plot wise. While the screenplay from Carnahan and Kurt McLeod hits all of the markers—everyone is crooked except Valerie, everyone has an angle, everyone has secrets that gradually come out—it does what it sets out to do well reasonably wall. Full of posturing, this overflows with grim, sardonic humor, chest pumping bravado, and macho back-and-forth banter.

Since Grillo and Butler, who both also produced, are two of the best in game in this regard, the pace pops along, carried largely by their vociferous tete-a-tete between cells and the tension Teddy’s impending doom creates. Into this testosterone-heavy mix comes Valerie. Stoic and no nonsense, and fully unamused by either Teddy or Bob, she fancies herself something of a gunslinger who never backs down. Louder more than holds her own in both the razor-edged repartee and the ensuing gun battles. A compelling, magnetic on-screen force, she steals the show and commands attention—hopefully she’ll have ample opportunity to front more action movies, and soon. It’s her show, at least until Toby Huss (The Rental) arrives on the scene. His unhinged, over-the-top assassin barges in halfway through to chew scenery, hijack the film, and have an absolute blast doing so.

[Related Reading: 'The Raid' Remake is Apparently Back On with Joe Carnahan] 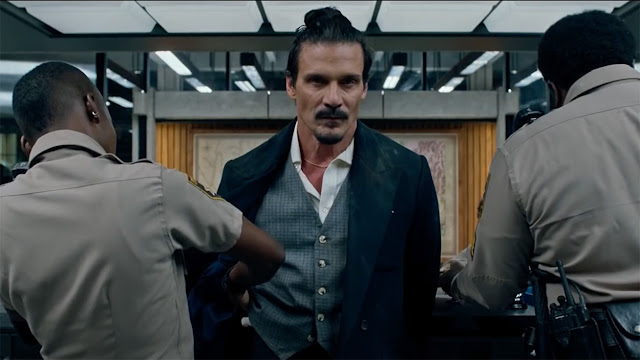 For a moment, Copshop pauses to pretend it has a point or nod to an inherent morality within this shadowy criminal world. The plot and tempo also circle around a bit in the middle, and things threaten to run out of momentum. Fortunately, Carnahan and company unceremoniously abandon any attempted justifications and smash the pedal to the floor. Instead they choose to wallow in the mean-spirited, deeply cynical mire. This is, after all, a movie packed with brutal fights, running shootouts, hyper-masculine characters, pepper spraying open wounds, and Frank Grillo’s unfortunate hair. Seriously, he looks like he will sell you meth. Not even his character, just him.

Copshop also proudly wears its influences. It’s a neo-spaghetti western, from Valerie’s introduction spinning her old-school revolver to bits of Morricone-esque score and day-for-night exterior shots. Other times, the music resembles the poppy synth tunes one might find in a John Carpenter movie, and the film plays like an Assault on Precinct 13 riff. These among many other touchstones litter the screen. 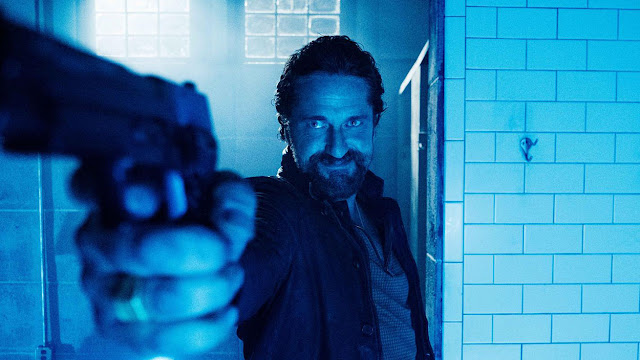 Does Copshop blaze any new trails? No. Nor does it set out to. With the tagline, “Someone’s gotta take the hit,” Carnahan drops exactly the movie he sets out to make. Scuzzy and agro, brimming with bluster and swagger, this is the cinematic equivalent of two hard-asses hard-staring each other, neither flinching. Your mileage may vary, but those so inclined will dig the hell out of what this movie has to offer. [Grade: B]

Posted by Brent McKnight at 1:30 PM