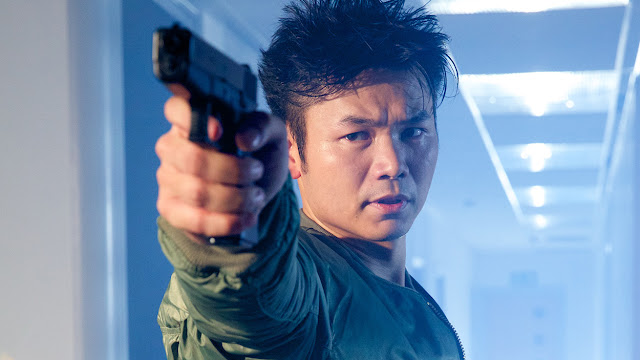 A group of guerilla filmmakers set out to shoot a low-budget zombie movie in a condemned building. Unfortunately for them, a gang of vicious criminals also want to use the soon-to-be-demolished structure for their own nefarious ends. When the crew witnesses a brutal execution, they have to figure out a way to survive. Which more or less means sending their stuntman and master martial artist, Donnie (Jean-Paul Ly), to fight the bad guys.

Set up as a violent action comedy, writer/director Marc Price’s Nightshooters plays like two movies spliced together. The first follows the bulk of the film crew running and hiding and very, very much out of their element as they face off with a crew of largely inept gangsters. It’s the type of material where their lives are on the line, but they’ll pause to let the fussy, grandiose director to be a fastidious ponce for laughs. Then someone gets shot in the head and they run again. 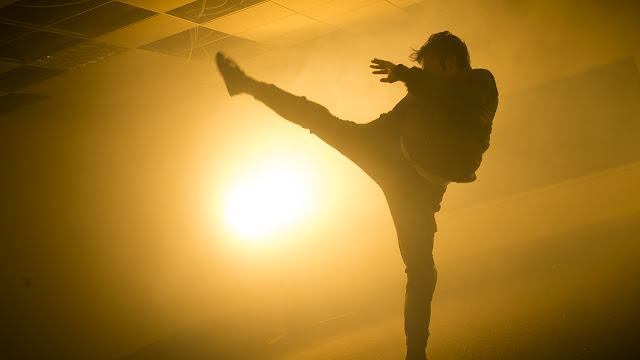 This part of Nightshooters is fine. In the beginning, there’s trouble meshing the disparate tones, the humor and the brutality. As the film goes on, it strikes a balance, especially as it settles into a bleak, mean-spirited world view. A lot of the initial wackiness is forced, like a villain who pees on what he thinks is a corpse for…reasons. It gets tiring in short order. But things do evolve and develop in natural, organic fashion. The crew doesn’t all of a sudden become action heroes; they’re scared and the longer they go, the more exhausted they are, the more their wounds pile up in a way that’s authentic and raw. The gravity, perhaps the inevitability of their situation sets in, which creates intense emotional weight in increasingly desperate moments.

The other part of Nightshooters is basically Donnie kicking all kinds of ass. As soon as possible, the script sends him out on his own where he can tussle with nameless goons. Jean-Paul Ly, if you don’t know him, is a decorated stunt performer and fight choreographer who’s worked on the likes of Jailbreak, The Prey, a couple recent Fast and Furious movies, and tons more. He’s slick and skilled and these scenes, though they feel like they’re from a different movie, are nothing short of showcases for his general badassness. 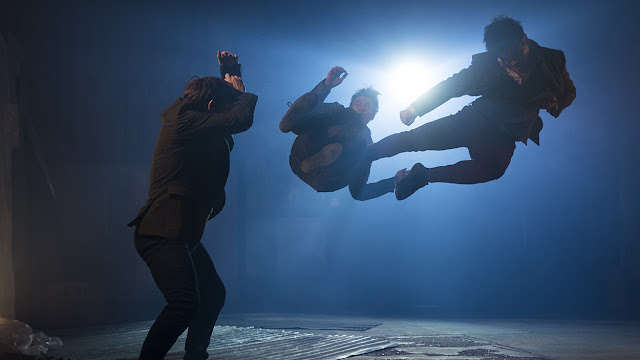 And, as expected, they rule. Ly throwing down against other highly skilled fighters are some of the best hand-to-hand combat moments you’ll see on screen this year. (Though originally filmed in 2018, when it made some festival rounds, Nightshooters has been a long time coming on U.S. shores.) Price (Dune Drifter) and cinematographer Tom Barker (Viking Legacy) do the smart thing and stand back, filming in wide shots and long takes, letting the fight choreography and execution take center stage. There’s not much more to these scenes than cinematic fisticuffs—in a big picture sense Donnie is little more than a bit player and the film doesn’t ask much of Ly otherwise—but when the fights are this good, who cares?

Low-budget and scrappy for sure, in the end, Nightshooters sneaks up on you. What begins as light and inconsequential shifts and grows, and ultimately there are beats that are quietly devastating, and that you don’t see coming. From where and how it begins, it’s unexpected to say the least, and more than welcome. And again, all that intercut with awesome fights. It’s a win-win. [Grade: B]

Posted by Brent McKnight at 2:36 PM